Troubled Blood, the new book by J.K. Rowling under the pen name of Robert Galbraith, is out next week. This is our review before its release. 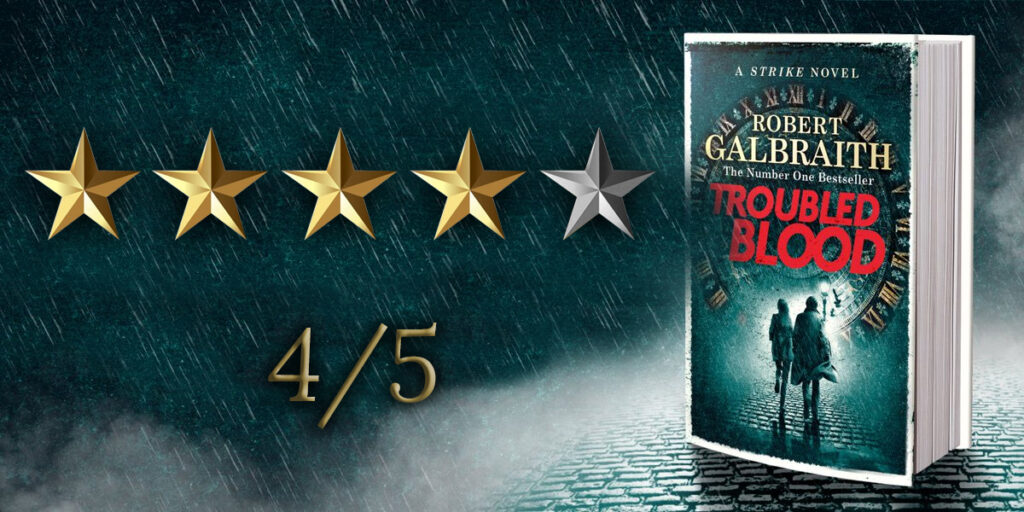 The long awaited fifth installment in the Cormoran Strike series is the longest one, as it happened in the Harry Potter series with Harry Potter and the Order of the Phoenix. But if this is the first time you hear of Cormoran Strike or Robert Galbraith, do not be afraid: it is not completely necessary to have read the previous books to enjoy Troubled Blood because the mystery case stands on its own. And if there are any doubts or questions about what happened in the previous books, J.K. Rowling gives small tidbits of information to brief the reader on the events that precede this novel (which is useful also for those who did read the books but do not remember every detail).

Troubled Blood, as it has been promoted for the past weeks, begins when a woman approaches our favourite detective and asks him to solve the case of a missing woman. The tricky detail on this puzzling request? This missing woman disappeared forty years ago. The characteristics of a cold case make it a very interesting one for our detectives because it is the first time that Cormoran Strike and his now partner Robin Ellacot face something like this. And although there are difficulties in investigating a case of which little remains beyond the memories of witnesses, there are also simplifications: neither Cormoran nor Robin take any major risks. That is why, perhaps, the novel may lack action sequences, but that does not make it any less bearable. On the contrary, the explanations of a case that happened four decades ago are all very well accomplished: through conversations and memories of the different characters who knew Margaret “Margot” Bamborough (the missing woman) and also through the conversations between the two detective partners, who advance the plot with their own conclusions.

As it happens in the previous books, a tangled web of facts and suspicions is presented to the reader, but although at first glance the number of characters and the relationships between them may appear overwhelming (this added to the fact that like in every crime story all characters may be liars and the truth is hidden), the story is very well told and easy to keep up with. It is perhaps one of Rowling’s high points in this novel, along with the realistic dialogues – perhaps the best in her career – and the internal monologues of both Cormoran and Robin. There is also a mystery within a mystery: if in Lethal White the two cases ran in parallel (though feeding off each other), in Troubled Blood we go full meta to find a mystery within the main one: it is the notes (and behaviour) of Bill Talbot, the first detective who officially handled the case, and who in the midst of madness, believed that the answer and solution to it was in the zodiacal signs. Throughout the whole story we are able to see the writings he left on his notebook, not only through descriptions, but also through illustrations of said notebook. Even if Talbot’s notes are not useful and only serve as a distraction, (and here comes a spoiler) we end up without knowing why he was convinced zodiacal signs were the answer. His obsession is left without much explanation and it is just a plot device to distract the protagonists from the real case, a plot device that remains unsolvable at the end of the story.

It is perhaps on zodiacal signs that J.K. Rowling did a great deal of research, and without us knowing, some of that research was included in her Twitter header images, where Tarot cards appeared, and even Alesiter Crowley’s own natal chart, which is mentioned several times in Troubled Blood. This is where Rowling once again shows off as a mystery writer: between ups and downs that involve confessions, talks and red herrings, Cormoran and Robin (because the credit goes to both of them) manage to solve a case that happened forty years ago and they do so, not by using magic and occultism, but by using the scientific and deductive method that identified them in the previous cases. As it mentioned, except in one particular scene, the danger is almost nil and the lives of the protagonists are never felt to be at risk. In fact, the most fervent scenes are unrelated to the main case: situations between Cormoran Strike and members of his family or his ex-fiancée. Cleverly, the couple of detectives are hired for a year, which gives them a temporary constraint: if not, there would be nothing to compete against in the search for Bamborough’s killer.

The title, Troubled Blood, is almost a hint to several symbols that appear throughout the novel, very similar to what Stephen King did with Carrie and all the allegories to blood. In Rowling’s latest novel, one of the characters is a hematologist and suffers from hemophilia, Robin’s new roommate has heart problems, and a blood sample in an old notebook may be a clue to find the killer. But not always are the hints to blood so literal: the story is anchored to the relationships between fathers and sons which are always problematic. From life to death, through abortions and pregnancies, troubled blood is present in one way or another.

Beyond the extensive research that the author does so that every fact and location is real, there are also parts that come directly from her life. What could be a hint to Harry Potter, Robin Ellacott also answers “I am a what?” in a confusing revelation, and there are references to trials that prohibit the release of books, something similar to what J.K. Rowling experienced with the website “The Harry Potter Lexicon”. Another part of the book is also mixed between fiction and real life: a seven-year-old Cormoran Strike is pressed by an older woman at the school gate to receive a letter and hand it to his father, an experience similar to that of Rowling’s daughter when she was still in school. Also, as a joke to herself, Rowling makes Cormoran Strike say “One of her [mother’s] best mates did my full horoscope for her when I was born. I should have recognized that straight off”, when talking about the kind of people his mother used to be friends with. Rowling herself used to create natal charts for her friends’ children when they were born.

The common thread running through all five books so far – and perhaps the million dollar question for readers – is if something finally happens between Robin Ellacott and Cormoran Strike. Spoilers ahead, but fans who were expecting a kiss or even a small love confession will be disappointed. At least both characters seem to have accepted their fate. Every other character seems to agree with most of the readers: they have to be together. The question is not anymore an if now, but when. Although the expectations are not met, that does not mean there are no interesting encounters between them: a heated discussion halfway through the book, and an interrogation sequence that seems on the verge of a romantic conversation at the end could have finished in a different way, if not for a friendly interruption. The readers will probably be happy anyway, but there is always room to see what will happen in the next book, both on a sentimental level and on a mystery one. And although Strike might follow Mazankov’s and Krupov’s steps, we hope that he doesn’t suffer the same fate.

You are reading an article from The Rowling Library Magazine Issue 45 (September 2020).
Download the magazine to read all the articles, and if you like it, you can support us to help us create more content like this.