What is now Windermere Wand Shop started with a party. That’s how Deacon, from Minneapolis, Minnesota, tells the story of this wizarding project that brings magic to people around the world and allows wizards and witches to have their own Pottermore magic wand. Yes, you read that right – Windermere is one of the few wand shops that recreates the wand that Pottermore assigned to you and makes it a reality. 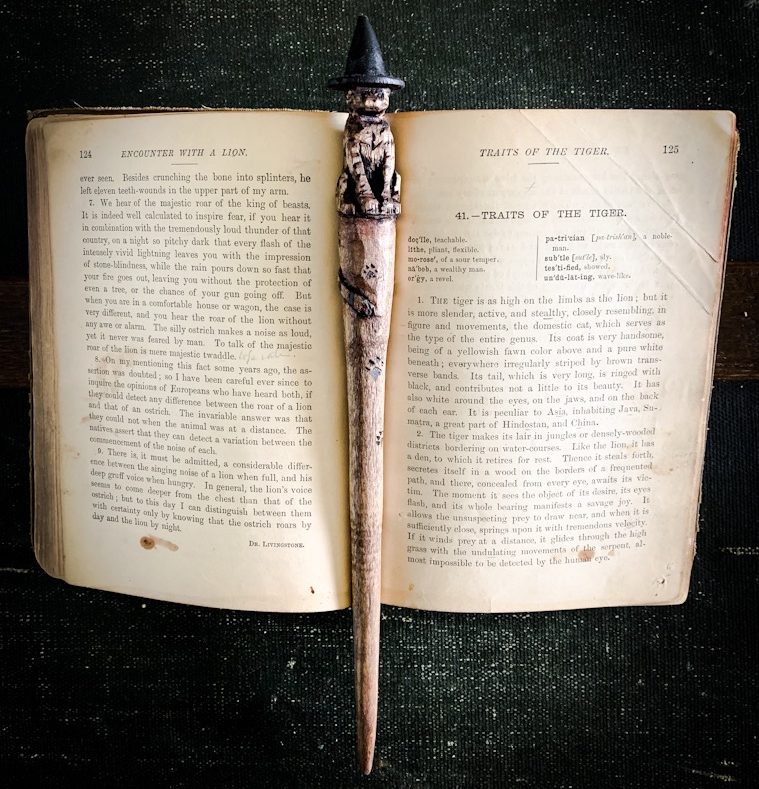 We wanted to know more about the process, the idea and the behind the scenes of this lovely project, so we interview Deacon to learn directly from the real wand maker.

What was your first approach to Harry Potter? Was it through the books or the films?

My first experience was with the books. I was (if I remember correctly) around Harry’s age when I first started, and actually stopped reading right around the time when Hagrid shows up to rescue Harry from the Dursley’s! I had then watched the movies as they came out, and have since read (more devoured, really) the books.

Why did you start making wands? Did you have experience working with wood before?

It’s a funny story – I had been invited to a Harry Potter themed birthday party, and we were told to dress up. I thought that it wouldn’t make sense if I didn’t have a wand, so I went into the yard and grabbed a stick and went to work at it with my bench grinder. People at the party loved it, and started asking for wands of their own, telling me that I should open an Etsy shop.

I did have previous wood working experience from a previous job at a piano restoration company, which was a family business. 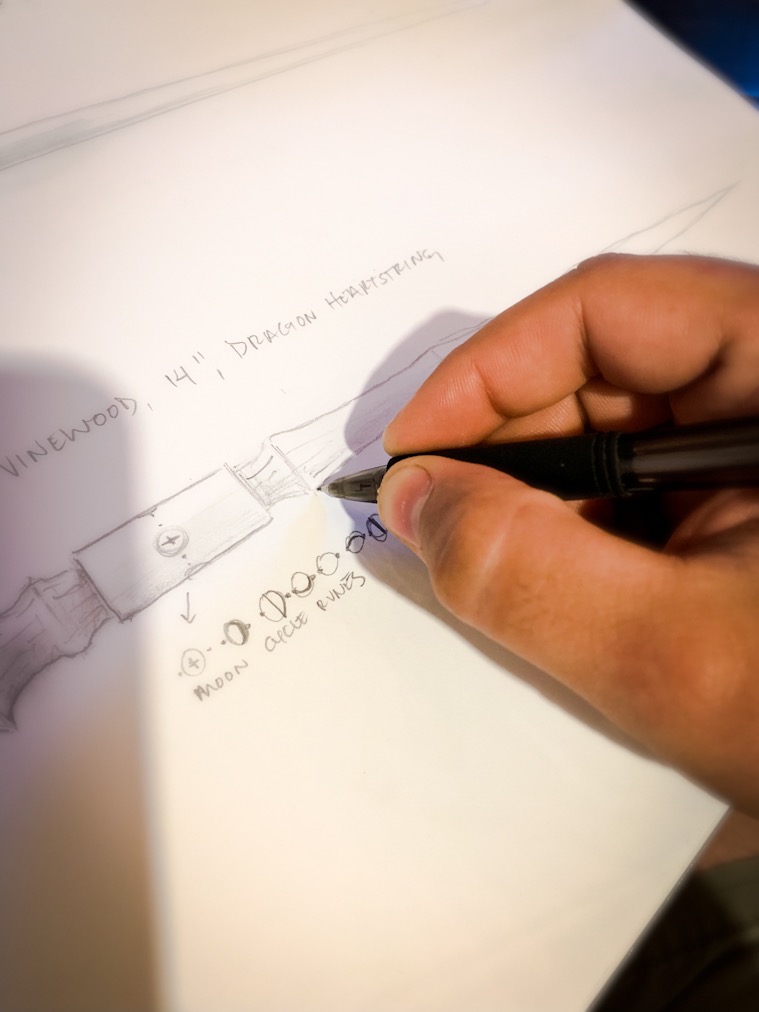 There are a few wand-makers in this Muggle World – what is it that differentiates you from the others?

This was actually kind of a barrier-to-entry for my getting into the wandmaking business. I wondered how on earth I could make any headway with so many others out there. To differentiate, I’ve tried to stay true to the same form of wands that come from the HP universe.

I also have an “aging” process that I use to make the the wands look a bit more realistic. I didn’t want wands looking like they were fresh off a lathe, but were actually made and potentially even used before. This, with my art experience, helps to set me apart, I think.

What is your process to create a wand? How many days does it take?

I start with sketching a few designs based on what the client wants. Then, depending on the design, I’ll take to the lathe or to carving. Usually, I’ll turn the wood to a basic, rough shape, and then do my carving afterward with a dremel tool. Finally, I’ll stain the carved wand, and use an alcohol-based staining process to give it the weathered/aged look.

Depending on the design, wands can take anywhere from 30 minutes to a few days.

When I made my first wand, it was based on my Pottermore stats. The whole Pottermore experience is so personal that it truly feels like the wand choosing you! That’s why I wanted to emulate at least the characteristics of my Pottermore wand.

When it came to the design, it was a bit of a turn-off when I found that Pottermore only had 3 designs for all possible combinations, and that there were potentially millions of other with my same design. I always felt as though Ollivander would have created unique designs for each wand, and I wanted to do the same.

You do your own Wands designs too – what do you use for inspiration?

I often look to the designs of the Harry Potter Universe as a set of guidelines for basic form, but will pull from basic natural themes for the rest. I always ask myself, “Would Ollivander have made something like this?”

Nine times out of ten, they choose custom. Some will stick to the design that Pottermore gave to them, but for the most part they want something actually unique to them. I almost always use the wood-type/length from Pottermore, though.

Yes! These have been a special treat for me. Chris Austin, the owner of Survivor Ties, gets these special woods from the filming sites from the Harry Potter movies. He reached out to me one day, offering a special business deal, and since then I’ve been able to make some incredible wands from wood that the actual actors would have touched! With these wands, I like to make designs that actually speak more to the HP wizarding world, as opposed to something that you would find in Ollivander’s store. I then auction them off!

And last – how does it feel to be a Ollivander in the Muggle World?

Good question! Making these wands has been a much needed respite from some of the hustle and bustle of muggle life. I never would have thought that I would get the kind of support I’m getting, and I have to say that I’m very thankful! 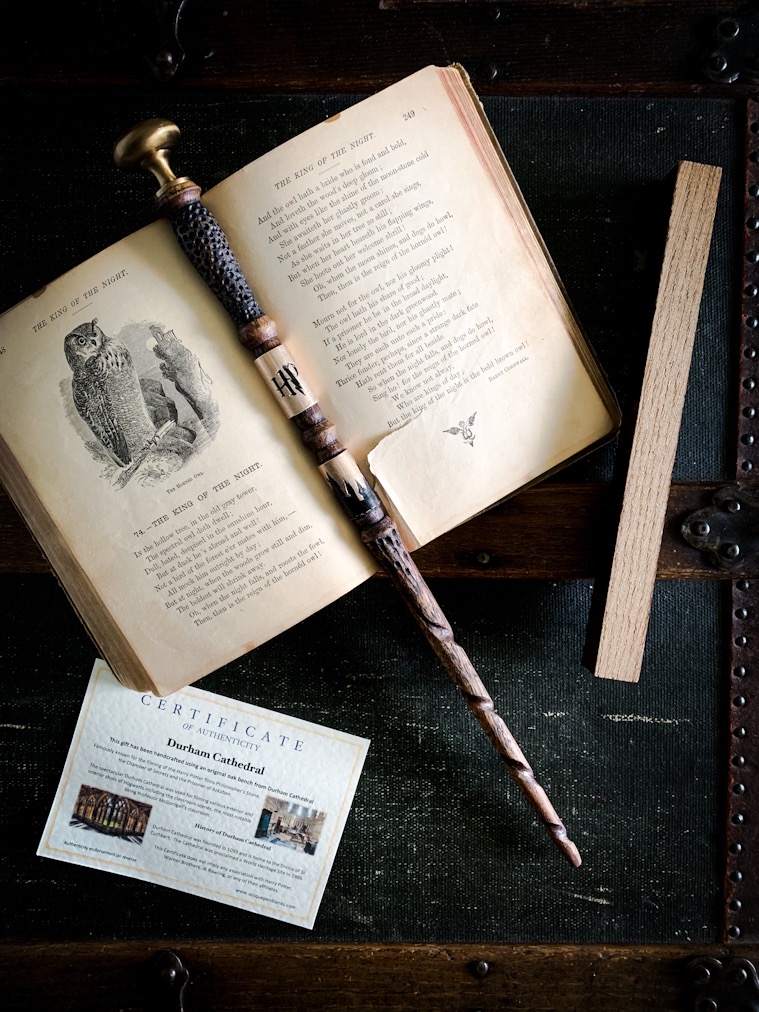 You are reading an article from The Rowling Library Magazine Issue 30 (June 2019).
Download the magazine to read all the articles, and if you like it, you can support us to help us create more content like this.

« Stephen Fry, his low memory and how he pocketed it
Is the Wizarding World still in the closet? »