Besides Dumbledore, Hogwarts was the other thing we were waiting to see back. And with Hogwarts, two devices from the Harry Potter books came with it. In fact, we see them inside the walls of the magical castle: The Mirror of Erised and a Boggart. Both are used to show us the feelings about certain characters, but their original meaning and purpose are changed just for that.

The first one is the Mirror of Erised, which should show the deepest desire of those who look at it. However, for Dumbledore it shows a memory (happy or unhappy, we cannot know yet), but it is used in the film to depict the moment Dumbledore and Grindelwald made their blood pact. If Dumbledore’s deepest desire was to change that moment, he would have seen that: himself avoiding the blood pact, but not the exact memory of that moment. The Mirror of Erised doesn’t show happy memories (Harry doesn’t see himself as a baby with his parents, but a grown-up version with all this family, including grandparents). If the purpose was to show the moment of the blood pact through Albus’ eyes, a Pensieve would have worked better.

Something similar happens with the Boggart. The physical form that this creature takes should inspire terror in the person who is looking at it, not just remind them of a fear. Neville sees Snape, Harry sees a Dementor, Molly Weasley sees Ron’s corpse. It has to give you physical fear. Newt seeing an office desk is just silly – a better form for the boggart would have been a letter offering a desk job for Newt, maybe, but not just a desktop. It doesn’t make any sense (Newt hasn’t a phobia for desks). Something similar happens for Leta. If her worst fear is being discovered for what she did to her brother, seeing something falling in the water won’t make her scared. A smarter boggart would have been an Auror accusing her of killing her brother, or a Ministry employee with an arrest order – but just the corpse of her brother floating in deep water is useless as a fear.

So at the end, we are left with the feeling that both devices, the Mirror of Erised and the boggarts, changed their concept to be used to explain certain aspects of these characters by betraying their original meaning from the Harry Potter books. Although we understand this decision, since it is complicated to explain things or show something without a narrative voice (as J.K. Rowling is used to doing in her books), we would have prefered to leave these magical artifacts to do the work from the original series. 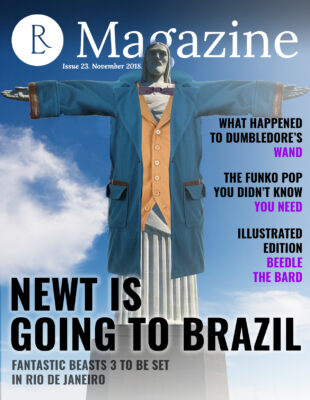 « Blood Pact between Dumbledore and Grindelwald: Does it simplify things?
Scenes from the trailers and posters that didn’t make the final cut of The Crimes of Grindelwald »