Johnny Depp has a history of appearing in public places dressed as his characters and he has now used this move to show up at the Fantastic Beasts panel during the last Comic-Con. We analyze how this can be a safe play for the actor despite angering the fans. 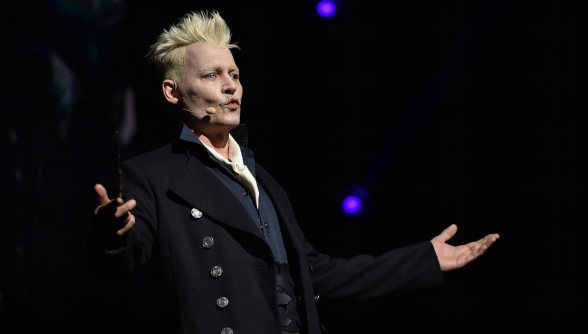 The controversy with Johnny Depp continued when he appeared on the last Comic Con in San Diego after the barrage of complaints made by fans. However, the surprise was not just that Depp was there but that he went on stage in character and delivered a speech as Grindelwald.

Depp’s involvement in the Fantastic Beasts movies has been controversial ever since the domestic abuse allegations by his now former wife Amber Heard were made public. The FB movie production did not make any attempt to remove him from the upcoming sequel and fans have been outraged about keeping Depp in the cast, even though J.K. Rowling released a statement defending their choice of casting with Depp as Grindelwald.

With everything that happened one would have expected to see no sign of Johnny Depp in the promotion of the film, let alone in the same hall his ex-wife was to appear a few hours later promoting her own movie, but the 54-year old actor continues to cause an impact on the audience. Going on stage as Gellert Grindelwald was the only way Depp was able to be be part of such a big event like the SDCC, without the danger of being bombarded with questions he might not have wanted to answer.

The FB press team was smart enough to show off their entire cast, Depp included, and at the same time avoid any uncomfortable situations. But this is not the first time that Johnny Depp has appeared in a public event or place dressed up as one of his characters.

As part of the Disney franchise, Depp showed up many times dressed as Jack Sparrow. He went full character for the D23 Expo in 2015 and in 2017 he replaced the animatronic on the Pirates of the Caribbean ride at Disneyland in California. Both appearances were to promote the upcoming Pirates movies. The latter presentation was after his divorce and the abuse allegations, so it did not cause the excitement that it would have generated prior to this. Also, back in 2016 he also appeared at Disneyland dressed as Mad Hatter and in August 2017 he went to a Vancouver hospital as Jack Sparrow to visit some children.

Even though we see that it is not strange for Depp to be in character in order to interact with the public, his performance as Grindelwald at the SDCC makes us doubt of the true reasons. By doing this, Depp avoids confrontation with the press or fans who dare ask -he even skipped the photoshoot done by Entertainment Weekly with the rest of the cast- but he is still part of the movie promotion. And let’s not forget that the die-hard Depp fans who actually want to see him out there get the chance to do so. And most importantly, it gives Depp the opportunity to be as quirky as he usually is, going around free and pretending to be someone who he is not.

You are reading an article from The Rowling Library Magazine Issue 20 (August 2018).
Download the magazine to read all the articles, and if you like it, you can support us to help us create more content like this.