It was in December 2013 that it was stated publicly that J.K. Rowling and Sonia Friedman Production were going to develop a West End stage play based on the Harry Potter characters. At that moment, it was announced that the play would “explore the previously untold story of Harry’s early years as an orphan and outcast”, but we did not receive further information until 18 months later when, on 26 June 2015, the official title for the project was revealed: Harry Potter and the Cursed Child.

A week before the announcement (on June 18th), The Blair Partnership – the agency representing J.K. Rowling – registered a lot of website addresses. For example, jkrowlingstageplay.com, which now points to the official website of the play. This domain name (as they are called technically) was not the only one registered at the moment: jkrowlingplay.com adds to the already registered harrypotterstageplay.com and harrypottertheplay.com – all of them, of course, redirecting to the formal webpage.

But these three are not the only ones related to cities that The Blair Partnership registered. We got exclusive access to the full list of domains registered on that same date:

Again, if you click on any of them, you will be redirected to the website of Harry Potter and the Cursed Child. Of course, these domain names do not confirm that the play will visit any of these cities, but it could mean that The Blair Partnership had them in mind as places where Cursed Child could be performed.

It is not so crazy after all. Edinburgh is clearly one of the next cities that will host the play. Paris, Toronto, Tokyo, Sydney and Melbourne are large cities with a lot of tourism and a large fandom base, so it is natural that they are the next step. Boston is a really important city in the theather scene in the United States of America, serving as a staging area for shows on their way to Broadway. Chicago is also important theatrically-wise in that country.

Buenos Aires (Argentina) and Athens (Greece) sound impausible, mainly because of their economy situation. Harry Potter and the Cursed Child is a really expensive production and requires a lot of investment – tickets in cities like these could be far from affordable for the fans. But the meaning behind both cities could be more symbolic than anything else. The origins of  theatre were in Greece – Greek tragedy was a popular form of drama in theatres across ancient Greece from the late 6th century BCE, which is why staging the play in Greece could be a nod to the cultural and historical reference of theatre and therefore the choice of Athens.

Although Buenos Aires may be located too south in the continent, it is the largest Spanish speaking city in South America, which could be the strategic centre for the rest of the fans of the continent who want to see the play. It would be natural to receive fans from neighbouring countries such as Uruguay, Paraguay, Chile and Bolivia.

Hopefully many countries at some point will get to see it.
— Sonia Friedman

It is important to highlight that The Blair Partnership decided to register these domains names, even if they are not considering to take the play there. If that is the case, why did they do it? If they are planning to take Cursed Child to other countries, why haven’t they registered the domain names yet? Their reasoning is unknown and mostly private, as everything related to the eighth story, but it still is good material to theorize and try to guess the next destination of the stage play. Let’s not forget that producer Sonia Friedman said “many countries” could get a chance to see the play in future years. She said: “Hopefully more than America, hopefully many countries at some point will get to see it. But it’s a big piece of theatre, it’s a big endeavour, you can’t just turn it around overnight”, so definitely they will try to bring it to as many cities as possible. 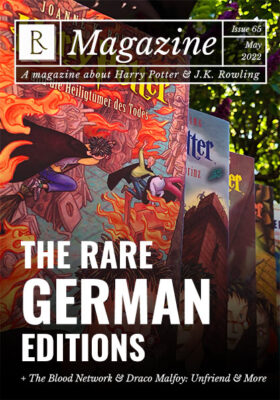 « Round-up of Harry Potter news
Preview: Fantastic Beasts and Where to Find Them Illustrated Edition »