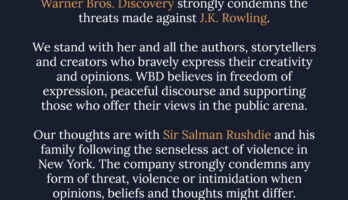 Warner Bros. Discovery has condemned the threats made against J.K. Rowling after she expressed concern author Salman Rushdie, who has been stabbed on stage in New York after years of Islamist death threats. The company has issued the following statement: Warner Bros. Discovery strongly condemns the threats made against J.K. Rowling. We stand with her […]