BBC One’s adaptation of JK Rowling’s Strike series, written under the pen name Robert Galbraith, returned to our screens this past month with its fifth season, entitled Troubled Blood. The new season sees series leads Holliday Grainger and Tom Burke reprise their roles as Robin Ellacott and Cormoran Strike, respectively, as they tackle a difficult cold case involving the 1974 disappearance of a doctor and mother, Margot Bamborough, alongside Robin’s own messy divorce and shifting relationship dynamics with Strike.

One of the standout aspects of Strike: Troubled Blood is the chemistry between Burke and Grainger. Their characters have a will-they-won’t-they dynamic that has been a constant throughout the series, and it reaches new heights in this season. There is a palpable tension between Strike and Robin, and viewers can’t help but root for them to finally get together. Burke and Grainger have a natural chemistry on screen that makes their scenes together a joy to watch.

In addition to the excellent chemistry between the leads, the performances by Burke and Grainger are top-notch. Burke perfectly embodies the gruff and grumpy Cormoran Strike, bringing depth and complexity to the character. Grainger, meanwhile, shines as the determined and capable Robin. She is more than just a sidekick, and is a fully fleshed out character in her own right.

The personal lives of Strike and Robin are a crucial aspect of the series and add layers of complexity and emotion to the story. Robin’s divorce with her unfaithful husband Matthew serves as a constant source of conflict and drama, providing a contrast to the more straightforward mystery at hand. On the other hand, Strike’s strained relationship with his estranged rockstar father and his struggles with his own troubled past bring a more introspective and personal touch to the series. Additionally, Strike’s relationship with his terminally ill aunt Joan adds a poignant layer to the story. As the two characters spend time together in Cornwall, their bond deepens and Strike is forced to confront his own grief and past traumas. The portrayal of their relationship is touching and adds a level of emotional depth to the character of Strike, making him more than just a gruff private detective. The portrayal of Strike’s relationship with his aunt also allows for Tom Burke to showcase his range as an actor, effectively conveying the character’s deep love and pain. These personal storylines not only add depth to the characters, but also create a sense of emotional investment in their struggles and relationships.

The cold case at the center of Strike: Troubled Blood is also a highlight of the season. The disappearance of Margot Bamborough, a young doctor and mother in 1974, is a mystery that is ripe for investigation by Strike and Robin. The case takes them on a journey through the seedy underbelly of 1970s London, and they encounter a number of suspects along the way, including a psychopathic serial killer and an abusive husband. The case is intriguing and keeps viewers guessing until the very end. The show does a good job of slowly revealing clues and suspects as the detectives investigate. The personal stories of the main characters, including Robin’s personal issues related to her divorce and Strike’s relationship with his father, add depth and emotional stakes to the narrative.

Other standout aspects of the TV show is the attention to detail in the production design. The show is set in the 1970s, and the costume and set design perfectly capture the mood and atmosphere of the era. The characters are dressed in authentic-looking clothing, and the sets, including Strike’s office and the various locations the detectives visit, are all meticulously designed to transport the viewer back in time.

Overall, Strike: Troubled Blood is a solid addition to the series. The chemistry between Burke and Grainger is electric, and the performances by both actors are rather impressive. The cold case at the center of the season is also a standout, and keeps viewers guessing until the very end. If you’re a fan of detective shows, or just great acting and dynamic characters, Strike: Troubled Blood is a must-see.

You are reading an article from The Rowling Library Magazine Issue 73 (January 2023).
Download the magazine to read all the articles, and if you like it, you can support us to help us create more content like this. 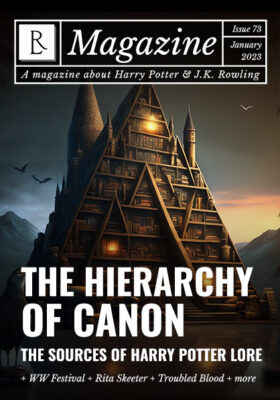 « That Skeeter Woman
J.K. Rowling reveals the title for the seventh book in the Cormoran Strike series: THE RUNNING GRAVE »