After the publication of Harry Potter and the Deathly Hallows, J.K. Rowling kept revealing facts from the lives of the main characters, especially what happened to them after the events of the seventh book. Some of these revelations were done during interviews or reading events, some of them in pieces that she published in Pottermore, and some others on her Twitter account.

The fact that the author has chosen to tell these new facts in different ways and in different sources means that they are scattered in several places and are not easy to read for the casual fan. So we set ourselves a challenge.

Could we take the author’s quotes, from all these chosen sources, and put together a piece that reads as if it were an article written by her? This technique has been done before with other authors. A recent example is Brian Sibley’s The Fall of Númenor, which is an entire novel edited together using different fragments of J.R.R. Tolkien’s manuscripts.

The result is what you can read below. The actual sources are the Today Show1, Bloomsbury Live Chat2, Carnegie Hall3, Pottercast4, A Year in the Life5, “Draco Malfoy”6, “Dolores Umbridge”7, and a few tweets8,9,10,11. The only changes to the quotes were removing some words to join two different quotes, or adding conjunctions to add some flow to the text, especially at the beginning of some paragraphs.

Kingsley became permanent Minister for Magic, and naturally he wanted Harry to head up his new Auror department. Harry did so (just because Voldemort was gone, it didn’t mean that there would not be other Dark witches and wizards in the coming years). Anyone who was in that battle on the right side, Kingsley would want them to help clean up the– I mean, anyone who’s old enough to do it, who’s over-age. But Kingsley would’ve wanted Ron, Neville, Harry and they would’ve all gone, and they would’ve all done the job. And I think that that would’ve been a good thing for them, too. Because to go through that battle and then be relegated to the sidelines, I think they would’ve felt a need to keep going and finish the job. So that would’ve been rounding up, really, the corrupt people who were doing a Lucius Malfoy and trying to pretend that they weren’t really involved.

Harry and Ron utterly revolutionize the Auror Department. They are now the experts. It doesn’t matter how old they are or what else they’ve done.

The Ministry of Magic was de-corrupted, and with Kingsley at the helm the discrimination that was always latent there was eradicated. Harry, Ron, Hermione, Ginny et al would of course play a significant part in the re-building of wizarding society through their future careers. They made a new world.

With the fall of Lord Voldemort, Dolores Umbridge was put on trial for her enthusiastic co-operation with his regime, and convicted of the torture, imprisonment and deaths of several people (some of the innocent Muggle-borns she sentenced to Azkaban did not survive their ordeal). She was arrested, interrogated and imprisoned for crimes against Muggleborns. However, Azkaban definitely does not use Dementors anymore. Kingsley would see to that. The use of Dementors was always a mark of the underlying corruption of the Ministry, as Dumbledore constantly maintained.

The new improved Percy ended up as a high-ranking official under Kingsley. Percy married Audrey. Don’t you think that’s a very Percy-like wife’s name? And they had Molly and Lucy. Charlie hadn’t children or marriage.

No, I don’t think Charlie’s gay. Just more interested in dragons than women. And Victoire (Bill’s daughter), who’s in the epilogue, is so named because she was born on the anniversary of the battle that finished it all. Which is the second of May, if anyone’s been paying attention.

And then Fred. Poor Fred died in 1998. And then George. A lot of readers ask me, “Was George all right?” Of course he wouldn’t be all right, would he? That’s the reality. I can’t- But I think that he married Angelina, who was actually Fred’s ex, so you can… Maybe it’s a bit unhealthy, but I think that they would’ve been happy. As happy as he could be without Fred. I think he would’ve felt like part of himself died. However, he names his first child and son Fred, and he goes on to have a very successful career, helped by good old Ron.

Ron was really done with schooling. It would be kind of tempting to go back to Hogwarts just to mess around for a year and have a break, but he goes into the Auror department. He’s needed. He later joined George at Weasleys’ Wizarding Wheezes, which became an enormous money-spinner.

But Hermione would definitely, definitely go back, and she would want to graduate. She has to get her N.E.W.T.s. And I think that she was– I mean, I love Hermione. She went with Ron and Harry because she has a really good heart. That’s not about brain. Ultimately, she had a bigger heart than she had a brain, and that’s saying something for Hermione. But was she naturally drawn to battle? No, she wasn’t. She’s not a Bellatrix. She’s not a woman who actually wants to be hurting, fighting, killing. Not at all. She would be glad to go back to school, be glad to get back to study, and then would join them at the Ministry.

So Hermione began her post-Hogwarts career at the Department for the Regulation and Control of Magical Creatures where she was instrumental in greatly improving life for house-elves and their ilk. She then moved (despite her jibe to Scrimgeour) to the Department of Magical Law Enforcement where she was a progressive voice who ensured the eradication of oppressive, pro-pureblood laws. I think that she’s now pretty high up in the Department. I would imagine that her brainpower and her knowledge of how the Dark Arts operate would really give her a sound grounding.

Then there’s Ginny, who marries Harry. After a few years as a celebrated player for the Holyhead Harpies, Ginny retired to have her family and to become the Senior Quidditch correspondent at the Daily Prophet.

And Ginny marries Harry and they have James Sirius, godparents Ron and Hermione. They have Albus Severus. He’s the one I’m most interested in. And then, third, Lily Luna, for their dear friend. (Harry left Remus’s name for Teddy to use for his own son. Harry chose to perpetuate the names of the two who had nobody in their families to do so.) And I’ve got a feeling Harry didn’t give the Marauders Map to any of his children, but that James sneaked it out of his father’s desk one day. James was sorted (to nobody’s surprise) into Gryffindor. Teddy Lupin, who was then Head Boy in Hufflepuff, was disappointed.

Teddy was raised by Andromeda. However, unlike Neville, who was also raised by his grandmother Teddy had his godfather, Harry, and all his father’s friends in the Order, to visit and stay with. He is not a werewolf, he’s a Metamorphmagus like his mother. Teddy had graduated the year that Albus was being sorted, but he still came to say goodbye to Victoire.

Slytherin has become diluted. It is no longer the pureblood bastion it once was. Nevertheless, its dark reputation lingers, hence Albus Potter’s fears.

The Malfoys weaseled their way out of trouble (again) due to the fact that they colluded (albeit out of self-interest) with Harry at the end of the battle. Draco married the younger sister of Daphne Greengrass, a fellow Slytherin who was two years younger than he was at Hogwarts. Astoria Greengrass, who had gone through a similar (though less violent and frightening) conversion from pure-blood ideals to a more tolerant life view, was felt by Narcissa and Lucius to be something of a disappointment as a daughter-in-law. They had had high hopes of a girl whose family featured on the ‘Sacred Twenty[1]Eight’, but as Astoria refused to raise their grandson Scorpius in the belief that Muggles were scum, family gatherings were often fraught with tension.

Scorpius has a lot going against him, not least that name. However, I think Scorpius would be an improvement on his father, whom misfortune has sobered!

Here would be a kind of rapprochement, in that Harry knows Draco hated being a Death Eater, and would not have killed Dumbledore; similarly, Draco would feel a grudging gratitude towards Harry for saving his life. Real friendship would be out of the question, though. Too much had happened prior to the final battle.

The DA naturally kept their coins. They would be like badges or medals of honour – proof that the owner had been at the heart of the fight against Voldemort from the start! I like to imagine Neville showing his to his admiring pupils. As you know from the Epilogue, Neville ends up becoming the Herbology teacher at Hogwarts. But, to make him extra cool, he marries a woman who becomes – eventually – the new landlady at the Leaky Cauldron… which I think would make him very cool among the students, that he lived above a pub. He marries Hannah Abbott.

Luna became a very famous wizarding naturalist who discovered and classified many new species of animals (though, alas, she never did find a Crumple[1]Horned Snorkack and had, finally, to accept that her father might have made that one up). She ended up marrying (rather later than Harry & co) Rolf Scamander, who is a fellow naturalist and the grandson of the great naturalist Newt Scamander. So they’d have a very interesting life, globetrotting and looking for weird animals. But I think she’d have twin boys. Lorcan and Lysander. But later. That would be much later than this lot who all settled down earlier. And later than her friend Cho who married a Muggle. The Quibbler is doing pretty well, actually. It has returned to its usual condition of advanced lunacy, and is appreciated for its unintentional humour. Rita is doing well too. Naturally, what could stop Rita? I imagine she immediately dashed off a biography of Harry after he defeated Voldemort. One quarter truth to three quarters rubbish.

Hagrid never did marry and have children. Realistically, Hagrid’s pool of potential girlfriends is extremely limited. Because with the giants killing each other off, the number of giantesses around is infinitesimal and he met one of the only ones, and I’m afraid, she thought he was kind of cute, but she was a little more, how should I put it, sophisticated than Hagrid. So no, bless him, no.

The rest of the centaur herd was forced to acknowledge that Firenze’s pro-human leanings were not shameful, but honourable.

You are reading an article from The Rowling Library Magazine Issue 71 (November 2022).
Download the magazine to read all the articles, and if you like it, you can support us to help us create more content like this. 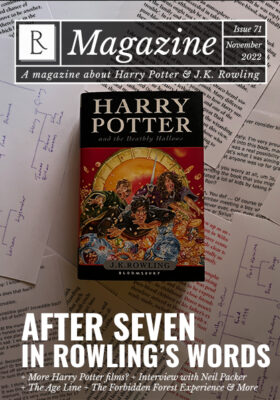