Harry is briefly erased from Four Privet Drive early in Harry Potter and the Chamber of Secrets as the Dursleys prepare for a dinner party. Aunt Petunia has made the boy work like a House-elf. He cleans the windows, washes the car, mows the lawn, trims the flower beds, prunes and waters the roses, and repaints the garden bench. Then he is confined to his bedroom. Also it is his birthday, an event celebrated by nobody in the house or beyond.

“I’ll be in my room, making no noise and pretending I’m not there,” he says. For a moment Harry is a non-person, less than the meanest ghost. Solitude and neglect come into sharp focus, and trigger an existential crisis. Harry alone in Little Whinging knows he is a wizard hero who only weeks before defeated the evil Lord Voldemort. But at Privet Drive he is a freak. He’s a weirdo. What the hell is he doing there? He doesn’t belong.

From a purely psychological point-of-view, Harry’s identity suffers a schism. Dobby the House-elf has the same bright green eyes as Harry Potter. He is slave to an evil family. And he recognises Harry’s greatness. Harry treats him “like an equal”. But the Dobby personality cannot be contained: the House-elf is an expression of repression, and an uncontrollable force of chaos, and Harry’s rebelliousness made manifest. Nobody – not the Dursleys nor the Ministry – thinks anyone but Harry dropped that trifle.

Meanwhile, Ron Weasley feels like a spare wheel among his large family: he wants them to notice when he’s not around. Harry and Ron are shut out of Platform Nine and Three Quarters, and neither of them think to alert an adult. Their solution is to steal Ron’s father’s illegally enchanted Ford Anglia and to fly the turquoise automobile to Scotland. Any sense of non-existence is sharply reversed. Now they have everyone’s attention. Harry goes from non-being to talk-of-the-town: a case of overcompensation. “Wanted to arrive with a bang, did we boys?” sneers Severus Snape.

On Knockturn Alley, Harry overhears Draco bashing his character. Harry is, according to his school rival, famous but nothing special, popular but not talented. Harry then meets Gilderoy Lockhart, who is popular and famous despite limited talent. Together Harry and Gilderoy make the front page of the newspaper. “Bet you loved that, didn’t you Potter?” snides Draco. In his heart, Harry carries the idea of not deserving the attention, not being worthy, not belonging. Gilderoy Lockhart, the empty vessel, is another expression of this fear.

In Book One Harry had to adjust to being a wizard. In Book Two Harry begins to wonder what kind of wizard: a fraud? a Slytherin? Slytherin’s heir? The thought of not being a Gryffindor troubles him deeply. A major theme of the book is intolerance of those who are different, notably Muggle-borns, and Harry faces this tension within himself. Where does an eternal outsider call home?
Hogwarts is compromised. At the so-called freak school Harry becomes the freak, the destructive force, widely considered responsible for the Basilisk attacks. His gift for speaking with snakes turns into a curse, the mark of a dark artist. Even Snape is briefly impressed.

Modest Harry cannot understand why anyone thinks he is publicity hungry. He’s just an ordinary boy: teachers’ favourite, the sole living invitee to a ghost’s death day party, chatting with a magic diary, arguing with a giant spider, abducting a teacher at wand-point, being star player on his House’s glamorous Quidditch team, pursued by an 11-year-old Paparazzo, sneaking about under the Invisibility Cloak or under the influence of Polyjuice Potion, and rescuing his murderous would-be girlfriend from a 1000-year-old monster.

In his darkest moment, with death bearing down, Harry finds his true character there inside him all along. Harry lacks faith in himself and in others, but these doubts are just doubts, representative of a lack of confidence: his friends DID remember his birthday, he DOES belong in Gryffindor. He pulls the Sword of Gryffindor from Godric’s old hat, echoing an iconic moment from the legend of King Arthur: the extraction of the sword from the stone1. The once and future king emerges. The hero rises.

Harry chose Gryffindor House, just as later he chooses to die and chooses to return from death, and the choice was true. Harry, in the Chamber of Secrets, reveals himself already as Dumbledore’s man through and through; here an instinct confirmed by the arrival of the phoenix, in the later books another brave choice.

“It is our choices, Harry, that show what we truly are, far more than our abilities,” concludes Dumbledore in the final chapter of Chamber of Secrets. Harry’s identity crisis is temporarily resolved. Lockhart’s chicanery is ended. Dobby is liberated. These unhappy expressions of Harry’s fractured personality have found a certain peace.

But the fractures are not healed. In Prisoner of Azkaban, Sirius Black is furious vengeance escaped from hell. With his scruffy clothes and messy hair the titular prisoner is curiously attuned with the Boy Who Lived. Harry, his grief unlocked by Aunt Marge and later the Dementors, discovers an anger that he struggles to control, and makes his own parallel prison breaks, from Four Privet Drive and into Hogsmeade. Harry-Sirius finally resolves not to do murder, the illusions lift, anger abates, and Harry’s heart fills with happiness: “Expecto Patronum!”

Only at the end of the series, finally empowered by the whole truth, does Harry become his own man through and through, the chosen one.

Footnotes:
[1] The Disney film The Sword in the Stone, a story of the young King Arthur, influenced the author on aspects of the Harry Potter story, including the character of Vernon Dursley. 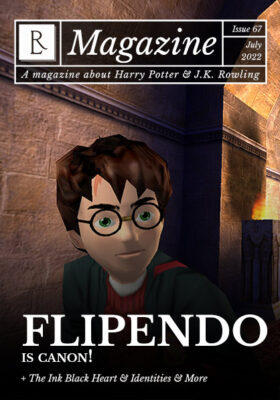 « Cover and synopsis of The Ink Black Heart
Flipendo! is canon »