Monday. 2.30 pm. I was having a delicious plate of pasta carbonara when my bell rang. I did not know who could be ringing at lunch time, but I opened the door anyway. A young postman handed me a rectangular envelope; I thanked him and returned to the living room. I was about to keep eating when the shape of the envelope called my attention. It seemed to have a book inside, and I could not resist the temptation to open it. A remarkably familiar drawing of a young Harry Potter arriving at Platform 9 ¾ welcomed me. I literally jumped off the chair.

A few minutes later, the pasta carbonara was cold, but I did not care. The new Harry Potter and the Philosopher’s Stone 25th anniversary edition was in my hands, and I found myself navigating through the pages of a story that changed my life. The cover was extremely similar to the one launched 25 years ago: the title at the top of the page, the very same Hogwarts Express and a curious Harry contemplating the platform. A silver sticker indicating the 25 anniversary edition was placed at the bottom left side, and the name of the publishing house at the very bottom (instead of the usual “Triple Smarties Gold Award Winner”). The cover has a significantly better quality than the original one. I was extremely excited because I finally had the hardcover edition of an epic literary saga, which is a great present for the fans that did not have the opportunity to buy it when the book was released.

Then, I turned it to see the back cover; I already knew it would have the picture of Dumbledore, but the geeky part of me was hoping to find the brown-bearded wizard from the original edition. The synopsis is quite simple, but it hints at the magical and wonderful adventure you are about to embark upon once you start reading.

And there came the moment I was looking forward to the most: opening the book. The initial pages are the usual ones, but the first surprise comes in the dedication part. Next to the famous: “for Jessica, who loves stories, for Anne, who loved them too, and for Di, who heard this one first” is the inaugural JK Rowling original drawing. Peeves the Poltergeist, smirking at us in his goofy hat and jester clothes. It is great to see this creature as Rowling imagined it, and maybe most of the fans will find it quite curious.

Right before the beginning chapter, there are two big illustrations which, in my opinion, are perfectly placed. The first one is a whole single page drawing of Hagrid, Dumbledore and Professor McGonagall looking at a baby Harry covered in blankets under a starry sky. This is an early illustration that Jo made years before the publication of the book, and personally it is my favourite one. Seeing the characters hand-drawn by the writer herself gives me immense nostalgia. That hand that held the pencil did not know what was coming, and seeing this particular one, which is the beginning of everything, makes my heart shrink.

Following this illustration, we can see a quote of the writer herself, claiming: “The book that changed my life” (and it changed many more, Jo, I assure you). Right after it, there is a double-paged drawing of the entrance to the Diagon Alley; an umbrella touches the centre of a brick wall, which slowly and magically opens to reveal the first shops in the alley. It is an invitation to go into the Wizarding World through the secret entrance in the back of the Leaky Cauldron (and believe me, we are going to enter headfirst!).

All of the above serves as an introduction to the story. The well-known chapter titled “The Boy Who Lived” starts, and my eyes could not resist the temptation to read it through. The design and layout of the text, as Bloomsbury announced, had been modified as though by a repairing charm. The title chapters have tiny stars surrounding the letters, exactly as the new editions Bloomsbury launched a few years ago, featuring the Jonny Duddle renewed jackets, and the letter font enables an easier and comforting reading.

Right after finishing with my initial check of the new copy that I received, my stomach grumbled and urged me to continue eating my pasta carbonara, but I ignored it, and as a fully qualified Potterhead, kept on looking into the book. I was searching for new Rowling illustrations in between the chapters, or any additional item that called my attention. In fact, I flipped through the pages several times thinking I had missed something. I did not.

I was slightly surprised. I imagined the book would have more illustrations; I expected it to imitate a children’s book, with drawings every few chapters. I knew Jo had several more pictures of her characters, because she showed some of them in documentaries and uploaded others to her website. Filch the caretaker, Harry in front of the chimney in Privet Drive, the Weasley family, Snape with his greasy hair, some students playing quidditch, professor Sprout… None of them were included in this edition, unfortunately. I believe they could have taken much more advantage of this anniversary of the book that would become the beginning of an era, adding original illustrations or never-seen-before material from Jo. It is interesting to note that none of the drawings were novel, and any Harry Potter fan curious enough to navigate the Internet would have found them.

The last pages are dedicated to the Potter phenomenon, including early letters from kids all around the world (it even displays the very letter written by Alice Newton to her father, the Bloomsbury Founder, which is said to be the reason he decided to publish it. Thank God!). Contained in small boxes between the letters, we can find curious facts about the saga, a map of Hogwarts illustrated by Levi Pinfold and the fourth and last Rowling drawing: an early sketch of the Sorting Hat. Finally, the last four pages share the story of how Thomas Taylor, the illustrator of the cover, got the job to draw what would become the cover of the best-selling book. I really liked this glimpse to the behind the scenes, since I had no idea who Taylor was and how he created both the drawing of Harry arriving at the Platform and the wizard from the back.

To conclude this review, the 25th edition of Harry Potter and the Philospher’s Stone is a nice book to add to your collection, especially if you like details such as Rowling’s illustrations and the story of how this book came to life 25 years ago, when nobody expected the phenomenon it was going to become. It could have been better, if it included more material from the author herself, or even something unknown to the fans, but overall it is a nice edition that will look amazing on your shelf (and for those wondering, yes, I finished my pasta carbonara. It was delicious. Cold, but delicious).

You are reading an article from The Rowling Library Magazine Issue 66 (June 2022).
Download the magazine to read all the articles, and if you like it, you can support us to help us create more content like this. 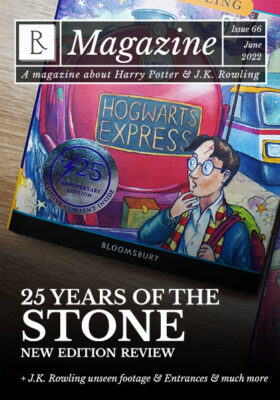 « What is “Harry Potter: Magic at Play”?
Video: J.K. Rowling pranked by Russian duo Vovan and Lexus over Zoom call »