The first trailer for Fantastic Beasts: The Secrets of Dumbledore showed a few new creatures from the Wizarding World, and one of them was this one that looks like a crab/scorpion, depending on how you look at them:

We were in the dark about which new creature this was, until last week. In a Fan Event held in Tokyo for the third film, David Heyman said these creatures were small manticores (you can watch the full quote here):

“It was a specific movement he [Newt/Eddie] was trying to achieve, which was imitating the movement of the small manticores that he comes across earlier in the sequence.”

This was received with mixed feelings among the fans, since manticores are mythological creatures (Persian origin) well defined: “[The manticore] has the head of a human, the body of a lion and a tail of venomous spines similar to porcupine quills, while other depictions have it with the tail of a scorpion.” 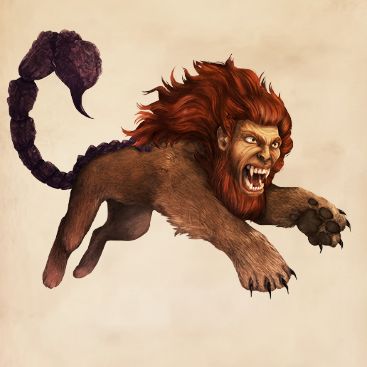 It is, in fact, this description the one used in the Wizarding World in different books and products. The beast is mentioned twice in the original textbook Fantastic Beasts and Where to Find Them (2001):

Acromantulas and Manticores are capable of intelligent speech but will attempt to devour any human that goes near them. The sphinx talks only in puzzles and riddles, and is violent when given the wrong answer.

The Manticore is a highly dangerous Greek beast with the head of a man, the body of a lion and the tail of a scorpion. As dangerous as the Chimaera, and as rare, the Manticore is reputed to croon softly as it devours its prey. Manticore skin repels almost all known charms and the sting causes instant death.

Even in the queue for the newest Harry Potter attraction at Universal Orlando (Hagrid’s Magical Creatures Motorbike Adventure) you can see a poster of an adult manticore (thanks HarryLatino):

Considering the substantial differences between the well known manticores and the creatures from the trailer, we contacted David Heyman directly to ask him if he made a mistake during the Japanese interview, or if those creatures were in fact manticores. The reply from his office doesn’t leave room for doubts: “I can confirm that the creatures are baby manticores.”

What’s left to know if it is going to be an in-universe explanation for the look of the baby manticores (they change as they grow up, for example), or if this new appearance it is how they are going to be in the cinematic Wizarding World.

« Warner Bros registers “Harry Potter: Magic At Play” domain (and Twitter account?)
First look at the new Illustrated Edition of Harry Potter and the Order of the Phoenix (Cover and Inside) »