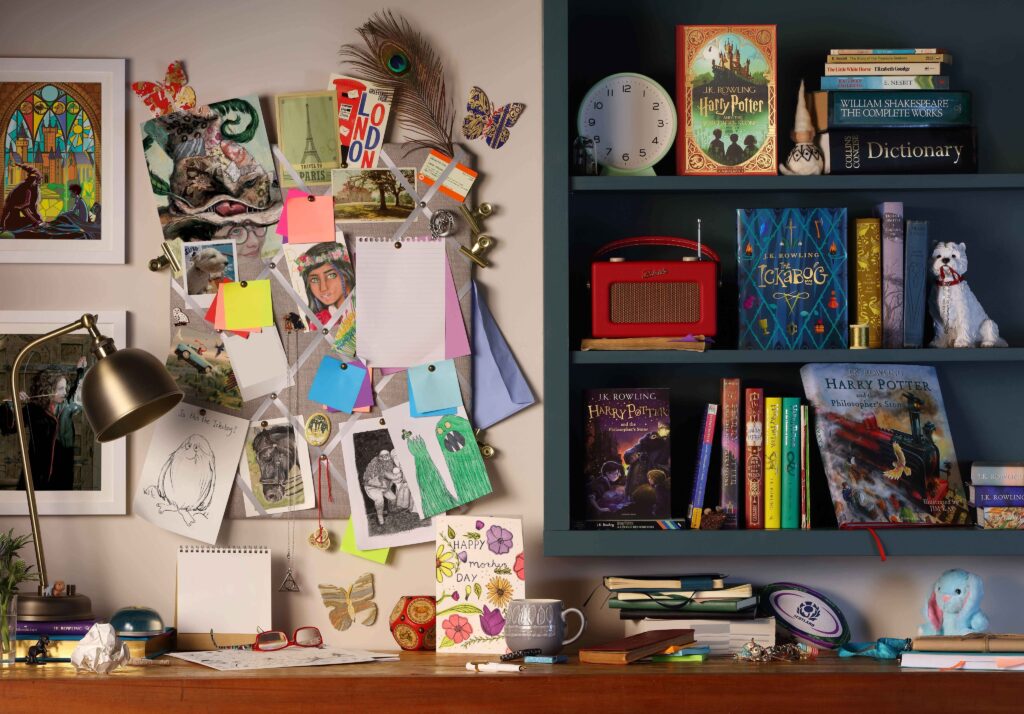 Do you remember the times when J.K. Rowling used to have a website showing her desktop, with easter eggs, secrets, frequently asked questions, and content written in first person? Well, those times seem to be back. On September 9th the launch of a new online hub for younger readers was announced, where they can discover and learn more about the different stories by J.K. Rowling which are considered for children.

The official press release confirms what one can expect: this new online hub’s launching is to celebrate the upcoming publication (less than one month ahead) of The Christmas Pig, the first novel by J.K. Rowling for children since Harry Potter (remember she doesn’t consider The Ickabog a novel, but a fairy tale). The same press release from her team confirms a suspicion that we had about the creative process of The Christmas Pig: “A stand-alone novel about one boy’s love for his most treasured thing and how far he will go to find it, The Christmas Pig was the children’s book J.K. Rowling intended to publish next after Harry Potter – until the worldwide Covid pandemic took hold and The Ickabog project became her priority.” (This is also repeated on the website, but it is interesting to note that Rowling’s PR team decided to include it on the bulletin they sent via email). It seems that this new novel was the children’s novel she mentioned several times in different interviews since the publication of Harry Potter and the Deathly Hallows.

This new website, which is titled J.K. Rowling’s Stories, has divided her official website into places or sections. If one visits www.jkrowling.com (Rowling’s official website), one will find a new welcome page with two entrances or links. The one saying “Grown up gateway” leads into the website that was live until a few days ago as the main one, which contains news, press releases and articles related to her adult works, such as the Cormoran Strike books. The second link, which reads “Children’s entrance”, leads to this new website, which can be accessible through two different addresses: stories.jkrowling.com and jkrowlingstories.com. 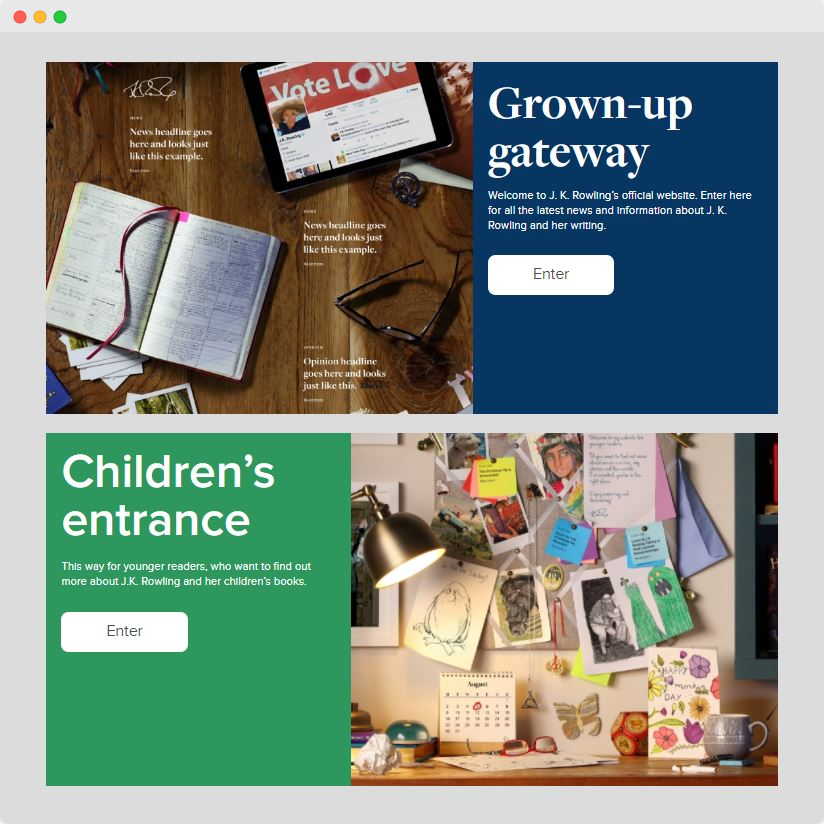 This new website welcomes its visitors with a desktop imagery that will trigger some nostalgic feeling to those who were able to experience Rowling’s old website. And the first thought that most of those people will have is “Does this website have easter eggs too?” And there is some good news and some bad news about it.

The good news is that the website is not created using Macromedia Flash, but Javascript, which allows you to “easily” inspect its code. The bad news is that… no, there aren’t secrets or easter eggs, at least not like the ones we were used to.

The desktop area (which is only present on the welcoming screen because after you click on any section, it is gone) is the one that holds these “secrets”. These are accessible after clicking on some of the objects present on the desktop, the shelves or pinned on the wall. The revelations sometimes are texts (written in first person, as if Jo had written them), sound effects, or both. Clicking on some of the items will take you to one of the inner sections of the website, such as “My Story”, “Harry Potter” (more on this later), “The Christmas Pig”, “The Ickabog”. The items that reveal secrets display a message (such as the dog photography or the Paris postcard, among others), reproduce a sound (like the paperweight or the stack of books), or change some visualization (like the lamp or the clock). 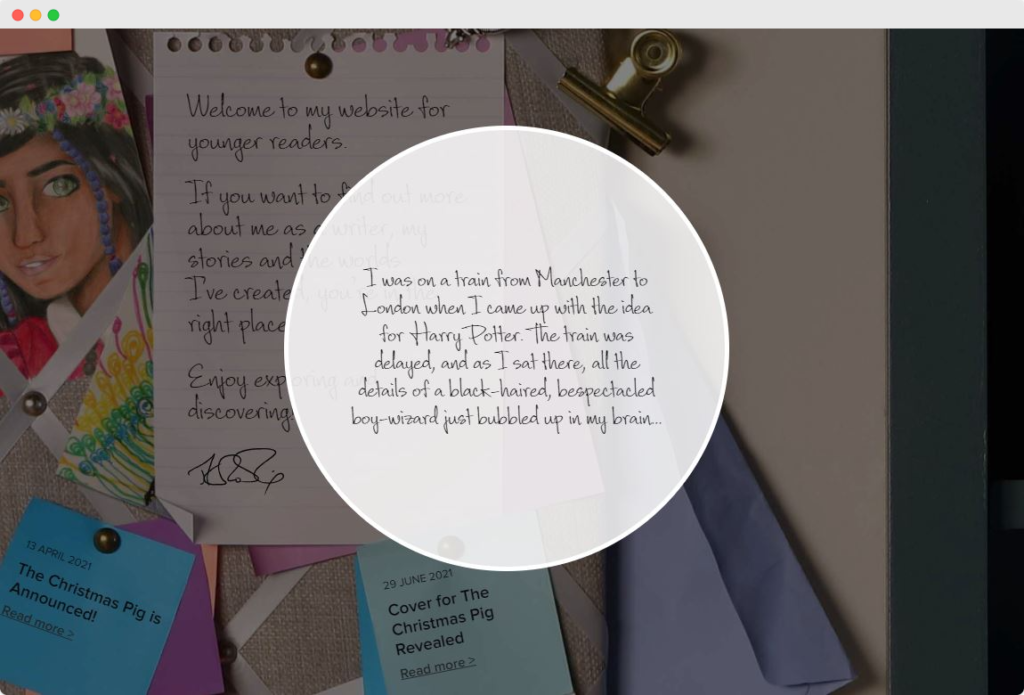 Besides the sections mentioned before, there is one called “Book news”, which only shows news that were posted on her previous/adult website, but are related to her children’s publications as well, such as the cover reveal for The Christmas Pig, or the original announcement for The Ickabog.

The My Story section is a short auto-biography penned by Joanne, which at the end includes ten frequently asked questions, answered by the author herself. Interestingly, there is the question “How do you manage the different fictional worlds you’ve created?”, to which she answers “[…] I imagine the different fictional worlds as different rooms to which I have access.  At worst, when entering one of the rooms, I have to spend a bit of time re-orientating myself, finding my bearings again, checking what I’ve put in which drawers.[…]”.

The Christmas Pig section is an introduction (again by Rowling), with three questions and answers: “There are many classic stories which are set at Christmas-time. Is this setting important to you?”, “If you had to describe the character Jack in three words, what would those three words be? How about The Christmas Pig?” and “How different was it to plotting out the Harry Potter series? Is there any magic in The Christmas Pig?”. There is also a short video interview, where Rowling answers these same questions. 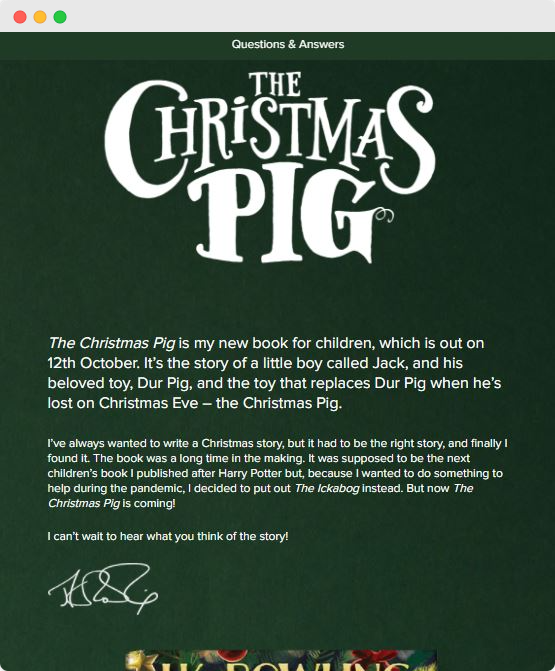 The Ickabog section has a welcome message as well, although it is just an updated version from the welcome message that was shown on the old Ickabog website. It also includes some information about the illustrators competition and activities for children, and a new FAQs section with nine questions, which ends with “At the moment there are no plans to make a movie or stage adaptation of The Ickabog.”

The Harry Potter section is probably the most interesting one. The welcoming message (“I could not have imagined in my wildest dreams just how popular my Harry Potter books would become and at times it was truly overwhelming.”) introduces us to the inner sections about the boy wizard. “The Harry Potter Stories” lists the ten books about the Wizarding World written by J.K. Rowling (note that they don’t include Harry Potter and the Cursed Child), and links to the external websites about Fantastic Beasts and the already mentioned stage play. “The Magical Journey” section is a captivating idea: go over the phenomenon from its beginning, but it falls short: it is only a five-paragraph text, with a one minute video and a gallery with fewer than ten images. It is a good introduction, though it could be much more. 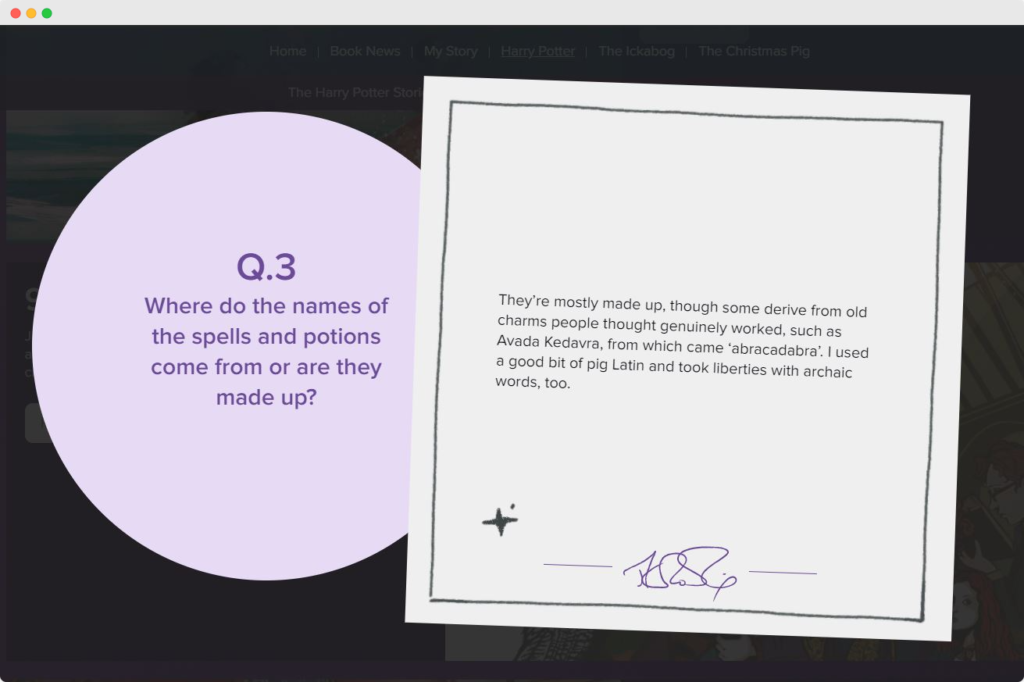 Finally, the last subsection for Harry Potter is “9 and ¾ questions”, where Rowling answers FAQs about the Wizarding World. From saying “I have always refused to say ‘never’ to this question” when asked if there is going to be another Harry Potter book, to confessing that she thinks “Dudley’s out there living a happier life and better life for having known Harry”, the FAQs related to our favourite wizard are just a glimpse and it shows that Rowling still can provide more material for the Potter fans.

J.K. Rowling Stories could become the perfect mix between the old Rowling’s website and the Pottermore version that delighted fans around the world with new content written by the British author. If we also add some easter eggs, it could be the perfect online hub, not only for younger readers, but also for the big mass of Rowling’s followers who are hungry for more information about her past, present and future works.

Even if there are not many easter eggs (yet), fans will convince themselves that there are hidden messages. Some people are already saying that showing an American edition of Harry Potter, together with a French version, and then a German translation, is the confirmation that Fantastic Beasts will mostly take place in Germany. J.K. Rowling can be sure that her readers will find answers in the places where there are no answers at all. 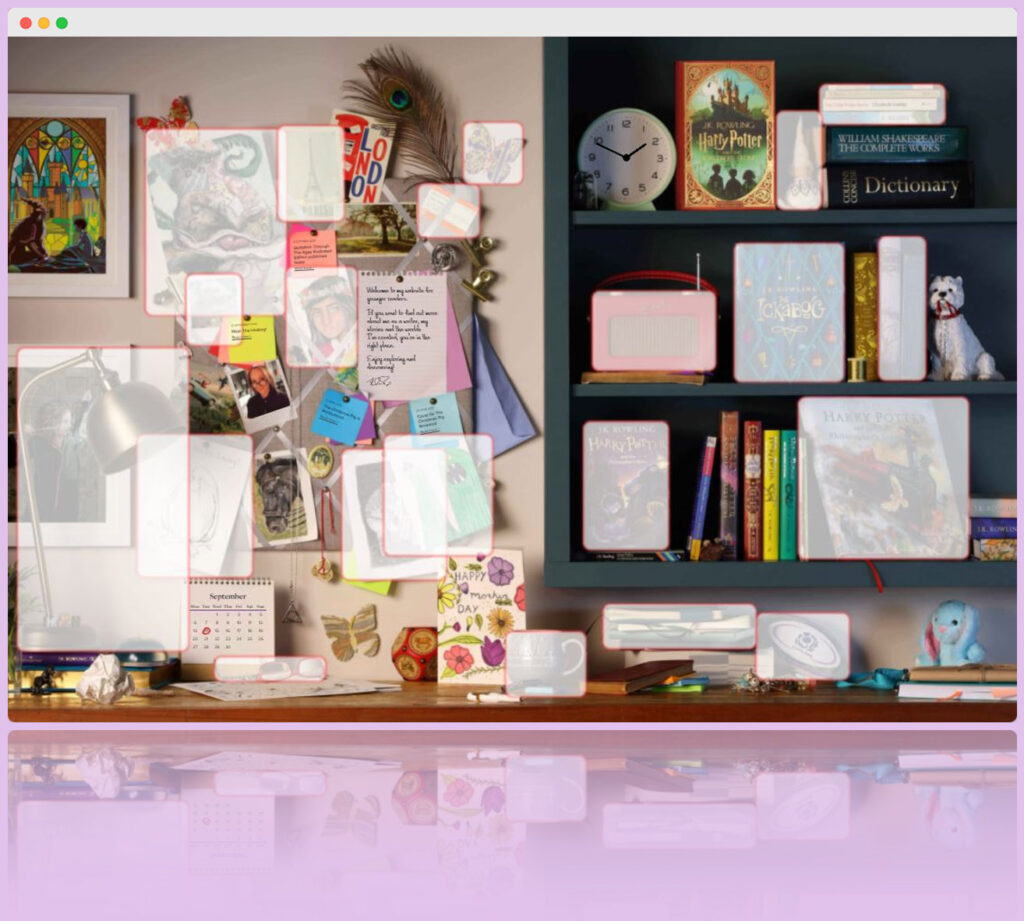 – Keys: They will make a keychain sound if you click on them.

– Tea cup: A message will be shown if you click on it.

– Rugby oval ball: A message is displayed when you click it.

– Lamp: The light will switch on and off when clicked.

– Dog photography: A message is shown.

– Radio: You can listen to some audios, such as Stephen Fry reading from the audiobooks or Rowling reading from The Ickabog.

– Polaroid: No need to click, but it is animated and shows Rowling holding a Philosopher’s Stone copy (from the Harry Potter At Home reading)

– The clock: It shows the current time in the United Kingdom and if you click it, you can hear a ticking clock sound effect.

– Calendar: It has the current date circled in red.

A curious fact is that the new logo for this online platform doesn’t use Rowling’s own handwriting. The font used in the logo (and in different parts of the website) is Corradine Handwriting Rough, created by Colombian designer Manuel Eduardo Corradine. 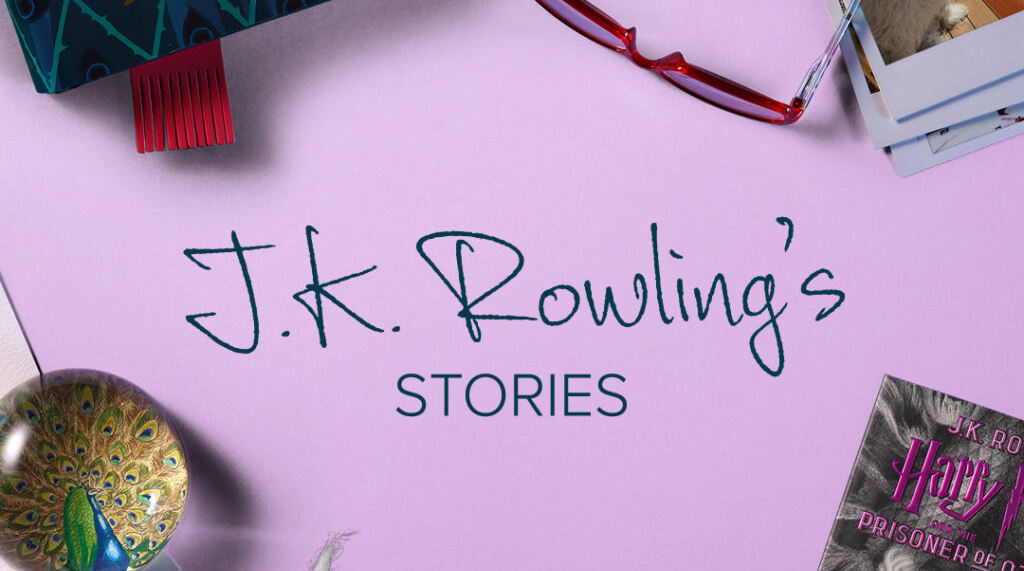 You are reading an article from The Rowling Library Magazine Issue 57 (September 2021).
Download the magazine to read all the articles, and if you like it, you can support us to help us create more content like this. 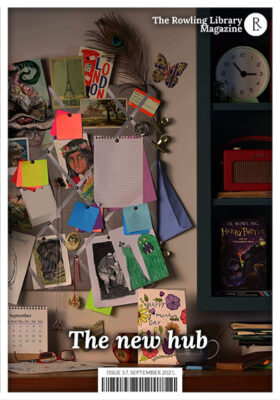 « Two illustrations from The Christmas Pig revealed
Fantastic Beasts: The Secrets of Dumbledore to hit theaters on April 15, 2022 (and first synopsis!) »