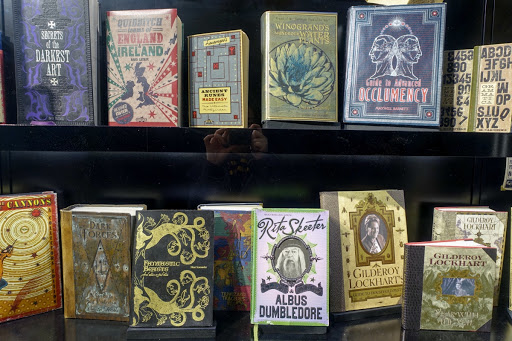 Books clamor for attention in ‘Harry Potter’. They have immense influence and value in the wizarding world. From the school reading list to the biography of Albus Dumbledore, books are vital to each story. Love of books is a unique facet of the series. More than 100 titles are referenced in the chronicles of Harry Potter.

Books can power the plot. Tom Riddle’s Diary drives ‘Chamber of Secrets’, charms Harry and possesses Ginny Weasley. The villain IS the diary! In Book Six, Harry is similarly seduced by Libatius Borage’s Advanced Potion-Making, property of the Half-Blood Prince. Harry connects big-time with the Prince, aka the teenage Severus Snape, whose notes somewhat fill the void left by recently-deceased godfather Sirius Black.

‘Deathly Hallows’ includes two distracting tomes: The Tales of Beedle The Bard (Dumbledore’s bequeath to Hermione Granger) and The Life and Lies of Albus Dumbledore by Rita Skeeter, which Hermione swipes from a dead old lady. Together, Dumbledore’s biography plus the collection of children’s stories shine a light on the Deathly Hallows. Unexpectedly, Harry’s bibliophile bestie is as thievish as Mundungus Fletcher when it comes to printed matter: she also nicks dead-Dumbledore’s library from the headmaster’s office.

WHEN IN DOUBT, GO TO THE LIBRARY

Harry discovers merveilleuse bibliothèque Flourish & Blotts during Book One’s preview of forthcoming attractions, aka the introduction of Diagon Alley. Young Potter spends his August immersed in the acquired hardbacks, vicariously experiencing magic as he counts down to his Hogwarts debut. On his reading list that year:

The Monster Book of Monsters, The Invisible Book of Invisibility, Gadding with Ghouls, Spellman’s Syllabary: the author exploits book titles for maximum humour (and not a little alliteration). Hogwarts: A History becomes a running joke, as Hermione whips it out on reflex to help the Trio solve mysteries about the castle. This folio does not feature on the school syllabus and truly is Hermione’s idea of some light reading. In Book Two, Hogwarts: A History is yanked from Hogwarts’ library, to prevent any incidental education on the Chamber of Secrets; when the Trio hit the road in ‘Deathly Hallows’, Hermione takes no chances and packs it in her little beaded bag.

Harry’s other top mate, Ronald Bilius Weasley, warns Harry in ‘Chamber of Secrets’ about the risks of random reading: “Some of the books the Ministry’s confiscated – Dad’s told me – there was one that burned your eyes out. And everyone who read Sonnets of a Sorcerer spoke in limericks for the rest of their lives. And some old witch in Bath had a book that you could never stop reading! You just had to wander around with your nose in it, trying to do everything one-handed.”

Gilderoy Lockhart’s relatively benign collected works dominate the reading list in Harry’s second year. Despite the celebrity sorcerer’s exposure as a feckin fraud, the besotted Molly Weasley is STILL referring to Gilderoy Lockhart’s Guide to Household Pests in ‘Order of the Phoenix’ when the gang tidy 12 Grimmauld Place. The five-time winner of Witch Weekly’s Most Charming Smile Award, who we re-encounter at St Mungo’s Hospital, would be delighted… if only he could remember his own name.

Advanced Potion-Making is not a very good book. Hermione’s reliance on the gospel of the printed word is challenged in Horace Slughorn’s Book Six Potions classes. Hermione was ace at Potions the previous five years. Unlike Slughorn, Professor Snape did not employ any textbook during his Harry-era tenure as Potions Master. Severus writes instructions on the board. Only as a Defence Against the Dark Arts teacher  – “Turn to page Three Hundred and Ninety-Four” – does Snape use a book in the classroom. Wherein Hermione, the bookworm, deduces that Lupin, the shabby professor, is a werewolf.

Severus’s sitting room at Spinner’s End, depicted in ‘Half-Blood Prince’, is lined with bookshelves. Does seasoned kleptomaniac Hermione Granger pay a visit after the Battle of Hogwarts? Her sticky fingers are surely the reason Harry sleeps with Advanced Potion-Making during his infatuation.

Books reveal character. Prefects Who Gained Power, which Percy Weasley reads in ‘Chamber of Secrets’, affords us a glimpse of his Slytherin-ish ambition. Tellingly, Harry regards this tome as “deeply boring”. Unlike Percy and the young Albus Dumbledore, Harry does not crave power. But Book One’s Quidditch Through The Ages by Kennilworth Whisp bears witness to his passion for competitive sport. And we see where Hagrid’s head is at via Dragon Breeding for Pleasure and Profit. Dudley’s spare bedroom at Four Privet Drive, which Harry occupies earlier in ‘Philosopher’s Stone’, contains numerous discarded books, yet another signal young Dursley is not P.L.U. [people like us].

In ‘Prisoner of Azkaban’, Hermione proves, if proof were needed, that she is a true friend when she gifts Harry not a beloved book but a Broomstick Servicing Kit. And in ‘Order of the Phoenix’ Sirius tries to be a respectable godfather when he and Remus Lupin give Harry Practical Defensive Magic and its Use Against the Dark Arts. In ‘Deathly Hallows’, Twelve Fail-Safe Ways to Charm Witches reaffirms Ron’s feelings for Miss Granger.

The slyest character reveal comes in ‘Goblet of Fire’. Barty Crouch Jr, a Death Eater widely assumed to be dead, disguises himself as Alastor ‘Mad-Eye’ Moody, ex-Auror and DADA Professor. FakeMoody presents Neville Longbottom with a copy of Magical Meditteranean Water Plants and their Properties to ultimately advance Harry through the lake-based trial of the Triwizard Tournament, and further Voldemort’s plan. Barty Crouch Jr fools a great many great people in Book Four. But Neville resists the manipulation. He does not pass along the information about Gillyweed. He does not play along with his parents’ torturer. Neville Longbottom is pure of heart.

You are reading an article from The Rowling Library Magazine Issue 56 (August 2021).
Download the magazine to read all the articles, and if you like it, you can support us to help us create more content like this.

« Jim Kay shares preview of illustrated edition of Order of the Phoenix
Wizarding Clothing: Beneath the Robes »