The “Warner Bros. Studio Tour Tokyo – The Making of Harry Potter” will open its doors in Toshimaen in 2023 and a brand new website and trailer were launched this month to promote this attraction. The website publicizes the Studio Tour as the second one of its kind after London and it will give guests the chance to ”step into the fascinating behind the scenes world of the Harry Potter films.” The attraction will be set on a 300.000ft area, where the former Toshimaen Amusement Park used to be.

The two-minute trailer is actually from the London Tour and it showcases the experience visitors will have while touring the authentic sets, seeing original props and costumes from the movies, and stepping to the backlot to the external sets. While the trailer is quite informative and gives a glimpse of what the experience in Tokyo could be like, it makes a great emphasis on the authenticity of everything you’ll see there. So there is something that doesn’t quite add up here: how can you have a studio tour in Japan, a place where the movies weren’t shot, and where the sets won’t be the originals? 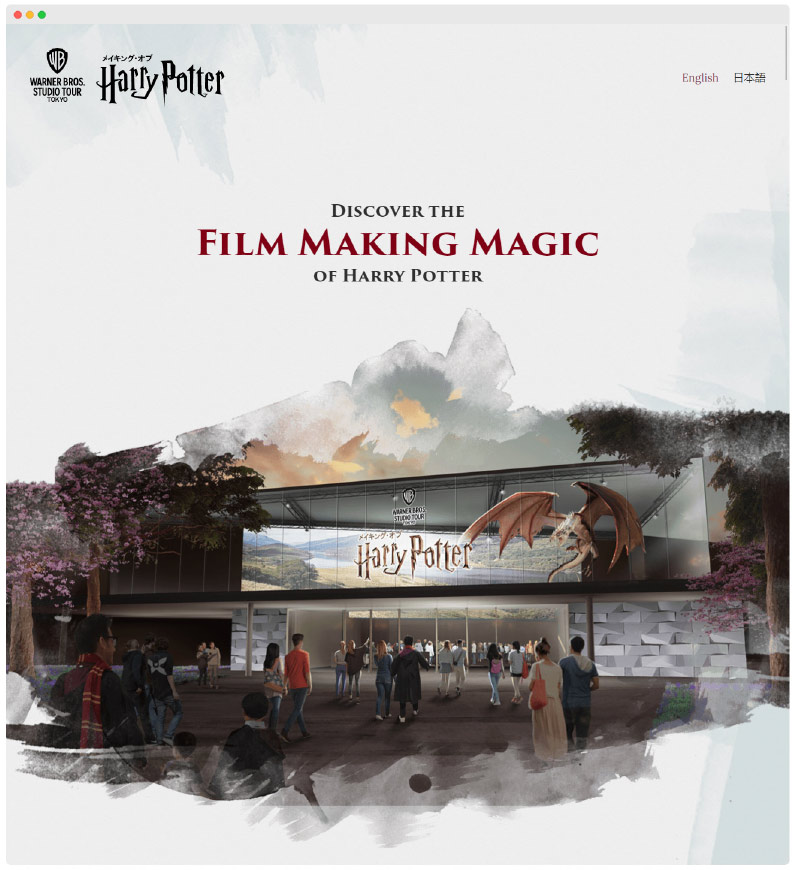 Sarah Roots, Executive Vice President of Warner Bros. Studio Tour, gave an interview to Attractions Magazine in which she explains and justifies the company’s reason for going to Japan: “The intense Harry Potter fandom of Japan and the location of Tokyo with such a high population of people who love to engage with IP and have days out made it a really strong place for us to go.”
According to Roots, the new Studio Tour in Japan “will feature authentic recreations of films sets from the Harry Potter films, including the Great Hall inside Hogwarts, the Forbidden Forest and Diagon Alley,” but since these will be replicas, they will have “more freedom when designing the attraction.” Given they won’t be working with the original props and sets from the films and the whole process will be a recreation, the teams building the new studio tour are allowed to make changes to the size of the sets or the materials used in order to build enhanced and bigger areas, such as the Forbidden Forest. “We’ll be replicating the sets with the original filmmakers – we’ll use the same authentic processes for Japan, but the materials might be slightly different. The fact that the sets at the London Studio Tour are original is fantastic, but they’re very delicate because they were made for filming not for a visitor attraction. There’s an opportunity to make them more durable, which would allow visitors to have better access to them,” says Roots.

Another difference with London is that the Tokyo tour will include photo ops: “The Japanese love photo ops, interactives and getting involved, and we’ll be adding a lot of interactivity and engagement into that tour,” explains Roots and adds: “We’ll take the essence of the Studio Tour London and build on it using lessons we’ve learned to create something even more amazing in Japan.”

So the idea of opening a second Harry Potter Studio Tour with these new and improved conditions is not entirely out of place and it’s not necessarily bad because it will give many people on the other side of the world the chance to somehow experience the filmmaking process, live the “magic” of walking around Harry Potter sets and observing props. And obviously, it will be very profitable business-wise, given what Roots has stated about Japan being “the place to go.” But we can’t help but wonder: will it truly be a studio tour experience if the sets are replicas or if the Forbidden Forest is bigger than the one it was actually used for the films?

I believe the whole point of the Studio Tour in London was to set foot inside the real Wizarding World without the need for a ride or rollercoaster to make your day exciting (and I’m not belittling the parks – I’m a huge fan and I love what they’ve created there!). The same as with the theme parks, the Studio Tour in Japan will have that mark that it was made specifically for visitors, as opposed to the Studio Tour in London where almost everything you encounter stems from the actual filmmaking process, almost everything you come across was made for the movies. We don’t doubt that the recreation will be accurate and you probably won’t notice if it’s the original or not, but in the end, you’ll know that what you’re seeing is not the real thing.

You are reading an article from The Rowling Library Magazine Issue 52 (April 2021).
Download the magazine to read all the articles, and if you like it, you can support us to help us create more content like this.

« Fantastic Beasts 3 Title: Will it be related to a Phoenix or to Albus Dumbledore?
The Original Prop Designer – Exclusive interview with Ruth Winick »