Published as a hardcover illustrated book, The Ickabog is J.K. Rowling’s latest work of fiction. Fourteen years after the final Harry Potter novel, Rowling returned to where she was most successful: writing for children. Although it was originally published online and for free, the printed version of The Ickabog did very well on sales, and at the time of writing this article, it was on the top list for Children’s Middle Grade Hardcover bestseller list of The New York Times for twelve weeks.

It is also the only work of fiction by J.K. Rowling which has not been adapted for the screen yet. Together with the celebrated Harry Potter films, all her other novels were shot for the small screen. The Casual Vacancy was adapted by BBC One three years after its publication, and the Cormoran Strike series was also on TV, one season for each of Robert Galbraith’s books: the first one in 2017, four years after the book publication, and Lethal White just last year. Troubled Blood, the last published book, will probably be adapted soon.

The obvious question is if The Ickabog is going to be featured on the big screen, following Harry Potter’s path. And very often, people would ask J.K. Rowling about this while she was active on Twitter, but she never replied. It was expected that she would ignore the topic, since if there were any possible negotiation going on, a public comment by Rowling could have affected it.

However, the British edition of the Good Housekeeping magazine was lucky enough to interview Rowling for their January issue. The main theme of the interview is The Ickabog, its publication and how children around the world collaborated sending illustrations and more, but there is one question that stands out:

Can we look forward to a film adaptation of this book, do you think?

It’s too early to say, but it would be interesting to see how it could be adapted for the screen.

It is the first time – and so far, only time – that Rowling addressed the topic. It is interesting to see that this answer was not on Twitter, where she often replied without any filter, but on an interview that was approved by her PR team, which means this was thought and considered for publication. 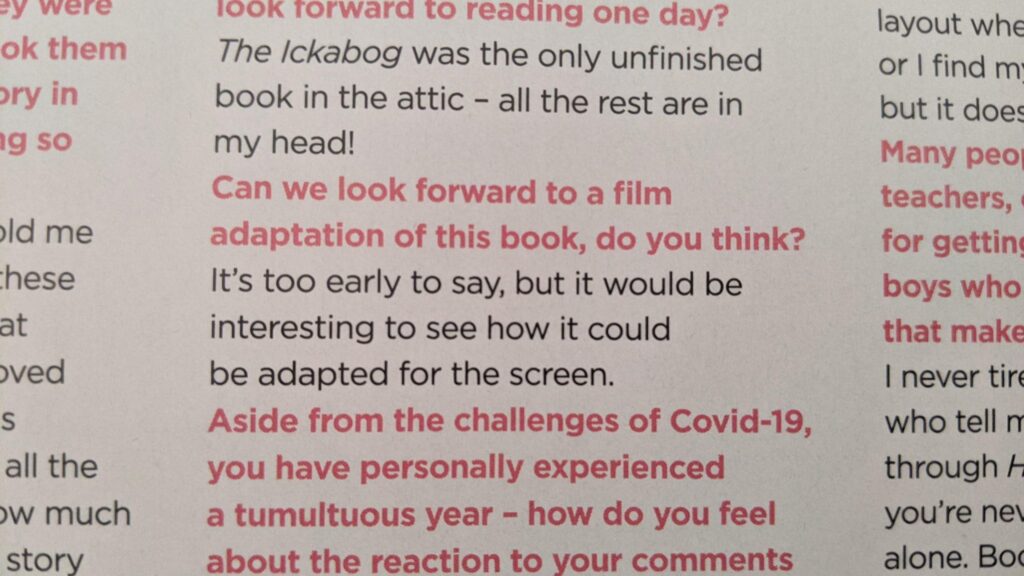 Can we really get from this that there is going to be a film adaptation of The Ickabog? Not yet, but at least we know that Rowling and her team are considering it, probably open to proposal. It is worth pointing out that she also says “it would be interesting to see how”.

The Ickabog is a fairy tale for children, so a live-action adaptation for the BBC does not seem to be the best place for it. An animated series, however, would better fit the narrative, and it would attract young children, who are the main audience for this. It could be, then, the first time we see a Rowling text adapted in this format, and it would be really interesting.

The tale could be associated to The Tales of the Three Brothers, which we already see in animated format as a segment in Harry Potter and the Deathly Hallows: Part I. It is one of the most favourite moments for the fans, who still remember the animations, the voiceover and the different visual effects that helped narrate the story. Something similar for The Ickabog would work as well, and if the animation is mature enough, it would definitely attract the adult audience too.

You are reading an article from The Rowling Library Magazine Issue 50 (February 2021).
Download the magazine to read all the articles, and if you like it, you can support us to help us create more content like this.

« Harry Potter for Grown Ups
Our GrangerVision? Everything we know about the rumored Harry Potter TV series »