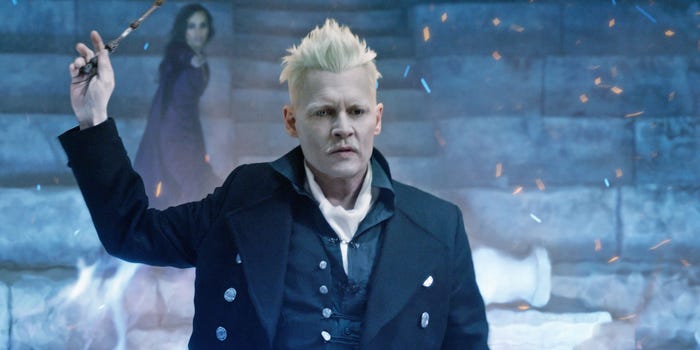 Johnny Depp leaving the Fantastic Beasts series was one of the main topics of 2020 for the fans of the Wizarding World. Danish actor Mads Mikkelsen, famous for his role in the TV series “Hannibal”, was quickly appointed to replace the American actor and to play the role of Gellert Grindelwald, the Dark Wizard who will face Albus Dumbledore in the next movies (although they will not see each other until the last one). Of course, it would be possible to talk for hours about the reasons that made Depp leave the franchise, if it is fair and if Mikkelsen is the best replacement out there. But this is not the place – after all, we care about the story, and we would like to believe that the story is independent of the actors who are working on the set.

With Depp’s departure, Warner Bros. – and more specifically, David Yates, J.K. Rowling and Steve Kloves – will have to make a decision. Will the different physical look of Grindelwald be explained within the story? As we already know, it is not mandatory. In the original Harry Potter films, Albus Dumbledore was portrayed by two different actors and the screenplay never mentioned the change. But in that case it made sense to ignore the switch, since it was an adaptation from the books where the character remained the same. However, in the Fantastic Beasts series, Grindelwald’s appearance played an important role in the first installment.

So in the still-untitled-third-film of Newt Scamander’s adventures, the producers could choose to ignore the new aspect of the Dark Wizard, but it would be interesting to see how they do it if they decided to go for the alternative. Changing actors could be something even positive if they do it smartly – something that they could have accomplished even without being forced by the circumstances.

In Fantastic Beasts and Where to Find Them, Colin Farrell plays Gellert Grindelwald for most of the film. Yes, it is true that Farell played Grindelwald as the auror Percival Graves, but it was Grindelwald with a different look after all. According to David Heyman, producer of the Harry Potter and Fantastic Beasts films, the Dark Wizard used the same magic employed by Barty Crouch Jr: Polyjuice Potion. In the second film, Fantastic Beasts: The Crimes of Grindelwald, we see the true form portrayed by Johnny Depp. This true form was also displayed in a final scene of the first film, but only for a few seconds.

Wouldn’t it be interesting, then, to develop the idea that Grindelwald is a shapeshifter and that he changes its appearance in every film? It would not only help with the plot, but it will introduce a new feature and a new rare characteristic to an already unique character such as Grindelwald. As an outlaw, changing his appearance would explain why it is so difficult for the Minister of Magic to catch him. It would also go together with the fact that he keeps travelling around the world and visiting a wide variety of countries: different physical aspects also help him to blend with different cultures.

His changing look would also affect the confusing relationship he has (or had) with Albus Dumbledore. It could be a tactic developed by the own Grindelwald to surprise Dumbledore when they meet: how would the Great British wizard react if he met a Grindelwald he cannot recognize? Or even worse, perhaps the incapacity to keep the same face over time could be a consequence of the blood pact that he made with his friend when he was just a teen.If that’s the case, the physical changes would not be self-inflicted, and that would not fit with the role played by Colin Farrell in the first film.

Outside the plot, this idea of changing actors also helps the producers: they do not need to sign long-term contracts, and if the new actor is not well-received, the production team will have the chance to pick someone else for the next installment.

There are almost zero chances that the producers and screenwriters follow a Doctor Who – not only because it doesn’t make much sense, but also because it means looking for new actors every two or three years, a task already complicated. Still, it would be a nice and fun addition to the Wizarding World lore, which has not been used in another cinema franchise so far, at least not on purpose for the sake of plot development. The Wizarding World was the first one to split the final movie into two parts with Deathly Hallows more than ten years ago, and it would be the first one to do something like this as well.

You are reading an article from The Rowling Library Magazine Issue 49 (January 2021).
Download the magazine to read all the articles, and if you like it, you can support us to help us create more content like this.

« Goodbye 2020 – A year in review
Tom Ascheim to oversee Harry Potter Franchise at Warner Bros: What does it mean? »