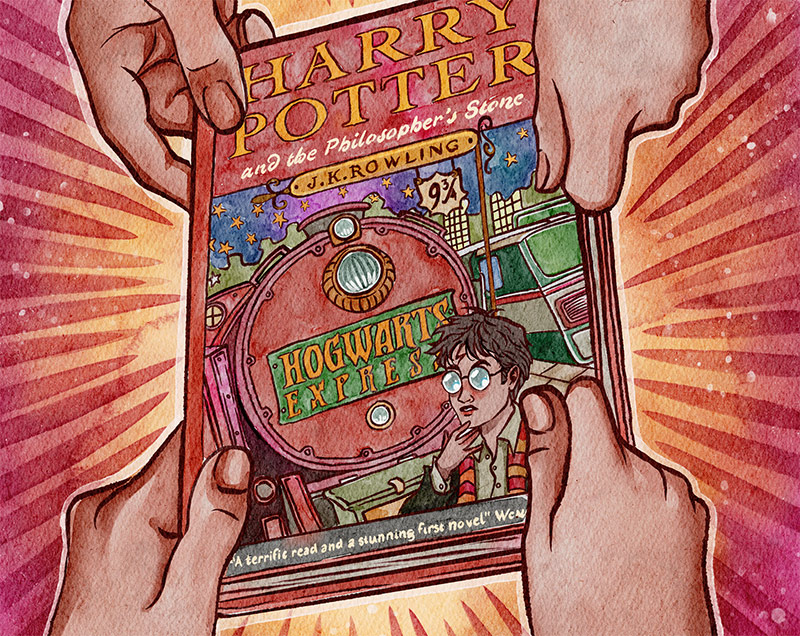 With many Harry Potter book collectors being active all over the world (Instagram accounts are popping up every week), rare copies of Harry Potter and the Philosopher’s Stone get auctioned nearly every month: first prints, signed copies or other noticeable ones. However, a very special edition of the first book in the Harry Potter series caught the media’s attention a few weeks ago.

It wasn’t the first time one of the 500 ‘first edition first print’ hardback copies of Harry Potter and the Philosopher’s Stone was being auctioned. It wasn’t even signed by J.K. Rowling like some previously auctioned copies were. At the time the auction took place, no one even knew the book was going to catch such attention. Until the Portsmouth’s school library service heard of it.

Here’s what happened: the book, sold by Heritage Auction on behalf of a Californian book collector, featured a stamp on one of the first pages, from the Portsmouth City Council Library Service, with a ‘8-97’ (August 1997) pen marking. That’s not so surprising, as many of the early copies of Harry Potter and the Philosopher’s Stone were sold to libraries.

According to the Portsmouth’s school library service, the original owner of the book, this copy was one of three that were purchased back in 1997. The two other ones were auctioned off in 2004 to raise funds for the library service. The third one however, disappeared sometime between 1997 and 2004. As the book wasn’t checked out at the time it was reported missing, it’s fair to say the book was stolen by someone (reader or member of staff) who had probably sensed the early printings were getting more and more valuable.

No one knows how many households this copy of Harry Potter and the Philosopher’s Stone visited until it was auctioned last month.

Now the question is: should (and also ‘could’) the Portsmouth City Council Library Service, the original owner of the book from whom it was supposedly stolen, reclaim the copy or the $55.000 it sold for? If you think about it, the book was clearly theirs and it was stolen them from and sold at an auction. If we were talking about the Mona Lisa being stolen from the Louvre Museum and auctioned off the week after, I think we would all agree the museum should get the painting back and the person auctioning it should get charged, or at least investigated. Also if I was the person owning something and it got stolen away from me to be auctioned off, I would find it fair that I get the item back and that the thief gets investigated.

Also, we are in 2020 and the book was already missing in 2004. Yet it seems the library didn’t pursue any kind of legal action at all. Who knows how many people have possessed this copy in the last 16 years or so? If the Portsmouth City Council Library Service didn’t investigate the book’s theft years ago when they noticed it was stolen, is it still acceptable for them to request that the book be returned to them so many years later?

If the book had disappeared in 1997 or 1998, before Harry Potter became the worldwide phenomenon it is now, then clearly the librarians couldn’t have guessed how valuable this Harry Potter and the Philosopher’s Stone copy was going to become. Therefore, it would have made sense that the disappearance of what was ‘just another children’s books’ wouldn’t have been investigated by Portsmouth’s City Council Library Service. Many books get lost and never get returned to libraries. This happens even more when it comes to children’s books.

However, they still didn’t investigate the book’s disappearance back in 2004 when they auctioned off the two other copies that were identified as being valuable.

Obviously it’s no surprise at all that when realizing the stolen book with their stamp on the first page could sell for $55.000 at an auction, they would consider requesting the book to be returned to them, either to sell it themselves and collect the money or possibly exhibit it. I think they would have been wrong not to try it.

Now do I think the person who sold the book at the auction should be charged or even investigated for auctioning a stolen item? Unless they lived in Portsmouth between 1997 and 2004, my answer would be no. Chances are the book has travelled to several households and the person who sold it last month is not the person who initially got it. The Harry Potter book market on eBay is thriving, and many book collectors use it and similar websites to grow their collections. Can someone be held accountable for not checking the complete history of a book they buy on eBay, including all of its former owners? I would say no, as it sounds completely unrealistic.

I checked with Adam, an important collector of Harry Potter books. “The quandary of what to do when offered a rare book which contains a library stamps isn’t a new one for the second hand book trade”, he said. “Typically after a book has survived several years in the  public library system the library will then sell it to make room for newly published books coming in. In the normal process the library will apply a deaccession stamp to the book to indicate it has officially been removed from the system”, and he adds “The vast majority of library copies of Philosopher’s Stone were deaccessioned years ago when they weren’t particularly valuable books. Now, years later, these books have increased in value significantly and a library isn’t going to be inclined to agree they have sold the book without having a very clear record of going so.” When asked what a collector should do if they’re looking to purchase a library copy of Philosopher’s Stone and it doesn’t contain a deaccession stamp, he recommends “the collector contact the library in question prior to purchasing the book and request, via email, whether the book was officially deaccessioned. If they say it was then I would advise printing out the official confirmation from the library and keep it with the book so it doesn’t become an issue again in the future. If the library say it wasn’t removed from the system and they claim ownership of it then it would be prudent, particularly following the claim by Portsmouth School Library, which will undoubtedly illuminate this for other library services, to take a pass on the book.”

One thing is sure: if the Portsmouth School Library service decides to pursue legal action in the upcoming weeks, the outcome might set a precedent in the book collecting community. In fact, if a judge decides that the book was indeed stolen from the library and shall be returned to its first rightful owner, many books might lose a lot of their current value if their owner is unable to track their whole history and list of previous owners. We will sure keep an eye on what happens next regarding this unprecedented event in Harry Potter book auctions.

You are reading an article from The Rowling Library Magazine Issue 47 (November 2020).
Download the magazine to read all the articles, and if you like it, you can support us to help us create more content like this.