Like drinking unicorn blood, Lockdown is but a half life, a cursed life. In chapter two of Chamber of Secrets, Harry is caged at the Dursleys – just like his owl – until bff Ron and the Twins bust him out of the small bedroom at Privet Drive and bring him to the relative liberty of The Burrow. Location matters.

Lockdown is the first line of defence in the wizarding world. Hogwarts locks down, not for the last time, as the Basilisk stalks Muggle-born students and immobilizes a cat and a ghost. Not that Harry gives a Fu… rnunculus Curse [a jinx that causes boils or pimples]. The Chosen One came to school in a flying car and Merlin-be-damned he will follow those spiders.

Book Three introduces a convicted murderer who has Harry in his sights. Sirius Black slashes the portrait of the Fat Lady (being half-starved himself) and, because of him, the pupils are forced to sleep not in their dorm rooms but in the Great Hall. Lockdown! Meanwhile, the school is ring-fenced by the demonic and depressing Dementors. Harry feels the bite of isolation as his friends abandon him to visit Hogsmeade. But, common to many teenagers, Harry doesn’t believe Lockdown applies to him. He’s got friends to see and mischief to manage. And an Invisibility Cloak.

In Goblet of Fire, the now-adored Sirius Black sticks his head through the Gryffindor fireplace to educate Harry. Which will surely be adopted as a Ministry-approved teaching technique if students are forced to home-school. We can imagine Minerva McGonagall’s head erupting from the Weasleys’ smouldering briquettes to instruct Ron and Ginny how to transform a chicken into a Chihuahua.

In Order of the Phoenix, Educational Decree No.23 establishes Dolores Umbridge as Hogwarts’ High Inquisitor. Her directives forbid anything Pottersome, such as saying Voldemort murdered Cedric Diggory. Umbridge calls this a lie, which is technically correct since Wormtail did the Avada Kedavra. While the Ministry stooge doesn’t call Lockdown as such, she forbids student gatherings except for classes and mealtimes. She is anti-social.

Harry, ignited by Hermione, sets up his own defiant after-school club of misfits and rebels and they gather in the Room of Requirement. But Harry kisses the wrong girl under the mistletoe, which is a clear infraction of social distancing rules – and the safe space is busted open by the hateful headmistress. Oh well. The Cho must go on.

In Book Seven the Trio are in Lockdown at Grimmauld Place, having fled the Bill and Fleur wedding. Death really does lurk outside the door. Well, Death Eaters.

Death Eaters fret about Muggle infection. Despite munching on mortality, they are fearful of the things Muggles bring and forbid their offspring from associating with so-called Mudbloods. Also, they wear masks.

Lord Voldemort is among a small group of people exempt from wearing a mask. This is because he has no nose.

Wizards are susceptible to every sickness known to mankind but can cure themselves instantly with magic. Please note, however, that Floo Powder is an aid for travel, not a wizard cold cure. What magical folks cannot fix easily are magical maladies: Dragon Pox, Spattergroit, Maledictus, Srofungulus, Vanishing Sickness.

Nobody important suffers from these ailments in the timeline of the Harry Potter books, and our hero is an examplar of good health. Supposedly James Potter’s parents, Harry’s grandparents, died of Dragon Pox (in which the afflicted turn green and sneeze sparks). And Ron is diagnosed as having Spattergroit – wizard chicken pox – by a portrait at St Mungo’s Hospital who mistakes freckles for symptoms. In the final instalment, Deathly Hallows, an inspired Ron fakes being home sick with Spattergroit (and not off gallivanting with his best friend and future wife) by styling up the Burrow’s ghoul in his pyjamas. Some people are more at risk. Since Book Four, Ron has been Wheezy. At least, that’s what Dobby calls him.

Sirius sucks at Lockdown. He moans about being bored. He criticizes his 15-year-old godson. He sneaks out disguised as a dog.

Remus Lupin moves in. Not that there’s anything wrong with that. Sirius, starved of company in the wiz priz Azkaban, needs people. He seriously brightens up when the Weasleys come for Christmas. Pity that Arthur had to be chewed up by a big snake for Mister Black to get his Xmas wish.

Sirius locks down in Book Five because he is wanted by wizard cops for a crime he didn’t commit. Prior to his return to Grimmauld Place he was homeless and dining on rodents, so life markedly improves for the sullen ingrate. Besides, Dumbledore told him to stay (after first making him sit and roll over). At the Noble House of Black even the renogade Hippogriff, Buckbeak, has a room to call his own. Dog, wolf, Hippogriff, elf: the place is a veritable zoo! Hey ho, better in than out. And there are much worse Lockdowns. Luna Lovegood spends half of Book Seven confined to Draco Malfoy’s basement.

Dumbledore is the architect of many a Lockdown. He gets it from his mother, who isolated Albus’s sister Ariana. Having been attacked by Muggle thugs the poor girl was host to an Obscurus, a parasitical magical force derived from suppressed magic. She died after Dumbledore invited notorious bad guy Gellert Grindelwald round for tea. That’s when Albus truly understood: never break quarantine.

Harry learns from Sirius’s mistakes. Be on good terms with the people sharing the house, your life is in their hands. Ron and Hermione are no trouble but Kreacher takes some persuasion to stop sneaking off to visit members of the extended family. In Deathly Hallows, finally, the ornery House-elf is won over by the gift of a locket and transforms the Blacks’ grim old place into a cozy and livable home. Kreacher dedicates himself to the number one ingredient of a good Lockdown – the preparation of food. Molly, hitherto the best cook Harry knows, best not rest on her laurels. The elf makes a mean onion soup, an ambrosial treacle tart and his steak-and-kidney pie is (almost) to-die-for.

At both Grimmauld Place and Shell Cottage, the Trio apply the rule that a good Lockdown must include a fantastic project. (Besides these bolt-holes, the Trio leave every building worse than they find it: the café on Tottenham Court Road, the Ministry, the Bank, the School, Bathilda Bagshot’s, the Lovegoods’ and Malfoy Manor. Track-and-trace nightmare.) Harry, Ron and Hermione’s projects are invariably criminal in nature and involve stealing treasure – Slytherin locket and Hufflepuff cup. But it’s all for the greater good.

Ex-Professor Lupin drops in. Sadly, he has a pre-existing condition and Harry, wisely, chucks him out. It’s for Remus’s own well-being. Households aren’t supposed to mix. And Harry swiftly decides the werewolf is not in their support bubble.

Just as the Trio become comfortable in Lockdown, it’s time to go back to work. Like so many of us, they have a job. Theirs is from Dumbledore. Nice job. Pleasant. Easy. Sort of thing you’d expect an unqualified wizard kid to be able to do without overstretching themselves. Just eight Herculean months of camping, hiding and killing the Dark Lord. Lockdown is tough but it’s a big bad world out there. 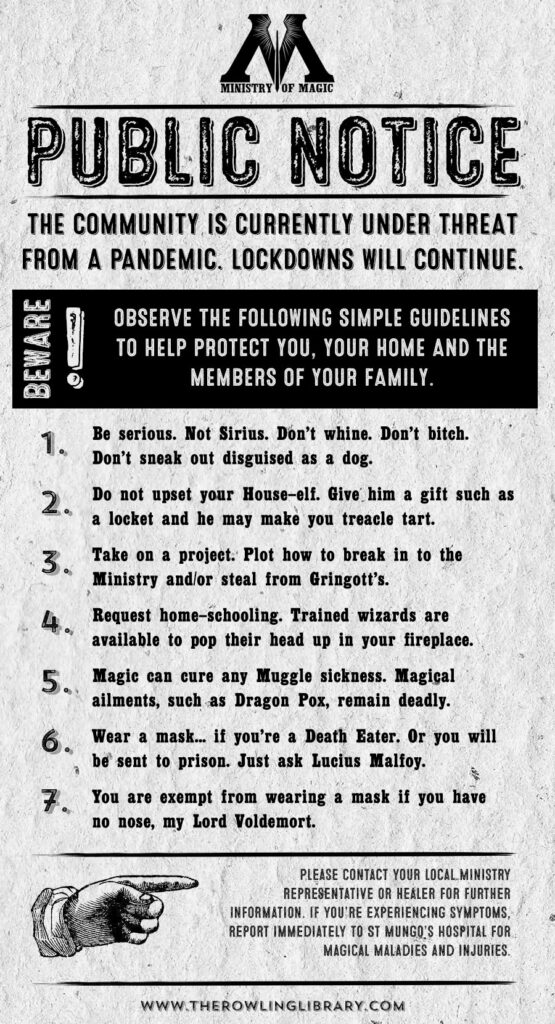 You are reading an article from The Rowling Library Magazine Issue 47 (November 2020).
Download the magazine to read all the articles, and if you like it, you can support us to help us create more content like this.