Actor Rob Knox appeared in Harry Potter and the Half-Blood Prince as Marcus Belby, a Ravenclaw student who joined Harry and others in Professor Slughorn’s famous dinner party. Knox was just getting started with his acting career when he became a victim of a knife attack in 2008 and was murdered.

But his life will still live on thanks to the documentary “(K)nox: The Rob Knox Story”, directed by Aaron Truss, a close friend of Rob who has taken the lead in showing the world his friend’s story. We talked with Truss to learn more about his upcoming documentary and what it means to him. 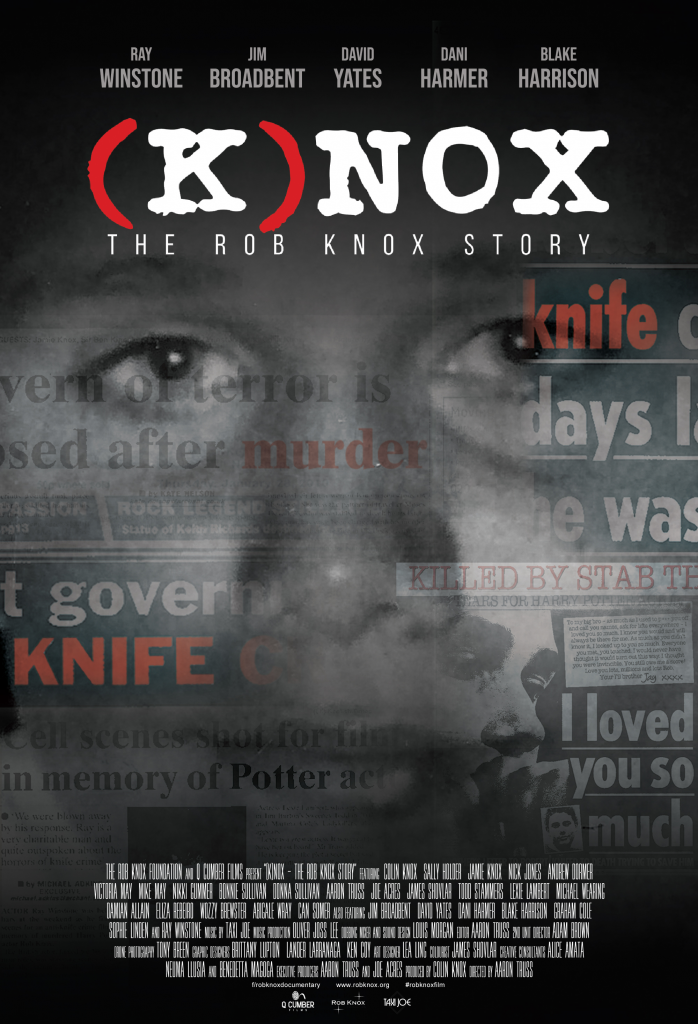 by Aaron Truss (Director of (K)nox: The Rob Knox Story)

Of course, I didn’t know him as Belby – to me he was my close friend Rob. In fact, during his time on The Half Blood Prince, we never actually discussed his big break. To this day, I can’t think why we never discussed what it was like filming a big Warner Bros movie or what Daniel Radcliffe was like in person. It just never came up. And while I wish I could go back and ask him all sorts of questions, what I miss most about Rob, is his friendship.

On 24th May 2008, we woke to the news of another teenager murdered in a knife attack, but it wasn’t until later that day that I learned that the victim was my friend. Now, twelve years later, I find myself helming the most important documentary of my life – Rob’s life story.

While the core of this documentary focuses on the life and death of my friend, we also explore the wider concerns of knife violence in the UK. This isn’t a new topic; knife crime has now cemented itself into British culture whether we choose to accept it or not. When Colin Knox (Rob’s father) approached me to take over this project in 2018, I not only wanted to tell Rob’s story from my own experiences, but I also wanted to mould the film in his personality, his humour and his love for life. The same can be said of his death, I wanted the audience to experience the nightmare his family and friends went through, and still go through to this day.

Rob was a young, cheeky lad with his whole life ahead of him. His ambition to be a successful actor was admired by his friends who supported him every step of the way. He got his first television appearance as a child, through his own ingenuity and without representation. Soon after, while Rob and I would film movies with my parent’s video camera, he started getting roles in real TV and film, eventually leading to his big break in Harry Potter and the Half Blood Prince.

Rob and I would see each other for the last time in 2008, when we were filming for a university project of mine called Employee of the Dead. Our last moments with him were captured accidentally on film as we said goodbye to him, not knowing the events that would soon follow just weeks later.

The opportunity to tell Rob’s story and shine his light on the issue of knife crime was the most daunting task I’ve ever embarked on. On the one hand, I didn’t want to compromise the integrity of the documentary with my own personal feelings, but at the same time, I knew it would be my own experiences of Rob that would eventually shape the movie.

With over 44,000 knife related incidents reported in 2019, it’s hard to believe that these senseless acts are not only cutting down future generations, but also destroying whole communities. Though our documentary is not the first to cover the topic, it is the first to explore the knife crime from the point of view of a family and the victims themselves. I also hope that our film will be the first anti-knife crime film to be shown on television screens around the world, because a topic of this importance needs the biggest possible platform and the largest possible audience.

Since starting out, we’ve been very fortunate to have such amazing support from local communities and members of the film industry. People have not only donated their time on this film for free but feel just as passionately invested in telling Rob’s story. Behind the scenes, film composer Lorne Balfe (Mission: Impossible Fallout, The Lego Batman Movie) provided advice and insight into the execution of the soundtrack with our composers, the band Taxi Joe. Other members of our production team had also taken time out of their busy schedules to help on the documentary from James Shovlar (Colourist on Black Mirror and Peaky Blinders) to director David Yates (Harry Potter and Fantastic Beasts). It’s so hard to wrap my head around this incredible journey that I’ve taken with Rob’s family, close friends and industry professionals, it’s insane! Never in my wildest dreams did I think we would have so much support from the cast of The Half Blood Prince to David Heyman himself.

So, if you’re reading this article, then I thank you from the bottom of my heart on behalf of Rob and his family and friends. The Harry Potter fan community is truly a remarkable one, filled with kind hearts and love for one another, and one that will always have time for Marcus Belby and his pudding.

I truly believe that this documentary is a fitting testament to Rob’s life, to his talent and to his friendship.

What was the hardest moment when you were doing the film?

I think the hardest part for me in terms of making this film, were the interviews with Jamie Knox (Rob’s brother) and Nick Jones (Rob’s friend) who recounted the night of Rob’s death. I’d never known what had really happened that night and to relive it with them was a very harrowing experience. It was painful for them and it made me feel absolutely terrible having to be the one to ask the questions.

You mentioned you wanted to show Rob’s humour and his love for life, but at the same time the nightmare it was for the family. Was it difficult to find the proper balance?

I don’t think it was that hard to find the balance between light and dark in this documentary. Purely because we tell Rob’s story as honestly as we can and the light and dark look after themselves, I think both benefit from each other in a narrative sense because we really show Rob for who he was, so when we lose him in the documentary, it makes the nightmare all the more real for audiences.

Can you tell us more about the research process you have done about knife violence in the UK?

We’ve been blessed with a lot of resources on this film, especially when it came to researching knife violence in the UK. The main research process took almost a year for us on the production team and to be honest, it never stopped. Knife crime is an ongoing culture to this day and our understanding developed as we pushed on, it’s really sad actually as there were days on the shoot where we’d update each other on another stabbing and it just makes you stop and think. We visited a lot of communities that are going through this on a daily basis and you begin to realise that the problem (and solution) isn’t as black and white as some people may think.

Now that the documentary is finished and soon to be released, is that a closure for you? Is there anything else that you’d like to pursue in the future?

I don’t think this documentary has brought myself or Rob’s father (Colin) closure in terms of Rob and his legacy, in fact I think this is just the beginning. Once the documentary is released, it will be our job to keep pushing it and making sure people see it. I think I’ll have closure when our film makes an impact on the people we’re trying to help. In terms of future projects, my team have just finished work on a short horror/comedy film called ‘The Understudy’ which will be released online for Halloween. I think this was something we needed to get out of our system after working for two years on such a serious subject. We’ve also been tapped by a certain someone (whom I can’t mention at this time) to work on a second documentary film after they watched the trailer for (K)nox: The Rob Knox Story, so hopefully we’ll be going into 2021 with a new production.

You are reading an article from The Rowling Library Magazine Issue 46 (October 2020).
Download the magazine to read all the articles, and if you like it, you can support us to help us create more content like this.