Let’s say you are reading the Harry Potter books in a different language. It is possible you are from a non-speaking English country, as most of the Harry Potter fans are (yes, the Harry Potter phenomenon is worldwide), or you are just trying to learn a different language and thought that reading a book you know very well is a good idea (it is, in fact!). Then, in the first page of Harry Potter and the Prisoner of Azkaban in some foreign language editions, you may find a curious fact: it is not Bathilda Bagshot the author of A History of Magic, but a wizard called Adalbert Waffling. Yes, this happens in the first edition of Harry Potter y el Prisionero de Azkaban (Spanish) and Harry Potter et le Prisonnier d’Azkaban (French), among other translations of the third book.

Who is Adalbert Waffling? The first time we heard of him was in Chapter 5 of Harry Potter and the Philosopher’s Stone. When Harry receives his Hogwarts letters with indications for his first year, among the books he has to bring to the magical school, it is listed Magical Theory by Mr. Waffling. Magical Theory is shown, in fact, one line below A History of Magic, who every hardcore fan knows was written by Bathilda Bagshot. So how did this error happen in the third book?

I was reading the book in Spanish when I found out about this. My first theory, after checking that the two books were almost together in Philosopher’s Stone, was that maybe the translator went to the first book to check and, on a quick glance, confused both magical authors. Then I realized that this is not how translators work. They don’t check for canon consistency or continuity, they are only responsible for translation continuity. If they didn’t translate the names of the characters, why would they check consistency in this case?

That’s how I realized this error may come directly from the original source. So I got my first edition of Harry Potter and the Prisoner of Azkaban (published by Bloomsbury in the United Kingdom in 1999) and I opened it. The first page was there, with the error that most of the translations around the world copied. 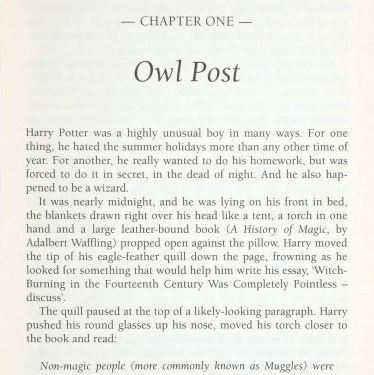 “…and a large leather-bound book (A History of Magic, by Adalbert Waffling) propped open against the pillow.”

This error was fixed later in the British edition, the American edition, and all the editions around the world. But a simple mistake in the original book wide spreaded around the world like an infection. Of course, it isn’t an important one in canon terms, mainly because it was fixed and cleared up later, but an interesting one.

However, it is not the only canon contradiction of Adalbert Waffling. The last book of the series says Dumbledore was in regular correspondence with him (also with Bathilda Bagshot, of course) while he was a teenager. However, Adalbert Waffling’s Chocolate Card Frog, which is canon because it was written by Rowling, says he was born in 1899, after Dumbledore graduated school. This, of course, would be impossible. However, from here, we prefer The Deathly Hallows version, since its canonicity is higher than the Chocolate Frog Cards, so we still believe Dumbledore and Waffling exchanged letters about the Wizarding World.

You are reading an article from The Rowling Library Magazine Issue 38 (February 2020).
Download the magazine to read all the articles, and if you like it, you can support us to help us create more content like this.

« Troubled Blood
The Tales of Beedle the Bard Audiobook Announced »