The illustrated edition of Harry Potter and the Goblet of Fire is finally hitting bookshelves this month. Two years after the release of Prisoner of Azkaban’s own illustrated version, we are finally able to immerse ourselves into Jim Kay’s interpretation of the events in the fourth instalment. 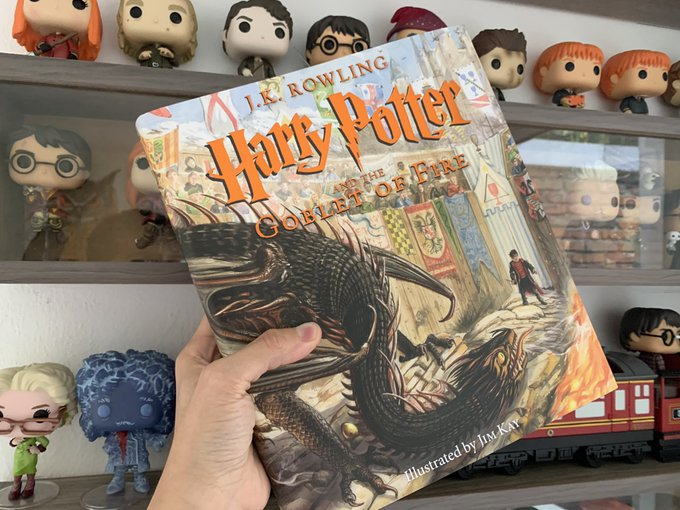 One of the lingering questions the fandom has had since the release of the first illustrated edition has been how big will the books get as the series progresses. With this book we finally know, and the answer is: not that big. At least not as big as you’d expect.

This new edition of Goblet of Fire is only 128 pages longer than Prisoner of Azkaban, despite the original books having a bigger page count difference. From looking at the book, one can notice that this has been achieved by using a slightly smaller font, and reducing the spacing throughout the text.

On the outside, the difference is even less noticeable. The paper used in this new book is much thinner than the one in previous instalments. This makes the size of the book very similar to its predecessor – which is surely a good thing. I personally don’t want the illustrated editions to get so big we can’t even hold them.

When it comes to the actual artwork, Jim Kay delivers another stunning piece of work. I’m sure nobody will be surprised to hear that the illustrations are once again awe inspiring. The Quidditch World Cup, the Triwizard Tournament, and the return of You-Know-Who, come to life through the images on the page – as vividly as you ever experienced them before. And it is surprisingly colorful. Prisoner of Azkaban’s darker tone was evident right from its cover. This fourth entry is not afraid to be dark where it needs to be, but it’s also liberal in its use of the entire color palette – giving a very lively vibe to the events that transpire in the built-up to the ominous finale.

The length of this story does seem to have affected the ratio of images per chapter in this book, though. Bloomsbury or Scholastic haven’t released an official number of how many pictures are included inside, but it does feel like some sections of the book are not as heavily illustrated as we have come to expect. The beginning and the ending of the book seem to be more heavily illustrated, but the middle chapters suffer a bit. There are three chapters in the book without any illustrations (other than the small black-and-white motifs above the chapter title), and there are a few that only have one image.

Among the many great illustrations, a few of my personal favorites include Kay’s first portrait of Ginny, a great black-and-white depiction of Harry and Cedric running through the maze, a beautiful two-page spread of Draco Malfoy in the woods, and a couple shots of the Hogwarts Express travelling through the Scottish Highlands.

The illustrated edition of Goblet of Fire is a worthy addition to the series. Despite the length of the book making it harder to turn this into a fully illustrated experience, no one who has started collecting this new version of the books will want to miss out on this one. Jim Kay continues to deliver, and I continue to be amazed.

You are reading an article from The Rowling Library Magazine Issue 34 (October 2019).
Download the magazine to read all the articles, and if you like it, you can support us to help us create more content like this.