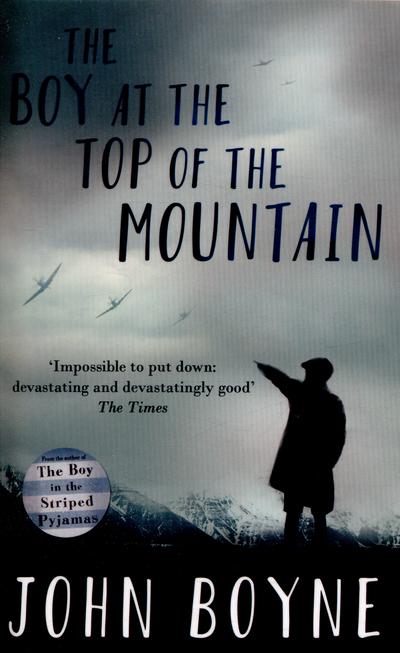 The Boy at the top of the Mountain

This is a very special story, I have to set a disclaimer before I start with my review. The topics that it tells are very sensible and for that reason is important to remember that this is a work of fiction. As any other historical fiction novel, it is based on real facts mixed with fiction. One of the periods of History that I have always found fascinating is the World War II, so when I saw this book I couldn’t stop myself. The book’s author is John Boyne, an Irish writer best known for his historical fiction novels and this one in particular was set in WWII.
There are tales that move you, they make you reflect on life taking you on a journey through time.They will try to solve some questions that maybe you thought before but until that moment you have never had the time to duel on them, those what if’s that we sometimes wonder. John Boyne is an expert trying to solve some of those mysteries, his specialty seems to be the horrifying scenarios of WWII.

So, here is my review of one of the most horrifying and heartbreaking tales that I have ever read.

Well, most of you should have heard about the best-seller The Boy in the Striped Pajamas, if you have not read the book you could also have watched its screen adaptation starring David Thewlis, Vera Farminga, and the rising star Asa Butterfield. Why am I mentioning this story? Because the author is the same one who wrote The Boy at the Top of the Mountain. In the fist one Boyne questions whether the families of the military nazis could have been aware of the horrors who the patriarch or the male in the family used to perpetuate in the Jews and all those innocent who died in the Holocaust, it is all narrated through the eyes of a boy whose curiosity got the best of him and… well maybe it should be the best if you read it.

In The Boy at the Top of the Mountain, Boyne retakes the premise ‘What would have happened if…?’, a question that in this work is even more dark and reflexive than that questioned at the story of Bruno and that has been captivating a lot of readers throughout the world.

This time, the story is also narrated by the point of view of a child, a boy that we are going to see growing through the pages of his story, starting from his most naive and innocent moments to the darkest and heartbreaking ones. The name of our main character is Pierrot, he starts living in France with his parents, his dog and his best friend, a Deaf Jewish boy named Anshel. I have to do a pause here just because Anshel has become a dear character to me. You see, dear reader, I am hard of hearing —or Deaf as there is no other word to use in English to define properly having hipoacusia, as we do in Spanish— and it is very rare, not to say quite impossible, to find characters to whom I could identify myself with, that’s why I loved each interaction between Pierrot and Anshel. Kudos to John Boyne’s cunning and good sense to have the Sign Language included as a way of communication between these two friends —if I am not mistaken he used BSL or ISL instead of LSF, but his usage was correct and very well described, sometimes it even was accompanied by an image as reference. I loved that Anshel was not your typical handicapped character, even a lot more if I take notice of the setting of the story, as it was normal to hide the people with disabilities in basements and to never take their voices as important ones. Case contrary in this story, though. Anshel is a very strong character and the plot twist that he has at the end is a masterpiece —I didn’t see that coming, at all! And that alone deserves a standing ovation to John Boyne.

As I was telling you at the beginning, the premise of the story is a huge ‘What if?’ and this question finds its answer at the first part in Pierrot’s story. His father was a depressed man, a German Soldier who couldn’t overcome his sadness and commited suicide. Then, his mother gets sick from the lungs and as you can imagine he suddenly finds himself orphaned, just at the same time when in France the Nazi ideology starts to get stronger, for this reason Anshel’s mother decides to send Pierrot to an orphanage, where the boy has his very first encounter with the Nazi ideology and it’s here where his aunt —his father’s younger sister— finds him and sends for him, to take him away to live with her in Austria, under the patronage of her boss. And here is where the great ‘What if?’ comes along, raising the following question: ‘What if Hitler would have raised a child?’. John Boyne’s imagines the answer with Pierrot’s story and I have to say that he is a master of creating piercing tales with innocent touch.

Here’s a fun fact: Bruno, one of the main characters of The Boy in the Striped Pajamas has a special appearance in the book. I loved that very brief —but important— cameo as it sets the differences among his story and Pierrot’s. This scene was not forced at all, it was subtle but with a lot of meaning.

As I already told you, my favorite character was Anshel, but there were others too that were very well created, specially the kids that cross paths with Pierrot. What I can truly say about Pierrot himself is that I started liking him, but with the passing of the story he annoyed me to death, he even disappointed me, but that was truly what Boyne wanted me to feel and he did it amazingly. It is for that reason that the quote that marked me from this story —and that summarizes very well the book’s essence— is the next:

«Are the innocent so easily corrupted?»

I highly recommend you to have this book on your libraries at home. I invite you to read it and maybe debate about the story with your family and friends. The intense research that Boyne put in this work is wonderful to just do that. Not for nothing I state that this has been one of the best historical fiction books that I have ever read.

Until the next installment,

You are reading an article from The Rowling Library Magazine Issue 30 (June 2019).
Download the magazine to read all the articles, and if you like it, you can support us to help us create more content like this.

« Is the Wizarding World still in the closet?
20th Anniversary of Harry Potter and the Prisoner of Azkaban »