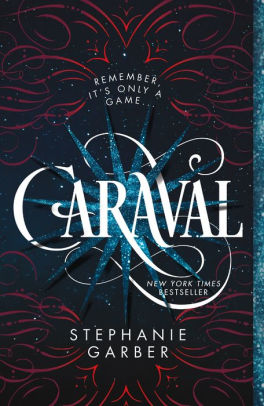 If you like a good mystery, fantasy and romance, this trilogy is for you. Written by Stephanie Garber, the Caraval world is just as magical as the name sounds.

The first book was published on January in 2017, Caraval was the beginning of the quest that was going to take two sisters —Scarlett and Donatella Dragna—  across the Empire of Elantine to play a game that sometimes felt more real than expected. Then came Legendary and finally, this past May 6th, the conclusion of this saga was released.

Here is our review of the very first book of the Dragna Sisters’ Adventure.

Remember, it’s only a game…

Scarlett Dragna has never left the tiny island where she and her sister, Tella, live with their powerful, and cruel, father. Now Scarlett’s father has arranged a marriage for her, and Scarlett thinks her dreams of seeing Caraval—the faraway, once-a-year performance where the audience participates in the show—are over.

But this year, Scarlett’s long-dreamt-of invitation finally arrives. With the help of a mysterious sailor, Tella whisks Scarlett away to the show. Only, as soon as they arrive, Tella is kidnapped by Caraval’s mastermind organizer, Legend. It turns out that this season’s Caraval revolves around Tella, and whoever finds her first is the winner.

Scarlett has been told that everything that happens during Caraval is only an elaborate performance. Nevertheless she becomes enmeshed in a game of love, heartbreak, and magic. And whether Caraval is real or not, Scarlett must find Tella before the five nights of the game are over or a dangerous domino effect of consequences will be set off, and her beloved sister will disappear forever.

Welcome, welcome to Caraval…beware of getting swept too far away.

Stephanie Garber created a fantasy world that could be very similar as our own world, taking mostly rules from the Elizabethan and Victorian Eras, where women had to marry for status and were at the entire mercy of their fathers and later their husbands. Is with this rules that Garber plays a central game set for the Dragna Sisters.

The story is mostly narrated following the steps of the elder one, Miss Scarlett Dragna, a girl that starts as as shy as a mouse and through the pages of her story you can notice the change in her character to become a good heroine.

Caraval’s world is a bit complicated to describe and understand, for instance we are thrown in this very first adventure in this world that seems to be located in a planet with a vast amount of Islands, that in their totality are named the Elantine Empire. In this place there are rumors about people that can perform magic, the most prominent being someone known as Master Legend, the owner and creator of Caraval, a circus-like game where reality mixes with magic and mystery. Scarlett is enchanted since her girlhood with the stories that she has heard about this place and the game, we start the story with letters of this girl trying to reach Legend asking for tickets to at least see a performance of the game.

One of the most marked aspects of Garber’s writing style is the prose that she uses as it seems that in this fantasy world one can see and connect emotions with colors and smells. Garber uses a lot of metaphors to describe some of the feelings that her characters are living in some scenes. In my personal opinion I must say that it’s a bit weird to read some of this metaphors coming and going, but now that I have almost finished reading the second book, I can very well understand better that in this characters world they can not only feel their emotions but they can also connect them to their five senses, making them a bit different than us humans from Planet Earth. So, it’s weird, but a good weird.

The characters are very different and they have very strong personalities, the story of the Dragna Sisters is not complicated, they are both girls raised with a tyrannical father, their mother abandoned them when they were little and that marked both of them in different ways. As I told you Scarlett is a insecure person, while Donatella, or Tella, is the adventurous one. When Scarlett receives the invitation of Legend to get into Caraval, she never expected the adventure that she was about to encounter. Here I have to say that I felt very reflected on the love that she has for her little sister. Tella is the world for Scarlett and she would move mountains to keep her save. Is this love that causes them some trouble, Legend takes Tella hostage and suddenly Caraval is dangerous and the magic seems darker than Scarlett expected. I like to say that Caraval is as if Disney had created a darker and twisted version of Frozen, where Elsa and Anna may have to play a very macabre treasure hunt game to find each other.

Though, I identified myself a lot with Scarlett, there were certain moments that I would have to shake her up to notice certain things in the game that could have been crucial. It’s perhaps for this why I liked the character of Julian the best. This fellow starts like if he were a secondary character only to swept away and find his place as one of the main characters along with the sisters and the mysterious Legend. He has so many layers that I wanted to discover and set free. And also Legend’s character. He is a total mystery, really. And that’s what I liked about him, he can be presented as a genius, as a villain or as a saviour, and that’s what makes the book intriguing.

One of the things that I loved the most from this book is that nothing is like you expected it to be. Yes, there are a lot of clichés —specially in the romance area—, but at the end nothing (really, nothing) is at it seems to be. And that’s what makes Caraval one of the most book that I have enjoyed to read last year.

Garber’s pen created so many good quotes, but the best that I can share with you is:

«Every person has the power to change their fate if they are brave enough to fight for what they desire more than anything.»

So, if you liked the Goblet of Fire and its twisted games, then you will enjoy reading about Caraval. I know that I enjoyed it a lot and I am still enjoying it while reading Legendary. I can assure you that the second one is if not a bit better than the first and I am reading very good reviews about Finale. I cannot wait to have a copy so I can confirm or refute this rumors.

You are reading an article from The Rowling Library Magazine Issue 29 (May 2019).
Download the magazine to read all the articles, and if you like it, you can support us to help us create more content like this.