The unofficial memorial set on the beach of Pembroke in Wales has been vanished.

After the film and crew of Harry Potter and the Deathly Hallows the Freshwater West Beach in Pembroke became a major tourist attraction among the Harry Potter fans, as this was the same location to bring life to one of the saddest scenes of all the Potter’s films and books: Dobby’s Death. 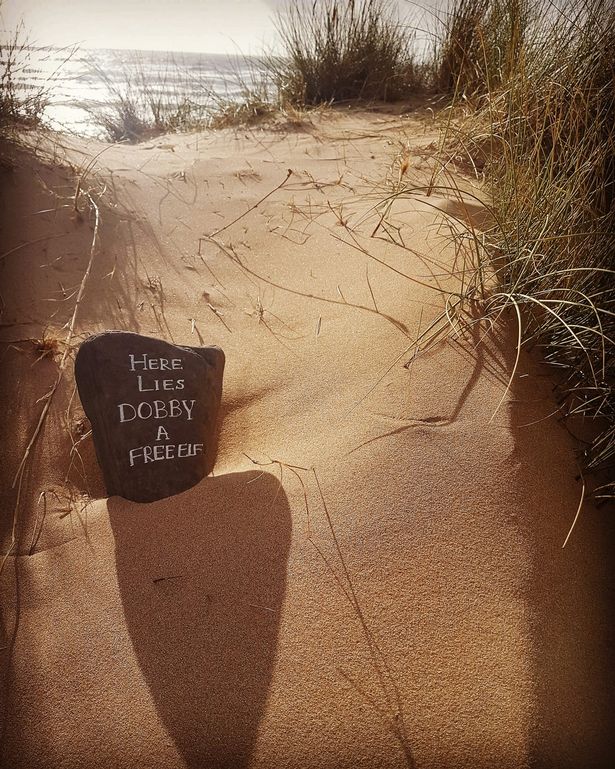 The actual Shell Cottage that the production built was removed after the filming was completed, but the grave that set Elf’s final rest spot remained. Fans around the globe visited Pembroke only with the purpose of giving some respect to their beloved character, until now that the stone was found missing from it’s spot.

Locals report that this is not the first time that this happens, and it seems that before the stone has been moved around the Beach. This time, the taker just left behind a small pile of pebbles.

Dobby made his first appearance in Harry Potter and the Chamber of Secrets, as the House Elf of the Malfoy’s family that tried to made Harry and his friends aware of the dangers that were going to be launched on them that year at Hogwarts. Even when his methods were unorthodox and dangerous, the Elf won the hart of all the Potter readers. His friendship with Harry Potter was set on stone when Harry freed him from continuing working with the Malfoys, by tricking Lucius Malfoy on giving the Elf a sock.

He also made an appearance on Harry Potter and the Goblet of Fire, he was the inspiration behind Hermione Granger’s S.P.E.W. movement involving giving rights to the House Elves. But it was his pivotal moment on Harry Potter and the Deathly Hallows, where the renegade Elf served Harry in more way than one, first aiding in the quest to find Mundungus Fletcher − the thief of the Horrocrux Locket, and then by saving Harry, Ron, Hermione, Griphook, Ollivander and Luna from the Death Eaters and Voldemort himself in a dangerous movement at Malfoy’s Manor.

Dobby ‘the Free Elf’ was one of the most innocent and beloved characters, his death was one of the most suffered among the fanbase. Last year Rowling apologised for killing Dobby through her Twitter account, where she wrote: ‘It’s that anniversary again. This year, I apologise for killing someone who didn’t die during the Battle of Hogwarts, but who laid down his life to save the people who’d win it. I refer, of course, to Dobby the house elf’.

We hope that the tombstone returns soon to its rightful place.

« Illustrated Edition of “Quidditch Through the Ages”
Book Review: Stalking Jack the Ripper, by Kerri Maniscalco »