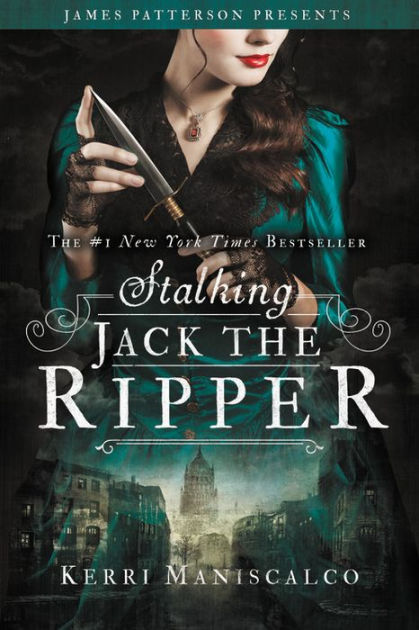 He murdered women in cold blood.
He terrorized an entry city.
He taunted those of us who hunted him down.
But despite all these horrors, in the end I could not deny it…
I was the girl who loved the Ripper.

From the Publishing House that brought Harry Potter to USA, in alliance with Jimmy Patterson books, comes a compelling saga that will be left you on the edge of your seat at every turn of the pages. Kerri Maniscalco’s debut novels are four books detailing the life and adventures of Audrey Rose Wadsworth, a girl that has a passion for forensic sciences in a world that is full of prejudices on studious women and how this passion of hers leads her in the most gruesome and mysterious adventures.

In this review I will only talk about the first book, to not give away major plot twists or spoil the mystery.

The first installment is Stalking Jack the Ripper, this book takes the real-life unsolved case of Jack the Ripper and gives it a twist that is in its simplicity an awesome fictional plot. As many of you dear readers must know, Jack the Ripper was a serial killer that terrorized the streets of Whitechapel, London, in 1888. He murdered women of ill repute and unfortunately he was never catched by the Police, his crimes were so cruel and gruesome that made him a legend, no one really knows the true identity of this killer and the theories about his or her identity are vast and extensive. Kerri Maniscalco did an amazing research on the case and took one of those theories to give life to this adventure.

As we said before, the story follows Audrey Rose Wadsworth a young woman raised to be a Lady at the Victorian High Society, this girl is far from wanting to follow the strictures that her society has on women, her own mother before her death inspired her to continue her progress studying with her Uncle Dr. Jonathan Wadsworth, one of the best forensics in London that works along with the Scotland Yard. Is while studying with her Uncle how she crosses paths with the Ripper’s case, her Uncle was appointed to study the cadavers of the women and help the Scotland Yard to unveil the mystery of who could be the responsible of those horrible crimes.

Audrey Rose is not alone in her adventures, her main company is another student of her Uncle’s class: Thomas Cresswell, a young lad that has the personality of Sherlock Holmes and Mr Darcy combined in one. As you can imagine these two develop a romantic relationship of sorts, even when Audrey Rose loves to deny it. But, this romance is not the center of the plot as seems to be the norm in the Young Adult Literature nowadays, it’s only part of it and it never mixes with the solving-crimes plot, on the contrary it serves as a side effect and even a comic relief or sorts in such dark contexts, because dear readers you must be aware that Maniscalco has a sharp pen as an scalpel, she will not shy away in describing even the most gruesome facts and details of doing an autopsy or finding a brutally stabbed cadaver.

The main characters and those that are secondary are very well developed and one can create a connection with them, even with the villian. This helps to shock you with the plot twist at the end, because it is unexpected. Believe me, Maniscalco has you think that the murder could be someone and at the end is the one that you could have never imagined.

This book has a lot of awesome and feminist quotes, but there are two that, in my opinion, set the tone of the story:

«I dreamed of a day when girls could wear lace and makeup —or no makeup at all and don burlap sacks if they desired— to their chosen profession without it being deemed inappropriate.»

«The constable eyed me with distaste. I buried my hands in my skirts, gripping the material until I was positive I’d rip it off. Oh, how I despised remaining silent under such awful judgment. I’d like to remind each man who held such poor opinions of a woman that their beloved mothers were, in fact, women.

I didn’t see any men running about, birthing the world’s population then going on to make supper and tend to the house. Most of them buckled to their knees when the slightest sniffle attacked them.

There was more strength held underneath my muslin layers and well-perfumed skin than in half the men in London combined. I forced my mind to stay focused on our task, lest my emotions show plainly on my face.»

One of the things that I loved the most is the Facts Section that Maniscalco always adds at the end of each adventure, there she explains in detail the real-life facts involving the cases or the places that she recreates in the fiction. I expect fully great things in the upcoming future from Maniscalco’s hand. Her writing is marvellous and it has the magic to transport you in time, visiting dark alleys and trying to solve mysteries that in our world are yet to be resolved.

So, if you loved the mystery of the Harry Potter books and the crime-solving plots of Cormoran Strike, then you must read this books.

The second one is just as awesome and I dare to say it’s almost like reading a Sherlock meets Potter and Austen, then Prince Dracula, Hunting Prince Dracula is one of the best sequels that I have ever read. Sometimes people tend to say that second instalments or continuations can destroy a good story but this is not the case. HPD in my humble opinion surpasses SJTR.

I am yet to read the third instalment that is Escaping from Houdini, but I daresay that I will love it as much as I am already loving SJTR and HPD. The fourth and final book is named Capturing the Devil and will be released this year in September. On April 1st Kerri Maniscalco announced that soon the cover is going to be revealed. And Barnes and Noble is going to be launching a box set containing the four books.

So, as to finish this new section. Do I recommend to start Stalking Jack the Ripper? Of course! I highly recommend to add this new saga into your library’s shelves. They are really awesome and they can help us pass the time until we return to Hogwarts once more, and if you already read them, do share your opinions with us in our social networks.

Until our next number, Mischef Managed!