Ironically, the idea to recreate parts of the Wizarding World in my own home actually came out of a desire to pare down and simplify the Harry Potter parties I had been hosting annually for friends and family. Since 2013, I had been planning immersive, elaborate parties with decorations that referenced or brought to life different scenes and places from the beloved book series, just for fun. As word got out and invitees brought like-minded friends, I was delighted to find that a growing community of fellow fans and new friends were brought together by my Harry Potter parties. At one party, I took the opportunity to raise money for a local Wisconsin autism charity and more recently, for a charity called ‘Immigrant Families Together’.

However, as numbers grew and the events became larger and more public, I found myself under pressure to match or even outdo the previous year’s event. The intricate decorations and their staging alone occupied an enormous amount of time, in both preparation and execution. It seemed that I was always preparing for the ‘next party’ and even taking a week of vacation time to work full time on party preparation never seemed to be enough.

I enjoyed the creative outlet that the parties provided for me but I soon had an idea for something more ambitious, which would make party preparation less time-consuming in the long run. A friend had suggested that I display my Harry Potter collection year-round instead of just at parties. I thought, what if, instead of displaying my collection in dry display cases or curio cabinets, I could turn my hand to something closer to what was once called a ‘wunderkammer’, or a ‘cabinet of curiosities’? Decorating for future parties would be minimal if I had my own Diagon Alley in my basement, creating something between an event space and a permanent exhibit. In other words, my idea was to create a wondrous space in which my collection could become an immersive experience for guests, akin to magically ‘visiting’ Rowling’s enchanting world.

I was no stranger to turning fantastical ideas into real-world DIY projects. Together with an engineer friend, I had once built a ‘functioning’ pensieve for a party when my family room became Dumbledore’s Office. By suspending a computer monitor beneath a translucent bowl of water, images from my most recent trip to the Wizarding World of Harry Potter were projected onto the liquid itself, making memories visible from above. The Diagon Alley Project would of course be taking magical DIY to a whole new level! I knew what I wanted and got advice on how to bring my vision to life from friends and family who are in engineering and construction. Eventually, I hired a contractor to construct the main structure that I would then finish off and decorate.

The project began with the idea of using Diagon Alley’s shop windows to stage tableaus of their imagined contents, inspired mostly by the Harry Potter books but also the films and the Wizarding World of Harry Potter in Orlando. The ‘shops’ would display my collection of Harry Potter merchandise and self-made ‘props’. The original Diagon Alley project was built along one wall in the basement and included Madam Malkin’s Robes for All Occasions, the Magical Menagerie, Flourish & Blotts, Wiseacre’s Wizarding Equipment, Weasley’s Wizard Wheezes, and Ollivander’s. Each shop is only a few feet deep – just enough to display my collections. The collections are viewed through shop windows, but the shops aren’t meant to be entered by anyone but me, while stocking and arranging things. The walls of the shops were made of 3D brick-look paneling that I painted in colors similar to those used in Diagon Alley as seen in the films and in the Wizarding World in Orlando. Some of the windows were once parts of curio cabinets and the other windows and all the doors were salvaged from old homes. The back wall of each shop is covered in wallpaper or tapestry that is meant to give a feeling of more depth.

It was important to me to include Madam Malkin’s because it was the first shop that Harry entered in the Philosopher’s/Sorcerer’s Stone. My Madam Malkin’s is home to my robes and other Wizarding wearables like hats, sweaters, ties, scarves, jewelry and watches. I chose the Magical Menagerie instead of Eeylops Owl Emporium because I didn’t have space for both and I wanted to display all of my magical creatures. I like to get at least one new creature every time I visit the Wizarding World in Orlando. Most recently, I’ve added some of the Fantastic Beasts creatures – several nifflers, a demiguise and Picket the bowtruckle. I still haven’t found an occamy, but I hope to include one eventually.

Decorating Flourish & Blotts was really fun. There is something so very magical about a magical bookstore. I’ve gotten a lot of Harry Potter-related books as gifts through the years and they are all displayed in Flourish & Blotts. Levitating against the wall is an old book I re-covered and re-titled Levitation. I made another old book into Traveling With Trolls and the picture of Gilderoy Lockhart on the cover is actually a picture of one of my sons in Lockhart cosplay. I found a clear book-shaped sheet of hard plastic that was meant to protect the pages of on open cookbook and I call it the Invisible Book of Invisibility. A glowing book-shaped nightlight was dubbed ‘Illuminating the Future’ and of course I have the Monster Book of Monsters in a cage.

Although I would have liked to have built separate Apothecary, Potages’s Cauldrons, and Quality Quidditch Supplies shops, I just didn’t have the space. Instead, I have a Wiseacre’s Wizarding Equipment shop. It’s not mentioned in the books but there is a Wiseacre’s shop in Universal’s Diagon Alley. That one displays mostly astronomy-related ware but I use mine as a kind of Wizarding department store for everything from potions, to cauldrons to quidditch equipment and herbology supplies. There is also a divination section with crystal balls that were part of my mother’s glass paperweight collection and a tea cup that a friend gave me that has grim-shaped sediment in the bottom. As a nod to Philosphere’s/Sorcerer’s Stone Chapter 5, the apothecary section has some liver on a scale, with a sign saying, ‘Dragon liver, 17 sickles an ounce’.

Fred and George are some of my favorite characters and Weasley’s Wizard Wheezes is so iconic – I couldn’t have Diagon Alley without it. I achieved the look with a rounded curio cabinet, a gaudy sports coat from a thrift store, and a mannequin head. Inside are a rememberall, a time-turner, Fred and George’s love potions, pygmy puffs and various Weasley products. My current Ollivander’s is only about 18 inches deep because there is a laundry room concealed behind it and I just couldn’t spare any more space. I just acquired a dozen new wands, so an expanded Ollivander’s is on my list of future upgrades.

About a year after completing the original Diagon Alley project, I found myself dreaming up large-scale additions for the rest of the basement – including the Leaky Cauldron, Gringotts Bank, a hidden Borgin & Burkes, and a cozy Gryffindor Common Room seating area. The Leaky Cauldron has (faux) wall-mounted Butterbeer, Fire Whiskey and Mead tappers. The barrels were originally planters that I adapted for the purpose. The large black metal witch and cauldron on the side wall was a lucky find that was being sold as a Halloween decoration. The other décor, including the wooden Leaky Cauldron sign and the illuminated liquor bottle shelf were some of my DIY projects. During parties, a friend tends bar and we serve signature Wizarding World-inspired drinks.

I really enjoyed the Gringotts Bank project. I didn’t include it in the original Diagon Alley project because I wasn’t sure how I could give the impression of a multi-story building topped by a fire breathing dragon! I needed something in that corner because I wanted to disguise a laundry chute… Although I had to settle for a 1-story Gringotts, I managed to include a step, the columns, the dome and even a dragon. Although it looks much larger, Gringotts itself is only about a foot deep, with a laundry chute behind it that’s accessible through a concealed door. When the front doors are open, they reveal a (poster of) a goblin with a vintage scale and gold coins on his desk. I was thrilled to find a 4-foot 3D goblin during the after-Halloween sales. He stands outside the bank to welcome people to the bank.

I have a workshop concealed behind Diagon Alley and during parties I transform it into Borgin & Burkes, complete with iconic items like the Hand of Glory and the Cursed Necklace, among an assortment of skulls, and other dark artifacts. The Gryffindor Common Room really came together when, after years of searching, I found the ‘Lady and the Unicorn’ tapestries, which is the same wall covering used in the Harry Potter films. The look was completed with some comfy old furniture that I reupholstered in dark red, a red carpet and Gryffindor lamps. It’s such a cozy room and it makes a great gathering place during parties and or just to hang out. I recently added a very large screen TV, which, although it takes away from the overall look, it’s now the perfect place to watch the Harry Potter films!

During parties, I still decorate other parts of the house. My family room is always Dumbledore’s office, with the functioning pensieve, a life-sized Dumbledore ‘stand-up’, and his desk and chair. My dining room becomes the Divination classroom, where a friend reads guest’s futures. The kitchen serves as the either the Three Broomsticks, or the Great Hall, where a lot of the food is served. My entryway is Honeyduke’s where I put out my homemade chocolate frogs, pepper imps, licorice wands, etc. I recently repainted an old tea cart as a Honeyduke’s Sweets Trolly that I put in the basement and cover with more of the Wizarding sweets.

I’m sure that my Wizarding World strikes a lot of people as excessive, but it brings me a lot of joy and it gives me a comfortable and fun place to hang out, entertain friends and family, and even to raise money for charities. I’ve never regretted the time, effort and expense of creating it. 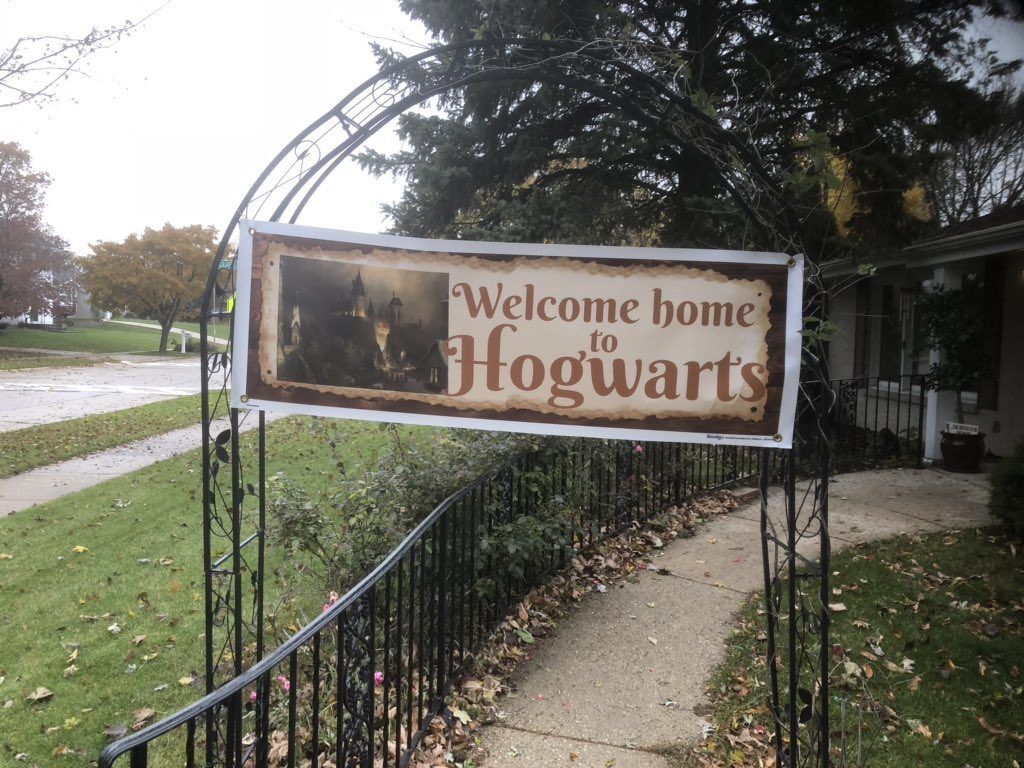 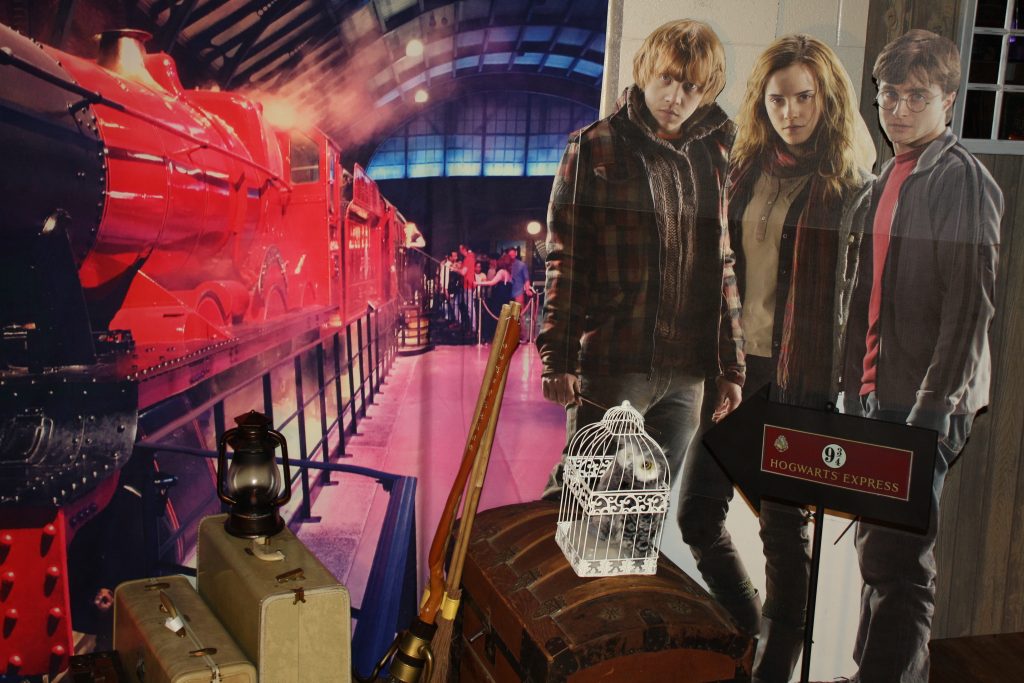 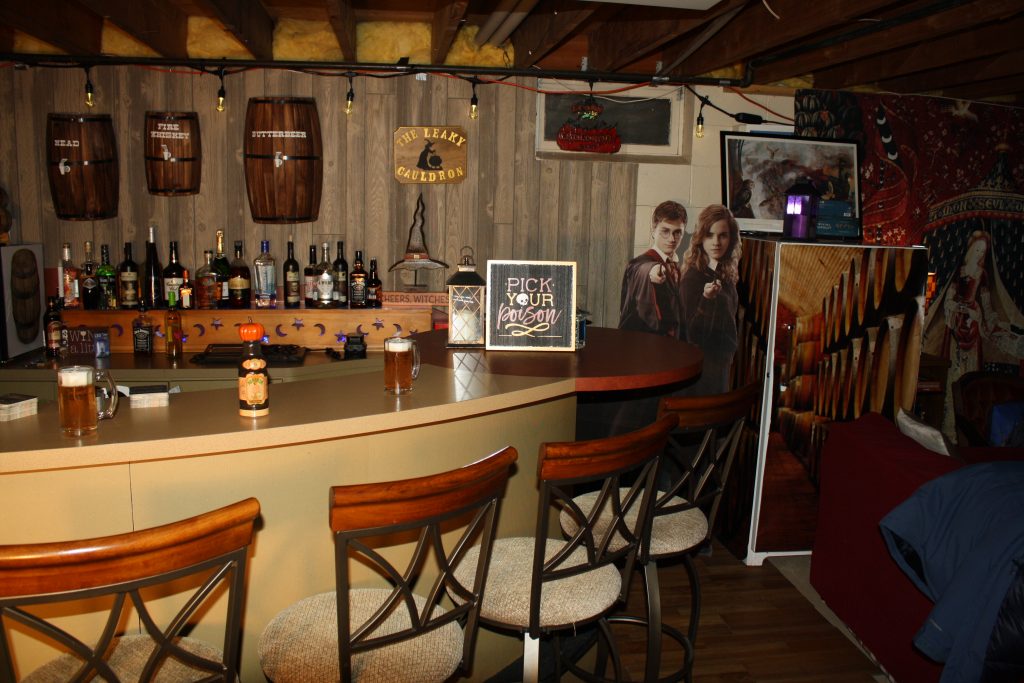 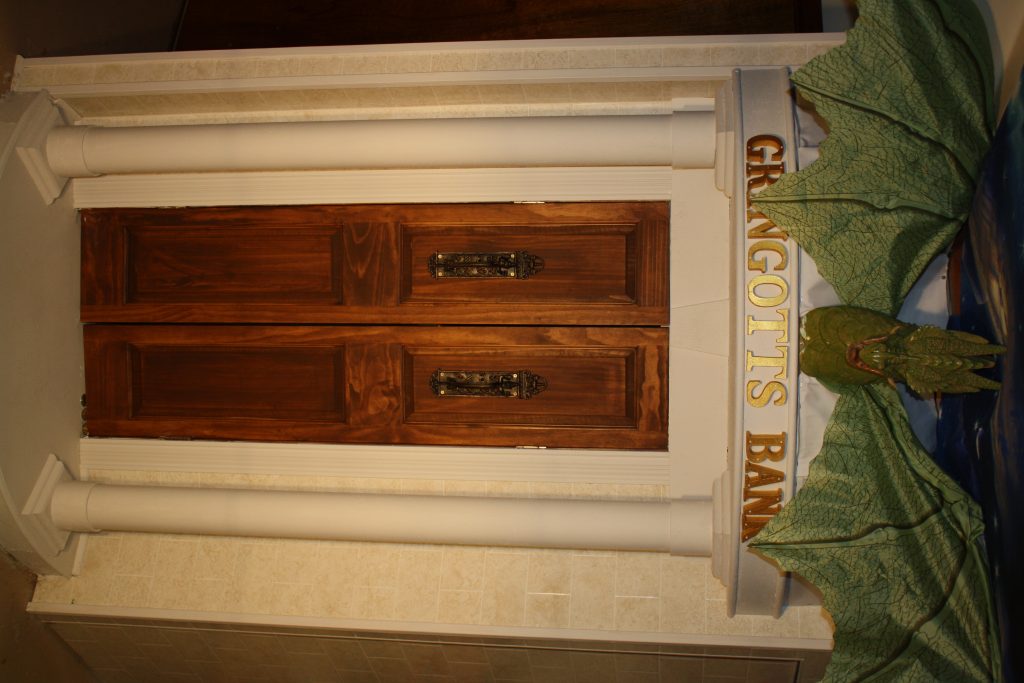 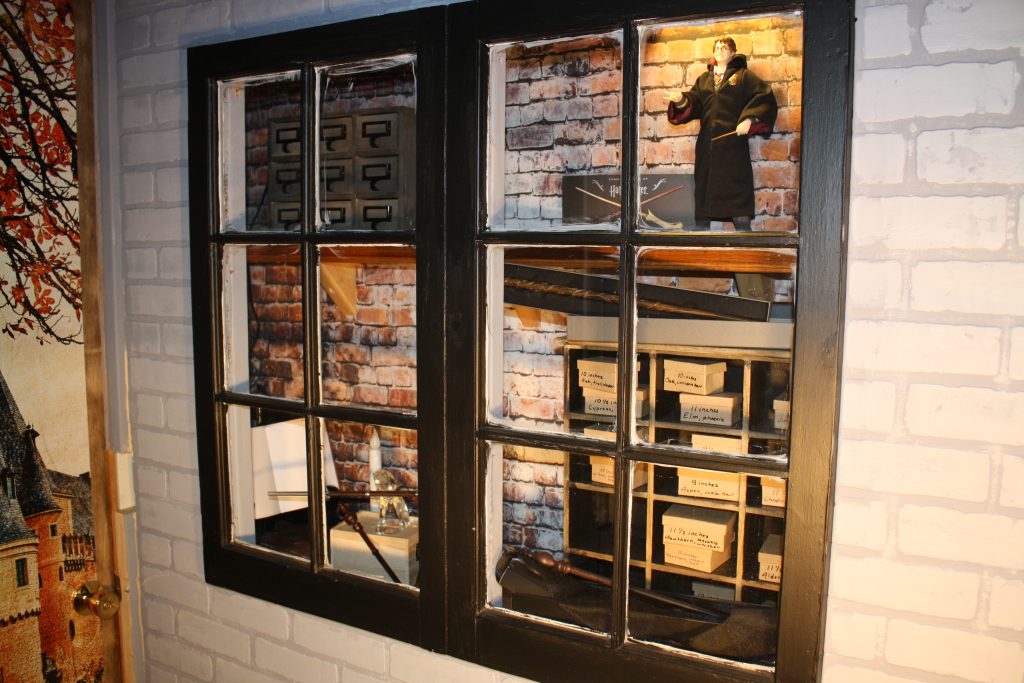 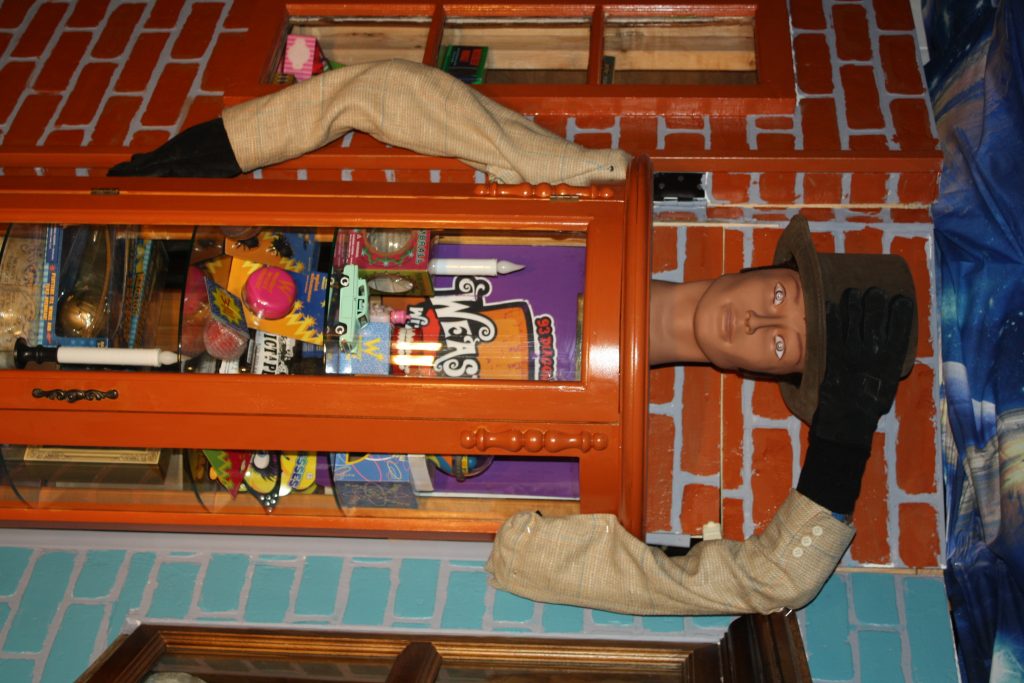 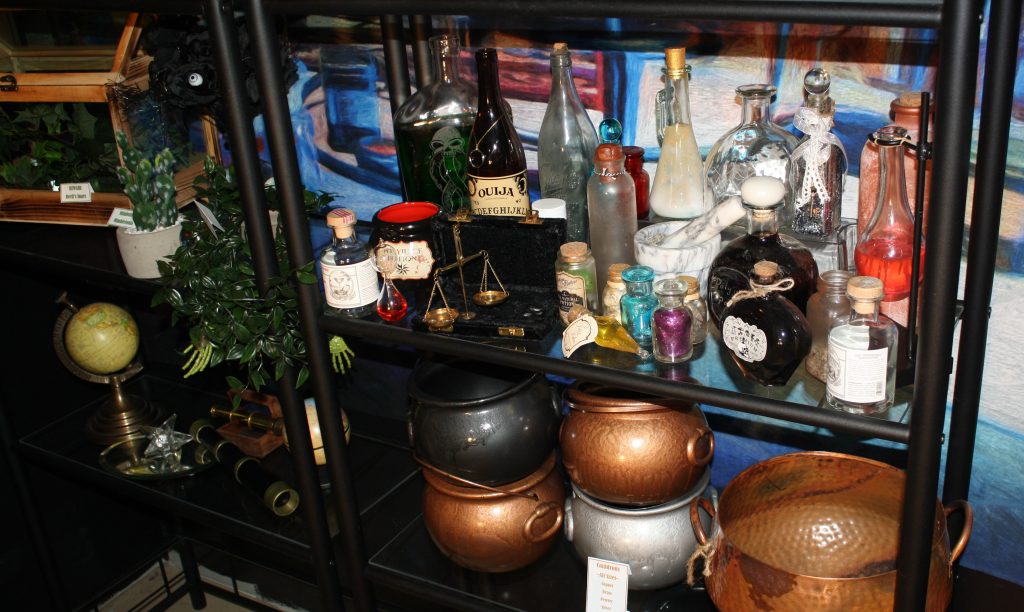 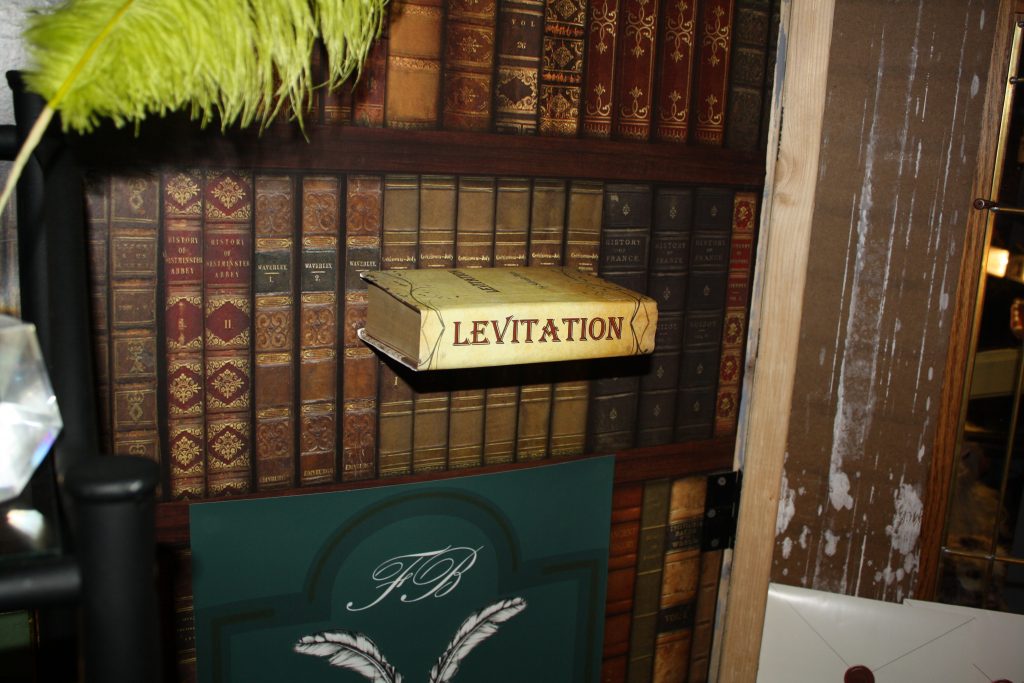 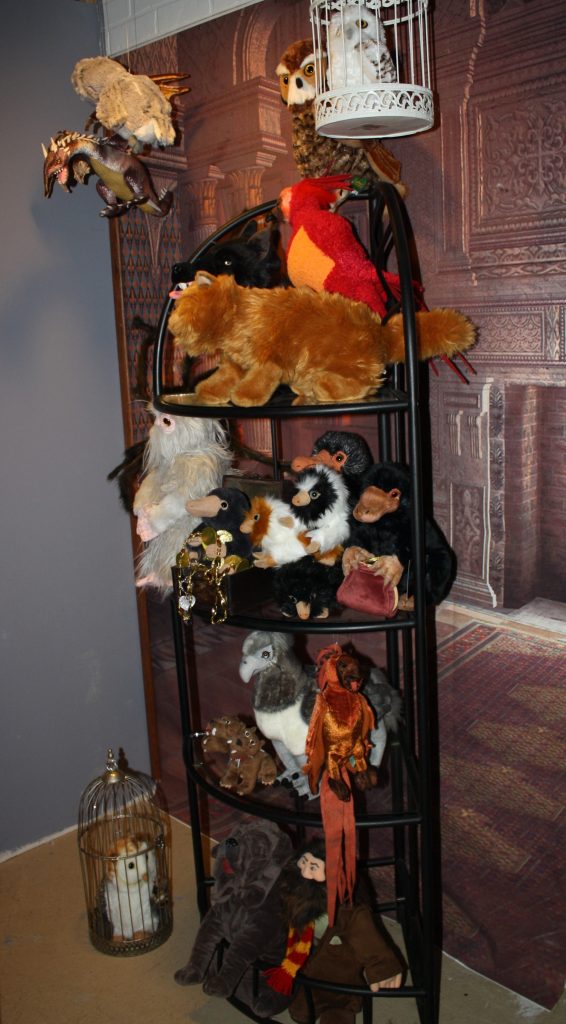 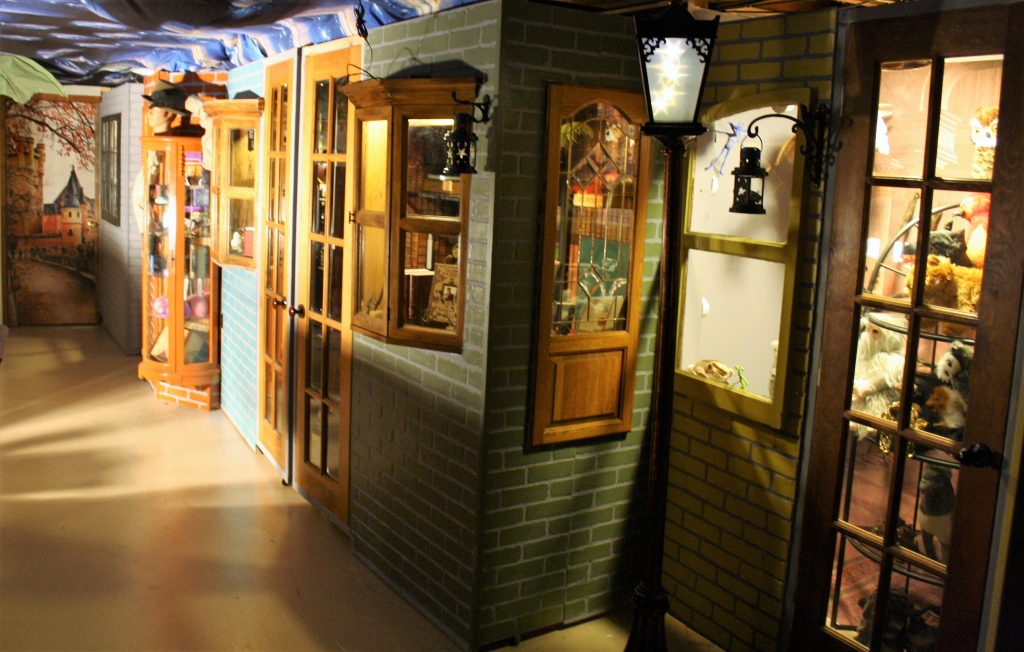 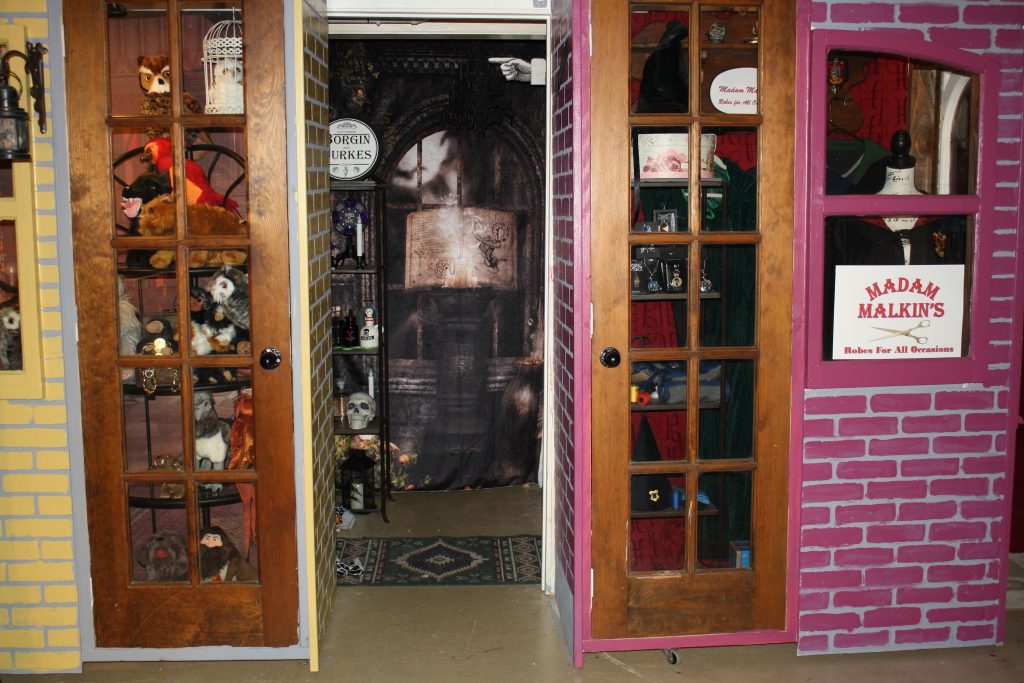