I had the privilege to see Harry Potter and the Cursed Child – Part One and Part Two on Broadway last week. I was lucky enough to watch it in London a year ago, but now I visited New York City and I did not want to miss the chance to see the original cast.

The London cast that I saw was really good, but the original cast (who will be replaced in March and it seems it isn’t going to keep working on any Harry Potter production for the time being) was absolutely marvellous. Jamie Parker as the adult version of Harry is just incredible – as is Paul Thorney with his funny Ron and Noma Dumezweni with Hermione. They are not only great actors on stage, but also kind people with the fans. If you have time and you wait for them at the stage door once the play is over, they will take their time to sign your Showbill and take a photo with you. How amazing is that?

The differences between both plays were none for me, except for the scene when Albus and Scorpius escape from the Hogwarts Express. I am not 100% sure, but if I recall correctly, in the London play, the train was formed with the suitcases that they use almost for everything (like the tombstones in the last scene). However, on Broadway, the train has its own prop to give the idea both teenagers are walking on the roof of the Hogwarts Express. It’s a minimal difference, but I liked the New York version more.

But what surprised me the most was that when we arrived at the Lyric Theater the second night, there was a survey on my seat to complete! It was done by the company ERm Research, and this survey is a set of question aimed to get more information about the people who went to watch the play, and their reaction. Questions like “How big of a Harry Potter fan are you?” or “Which of the following Harry Potter-related activities have you participated in?” seem to be there to know how many hardcore fans went to see the play, how many casual theaters fans, etc. It also asks some questions about yourself, like your age, gender and country of residence.

What is interesting is why they are doing this. Of course, they want to know everything about the audience, but why? Why do they care so much about what the audience thinks about the play, if 1) The play won a lot of awards, 2) It was praised by the critics, 3) And almost every show is sold out. Even with all the feedback in the world, they can’t change aspects of the play people say they don’t like now. They can change one line here or there, but the overall plot, effects and core elements have to remain the same.

From what I saw, not many people answered the whole survey. The problem was that people started to do it before Part 2 began, but the final section of the survey needed to be done after the second part finished. Completing a form after the play is over is a nuisance: you either want to discuss and fully enjoy what you have just seen, or you just want to leave the theatre, which is why most of people from the audience left the piece of paper in their seats.
It is curious that the production decided to ask questions of the audience, if it is just research or if there is an underlying motive, but for now the reason is still unknown (and may probably stay the same). Hopefully, the answers the production gets from this survey help improve the play, in a positive way. 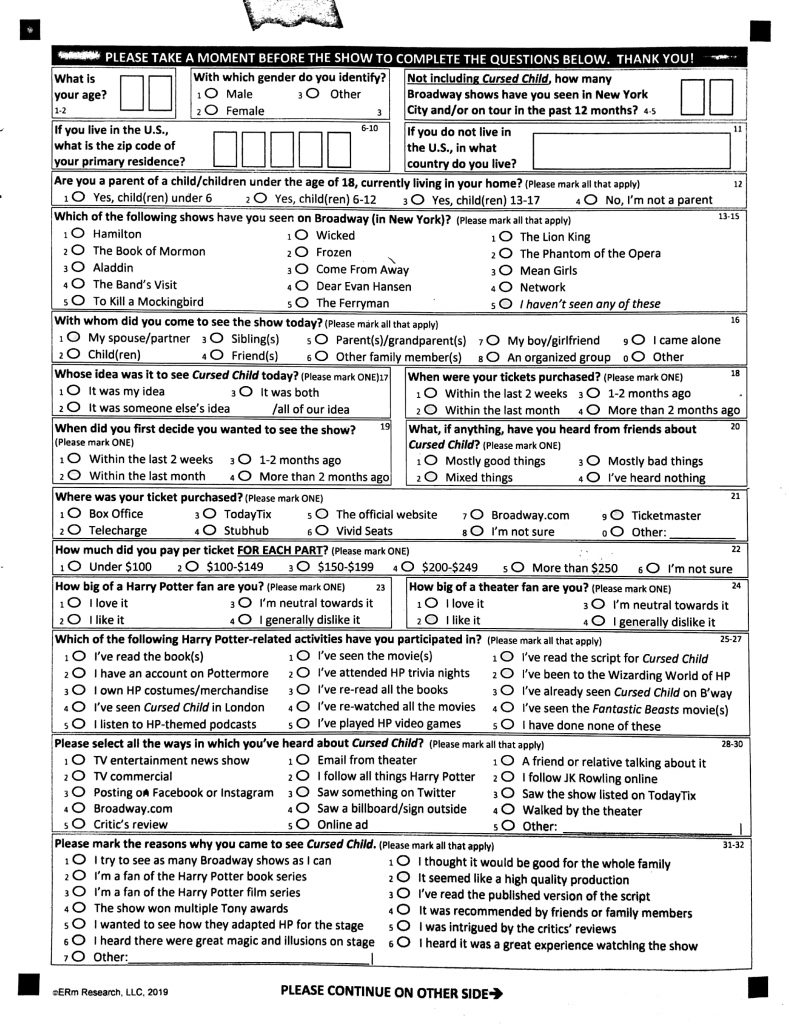 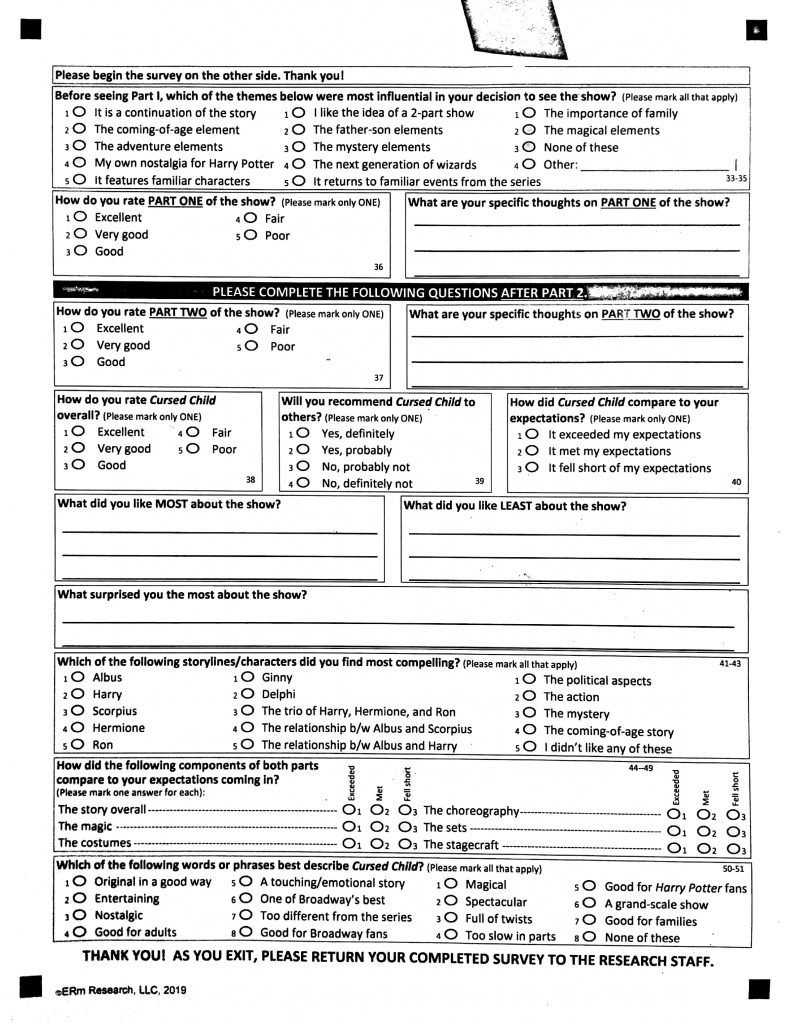 « The Wizarding World in my Basement
Deleted scenes from Fantastic Beasts: The Crimes of Grindelwald »