Until November, and since the first poster for the film was shared, Warner Bros. wanted to associate this new installment in the Fantastic Beasts series with the Deathly Hallows. They used the symbol in all the teasers, trailers, merchandise, posters, and even in the film title:

This is more clear in the digital image that the studio behind the logo created to show an example of how this logo would fit in merchandise (in this example, a shirt): 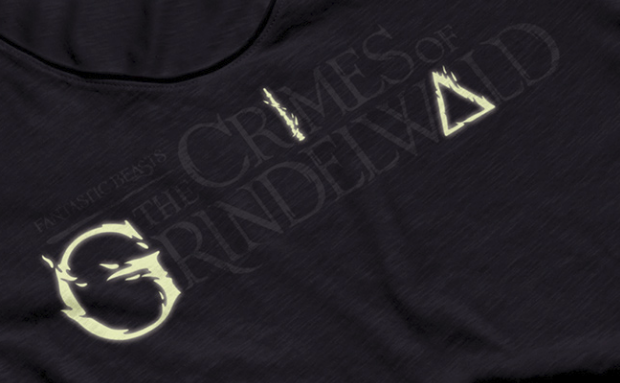 However, when the film was launched, some fans noticed something weird in the title sequence – right after Grindelwald gets his freedom back. The title did not have any of this special letters to associate it with the Deathly Hallows:

Why they decided to remove Deathly Hallows reference from the film? The first thought that comes to mind is that the “Deathly Hallows title” was created days after they finished the film, but we know this does not make any sense, because the “DH title” was featured a year before the movie was released, and since then they did a lot of modifications to it.

But why, then, Warner Bros. decided to promote the film with them? It seems that after Fantastic Beasts and Where To Find Them, Warner Bros. needed a stronger way to associate this new film series with the Harry Potter world. Using “From J.K. Rowling’s Wizarding World” was clearly not enough, and using Jude Law’s Dumbledore in the poster was difficult because people don’t associate the actor with the character (at least, not yet).

Then, to attract the now-adults Harry Potter fans who grew up with the books/movies, what would be better than the Deathly Hallows symbol, probably the most popular tattoo among then fans? And although they are not a vital part of this film, they are important in the following ones. So, even though it feels Warner Bros. cheated on us teasing the Deathly Hallows, it is understable from their side and a good move to attract Harry Potter fans who liked this story, but without the correct promotion would not have gone to the cinemas to watch it.