It was May 2004 when J.K. Rowling opened the new version of her official website. Up to then, the site had been just a list of the publishing houses that edited Harry Potter, but in 2004, jkrowling.com became an overhead view of Rowling’s desk, with animations, secrets, new canon and her characteristic humour. The site was updated in March 2012 and got a more professional look. However, the experience that the fans enjoyed during those eight years are part of the collective memory of the fandom, and can hardly be replaced.

J.K. Rowling used the site to answer frequently asked questions from the fans, to share extra material – such as excerpts that never made the books or ideas that she discarded -, to debunk rumours, but also for some important announcements. Just to be clear, they were possibly the most important announcements related to the Harry Potter books from those years. She used her website to reveal the titles and publications dates of Harry Potter and the Half-Blood Prince and Harry Potter and the Deathly Hallows. Back then the revelations were not a simple blog post (like the ones being published now), but a puzzle game that fans had to solve to get access to the information. Of course, after a few hours, fansites would release guides so the fans could solve these puzzles by themselves and see the title or the release date. However, during the first moments after someone discovered the door had been opened (more on this later), you felt the rush to be one of the first to know what book seven was going to be titled.

The door we mentioned before was to be opened when there was some sort of revelation coming up. It symbolized the secrets that Rowling was now giving access to. This door was part of the coherent design of the website, which resembled Rowling’s house. What do we mean? The homepage was her desk, but some sections of the site were other parts of her house. The Recommended Websites area was her bookshelf, and Extra Stuff was a wall with papers on it. The door, which never got an official name but fans used to called it “Room of Requirements”, was always closed with a “Do Not Disturb” sign. When the sign was out, it meant only one thing: it could be opened, and behind it there was an important secret to be revealed. 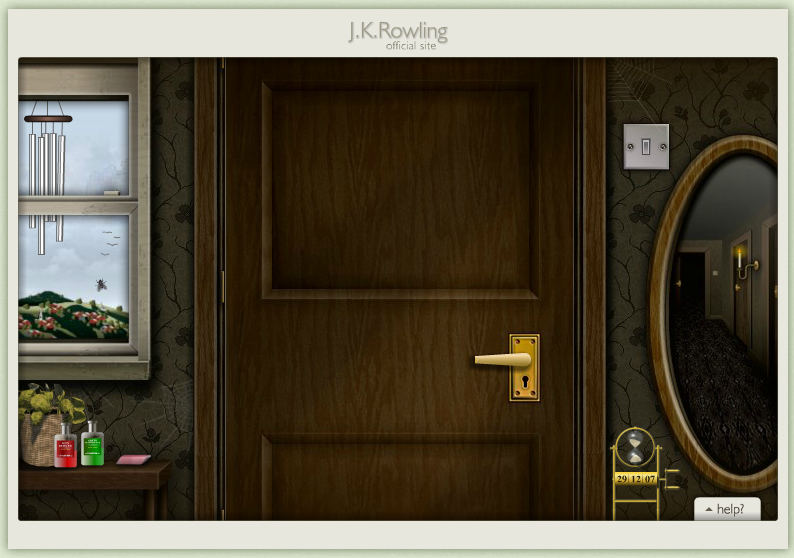 Apart from the announcements, the news, and the canon that Rowling decided to share on her website, there were the WOMBATs. We brought them back to life and we talked about them largely in our August issue (#16). Unfortunately, just as the WOMBATs disappeared back then, the whole website was lost when Rowling decided to switch to a more professional look. Some parts were saved as screenshots, some fans recorded the audio of the website on video and uploaded it to YouTube, and even some sections from the text-only version were available through the Wayback Machine (a website dedicated to preserve and save a copy of the internet). But looking at the old version just in fragments wasn’t the same experience at all.

Luckily for us, Roonwit, a Harry Potter fan, saved different versions of the Flash and Graphics files that were used to build Rowling’s website. The graphics were the “front” of the site, the visual parts that glue all the logic behind together and displayed it with animations that you could see. That set of files alone allowed us to explore the website, although the experience was still lacking some interaction. The puzzles and the animations were there, but the contents were not displayed as they should, for example.

That is what we have been working on in the past months. We’ve been re-doing the server side scripting of the old J.K. Rowling website, re-writing the logic and re-organizing files. We also coordinated our work with several Harry Potter fansites that helped us with the translations. Why? In the original backup made by Roonwit, not all the sections were saved in all the available languages. Because of that, we have to thank HarryLatino (Spanish), Gazette du Sorcier, and Univers Harry Potter (both French) for their work that made possible to have the website available in the original languages. 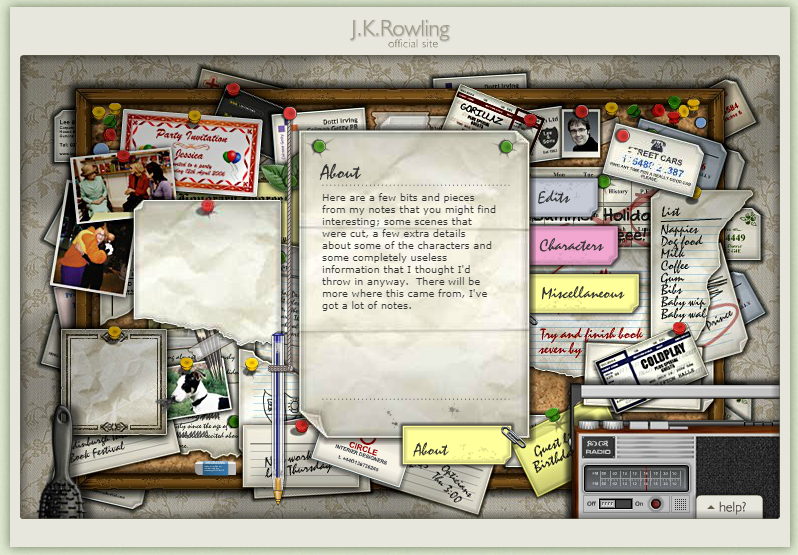 After all the work we have been doing in the past weeks, we are proud to present to you J.K. Rowling’s Original Website to the fullest. You are able to visit, navigate and explore not only the first or the last version, but every version that was ever up. That means you can see how it looked in 2004 up to 2012, with middle versions in 2005, 2006 and 2009. Also, we have set up a basic guide so if the website is new to you, you don’t feel lost. You can use the Basic Guide as a tutorial to learn how to go over the standard sections, or how to discover the secrets that are hidden on the site.

Finally, this project is just a non-profit fun idea that we thought it would be awesome for fans. We believe J.K. Rowling’s old website is important not just for the fandom but for the canon researchers, which is why it should be preserved.

We hope you enjoy your visit to the official J.K. Rowling website, which starts right here.

If you like what we do and want us to work on more projects for the fandom, remember that you can support us by becoming a Patreon. Read more about that here.

You are reading an article from The Rowling Library Magazine Issue 21 (September 2018).
Download the magazine to read all the articles, and if you like it, you can support us to help us create more content like this.

« Fantastic Beasts 3 to be set in China?
Exclusive: Photos from American Illustrated edition of The Tales of Beedle the Bard »