The American magazine Entertainment Weekly shared a new photo online from Fantastic Beasts: The Crimes of Grindelwald that sparkled a lot of discussion about the upcoming film and a specific character. In this photo, we see Albus Dumbledore (played by Jude Law) with a young Newt Scamander (played by Joshua Shea) in what it seems to be a classroom with other students from the Hufflepuff and Ravenclaw house. 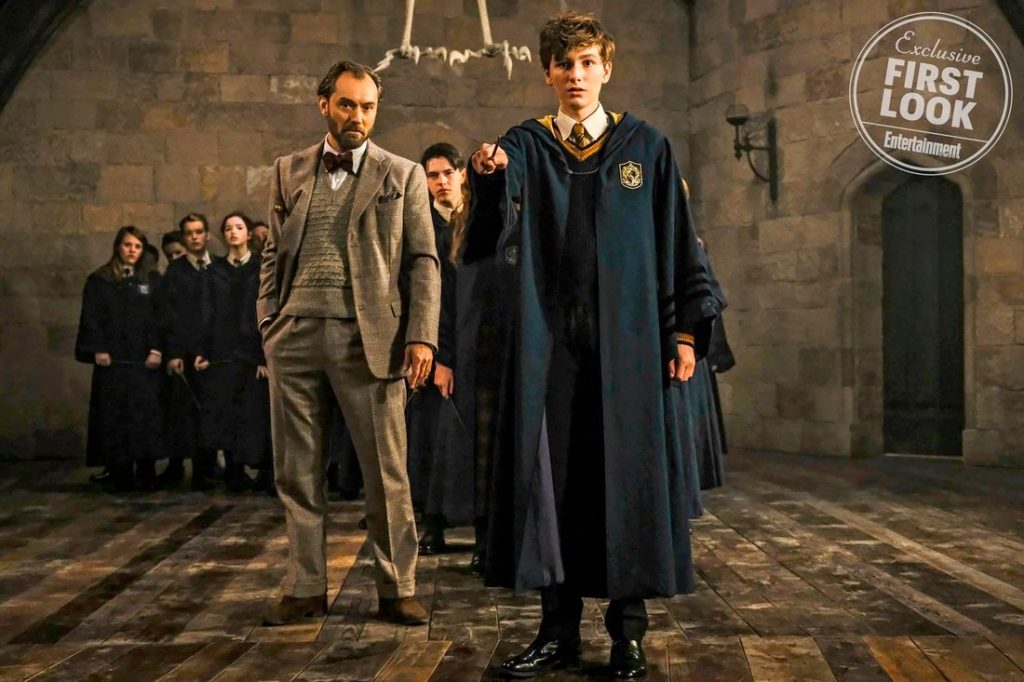 The setting reminds us of another class that took place in the movie universe of the Wizarding World. In Harry Potter and the Prisoner of Azkaban, Professor Remus Lupin taught his third-year students how to face a Boggart, the evil non-being that takes on the form of the viewer’s worst fear. Newt’s face and body posture are also similar to Harry’s in his Defense Against the Dark Arts (DADA) class: fear in the face but not danger. Because of the synopsis of some related books from the movie, we know too that the Boggart will play a role in this film. And as if this were not enough, at CinemaCon in April, Warner Brothers displayed a new clip from the film. Attendees said that one of the scenes that they showed was the very same one from the photo: Hogwarts Professor Albus Dumbledore teaching a class the Riddikulus spell (by the way, Newt’s Boggart turns into a desk because he is afraid of working an office job). Also, the first trailer showed us Dumbledore’s office, but curiously, it is the same set that was used in the first Harry Potter movies for the Defense Against the Dark Arts classroom. So if there are many connections between Dumbledore and that Professor position, why we are still doubting if he is going to teach DADA?

Truth to be told, Dumbledore being a DADA professor was never confirmed so far, and it would contradict (at least in a general sense) what we know from the original seven books. In Harry Potter and the Half-Blood Prince, Dumbledore tells us about a young Tom Riddle who asked the then-Hogwarts Headmaster Armando Dippet if he could remain as a teacher. Riddle wanted the position of Galatea Merrythought, who was teaching Defense Against the Dark Arts for “nearly fifty years”. Besides that, we know from Harry Potter and the Chamber of Secrets and by some Pottermore Writings that Albus Dumbledore was Transfiguration Professor at Hogwarts. These two main facts (Merrythought teaching DADA and Dumbledore teaching Transfiguration) would lead to a canon contradiction according to a lot of fans.

However, they are not a contradiction. The fact that Dumbledore taught Transfiguration does not mean he couldn’t have taught something else at another time. It is probably that he taught Transfiguration more than DADA, but it would not be the first professor to change subjects. In Harry Potter and the Philosopher’s Stone, Quirrell is a known professor at the beginning of the book, but it is his first year at DADA too, so we can assume he was teaching something else in the previous years. But most fans are okay with this, but they can not accept the contradiction with Merrythought teaching for nearly 50 years DADA. The problem is, the books do not say that either.

“Defense Against the Dark Arts. It was being taught at the time by an old Professor by the name of Galatea Merrythought, who had been at Hogwarts for nearly fifty years” are the words spoken by Dumbledore in the sixth book, and this doesn’t mean that Merrythought taught DADA for fifty years. He said she had been at Hogwarts for fifty years, which could mean she switched positions during that half a century. This would be a good explanation that does not contradict canon again. But even if she was teaching DADA for nearly fifty years, as a lot of people suppose from that Half-Blood Prince dialogue, there are still exceptions for Dumbledore to be the professor in that specific class.

Albus Dumbledore could be easily the substitute for DADA in case of absence of Galatea Merrythought, due to illness, a trip, or anything. It would not be the first case, as Professor Wilhelmina Grubbly-Plank filled in as Care of Magical Creatures teacher during the fourth and fifth book while Hagrid was unable to do it. 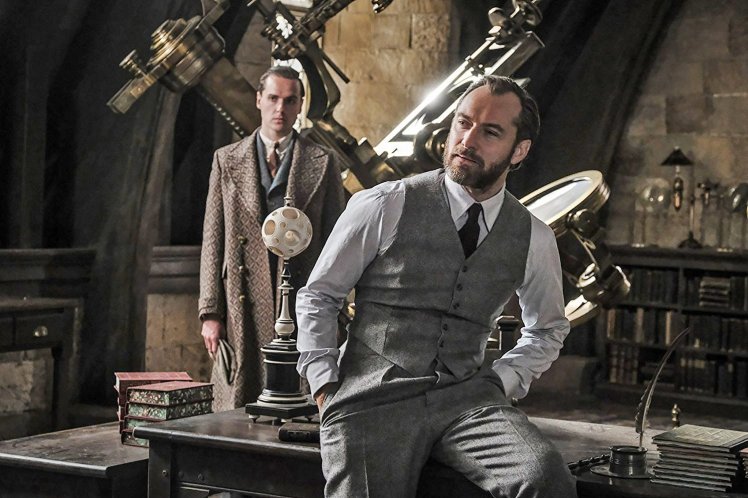 We have asked some canon specialist their opinion on this, and this is what they said:

“My response to Dumbledore teaching DADA vs canon of Prof Merrythought – Substitute Teacher! As a young Newt, he may have taught a class or 2. In FB2, perhaps Merrythought is out on extended leave…like Grubbly-Plank covered for Hagrid and Snape for Lupin!” S.P. Sipal, Author of Fantastic Secrets Behind Fantastic Beasts.

“I think it’s just another case of the movies ignoring canon as they are wont to do. True it could be Dumbledore substituting for Merrythought (similarly to how Grubbly-Plank subs for Hagrid during the fourth and fifth books), but this seems like it’s a single flashback scene and without much room for that type of complicated exposition. While it’s possible that they’re somehow being canon accurate here I think the most likely explanation is that this is as non-canon as Dumbledore’s muggle suit, Newt’s house tie, or the dragon skeleton hanging from the ceiling. The Harry Potter films have never cared about staying consistent with the books and this seems like a weird place to start.” Ibid, Curator of Reddit.com/r/RowlingWritings

“This would contradict canon, if that’s what the scene is trying to show. Merrythought was the DADA teacher at that time and Dumbledore was Transfiguration.” Steve Vander Ark, Creator and Editor in Chief of The Harry Potter Lexicon.

We are still four months away from the release of Fantastic Beasts: The Crimes of Grindelwald and just one photo allowed us to theorize a lot of things from one of the most beloved characters. Still, we will know the truth on November 16th, when the film hits cinemas around the world. What’s your thinking on this? Send your comments and opinion to our Twitter and Facebook accounts.

In a recent interview with Entertainment Weekly, Jude Law, the actor playing Albus Dumbledore, confirmed he is not teaching Transfiguration.

Q: So he teaches Transfiguration, right?

A: He doesn’t teach Transfiguration, actually, not at this stage.

Q: Oh! Because in Potter lore, it was said he used to be a Transfiguration teacher before becoming headmaster…

A: At this stage in his career, he’s not. I’m not sure I’m allowed to say what he teaches…

You are reading an article from The Rowling Library Magazine Issue 19 (July 2018).
Download the magazine to read all the articles, and if you like it, you can support us to help us create more content like this.