Jim Kay already started to work on the fourth illustrated installment of the Harry Potter series that will be published by Bloomsbury in the United Kingdom and by Scholastic in the United States of America. The British publisher said that the book was going to be released in “Autumn 2019”, but an official date wasn’t revealed yet.

Kay worked on the previous three books and is already working on “Harry Potter and the Goblet of Fire”. Bloomsbury wants him to be focused 100% on this – that’s one of the reasons why he was not appointed to work on any of the illustrated editions of the companion books, Fantastic Beasts and Where to Find Them (published last year), The Tales of Beedle the Bard (published this year), and the upcoming Quidditch Through the Ages (to be published next year). It is understandable though since Goblet of Fire is a complicated book to illustrate. What scenes are going to be included? And the question that many fans are asking is, how many illustrations will this edition have? 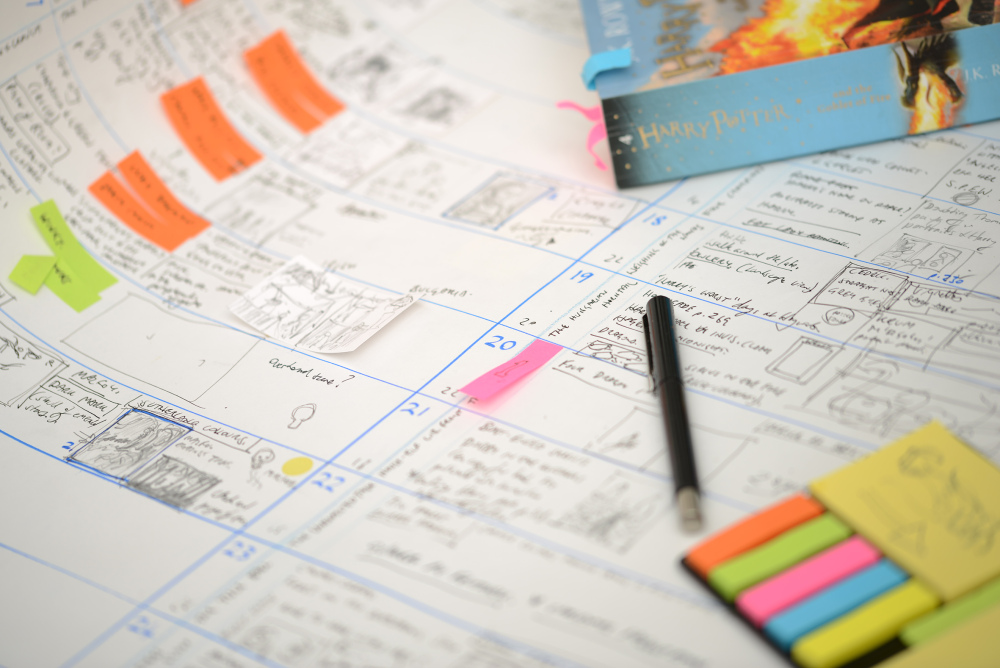 The image shows a grid, where each chapter is a row, and for each one he describes the possible scenes he is considering. For example, for chapter 19 “The Hungarian Horntail”, he marked “Hogsmeade”, “Harry under Invis. Cloak”, “Harry — Hermione?” and “Dragons”, among others that are hard to read. For the previous one, The Weighing of the Wands (Chapter 18th), he detailed “Walk around the lake”, “Owlery (landscape view)”, “Harry’s worsts days at Hogwarts” and “Cedric”, although there are at least four more possible illustrations that are illegible in the photo.

If we think that Jim is going to create all the illustrations mentioned in his plan, it looks like the fourth novel is going to have the same (or more) number of drawings per chapter as the previous ones. This makes sense considering he is taking two years to work on this book and since the number of images has duplicated since the past books. The problem, in this case, will be on Bloomsburys and Scholastic’s hands. They will have to typeset this book without transforming it into a monster of a few kilograms that is not only impossible to transport or hold, but also very expensive to produce and sell. It is possible then that Kay will develop mostly small vignettes that can be added next to the text or in the background, without the need of full pages that take much space.

Notice in the image the way Jim Kay takes notes: it seems that for some scenes he adds a small post-it index flag to mark the type of scene he has in mind – then he adds another index (of the same color) in the copy of the book he is reading as reference.

Although this image doesn’t confirm anything, I personally believe we are going to have a huge Goblet of Fire edition with the same ratio of illustrations and texts. If not, what’s the purpose of releasing these new editions? Let us know what you think on Twitter and Facebook.