It has been a year of anniversaries and milestones for Harry Potter: 20 years of the publication of The Philosopher’s Stone, a year from the opening of Cursed Child on the West End, and ten years of The Deathly Hallows release. But there is even more: this year will mark the release of the 80th translation of Harry Potter and the Philosopher’s Stone, or we should say, stane. Twenty years after its publication, the first installment in the series will get its translation into Scots this October.

Matthew Fitt is translating J.K. Rowling’s first novel and it’s not a process that has just started, but that has been in the making for quite some time: “[The project] really started when I first read Harry Potter and the Philosopher’s Stone soon after it was published. I knew it would read very well in Scots. That was the spark,” explained Fitt. The translation is being developed by the publishing house Itchy Coo, which specialises in literature in Scots. What is Scots you may wonder? If you are not from Scotland or the United Kingdom, you may be unaware that Scots is actually a language (don’t be confused with Scottish English, which is a variety of English, which means that it is English with a Scottish accent). Even though it shares some similarities with English, Scots and English are different. We asked Matthew Fitt, who is translating the book, to tell us a bit more about it: “Scots is a language spoken by over 1.5 million people. It is a sister language of English so some words are similar like coo/cow, heid/head and sang/song. But many words are completely different for example braw/good, shoogle/shake and dreich/miserable.”

The best way to see how much English and Scots have in common and how much differ is with this glimpse we got from the beginning of Harry Potter and the Philosopher’s Stane:

Like all translations, issues arise when it comes to deciding what to do with names, concepts or even invented words, which happens incredibly often in the Harry Potter world. Fitt commented on one particular term that brought about a bit of a problem: “Quidditch gave me a bit of trouble to start with so I imagined myself playing it. (I got quite good at it after a while.) I was looking for Quidditch-related words that everyone knows in Scots and finally came up with ‘broom’ and ‘ball’ which in Scots are ‘besom’ and ‘baw’. So Quidditch in Scots is now ‘Besombaw’.” However, aspects like vocabulary items are not the only ones that may pose a challenge, since translators have to be aware of the nuances of languages. Some difficulties may appear when you have to translate dialects, such is the case of Hagrid, who in the books sounds practically Scots: “Hagrid’s voice was tricky. (…) He’s also played by the great Scottish actor Robbie Coltrane in the Harry Potter films. But the Scots language is blessed with having many dialects and I knew I just had to find the right one for Hagrid so that he would sound different from the other characters. I went for my own dialect, Dundonian.” This is one of the many dialects that Scots has, as well Glaswegian, Ayrshire, Edinburgh Scots, Borders, Fife, Shetland, among others.

The imprint behind the translation knows a thing or two about Scots, if you know what we mean. The publishing house Itchy Coo specialises in the translations of books into the Scots language. It was founded by Matthew Fitt and James Robertson in 2002, so Harry Potter and the Philosopher’s Stone is not one of their first projects. In fact, they have produced 36 titles sold almost a quarter of a million books, which include Roald Dahl’s works and The Guffalo, among many others. They have been translating popular children’s books into Scots language for 15 years now in partnership with Black & White Publishing, and support from the National Lottery, and the Scottish Arts Council. Itchy Coo mains objetive is to “encourage better understanding and greater acceptance of the Scots Language in education and in all aspects of Scottish life.” 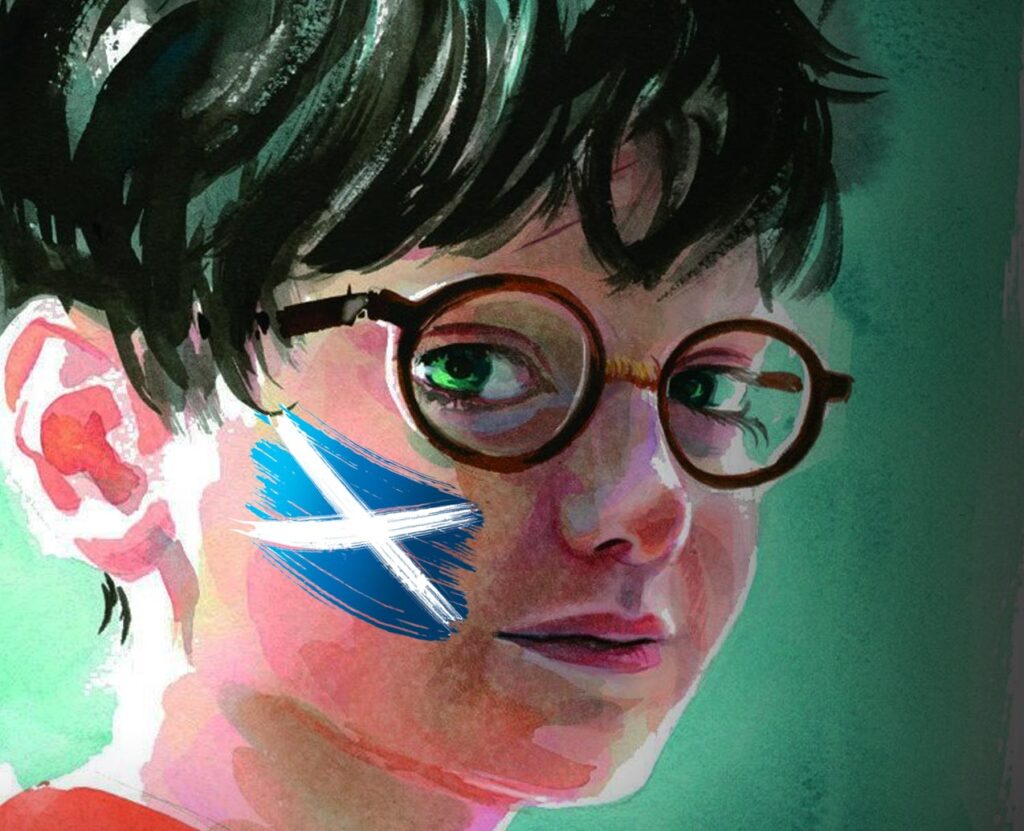 Harry Potter and the Philosopher’s Stane must be one of the most important works of the imprint. The project is a reality but it’s still not complete, so there is still no word on whether the book will get a new cover or if it will remain with the original Thomas Taylor drawing. However, it is exciting news for the Scots community and although Fitt couldn’t give away much of his work on the Philosopher’s Stane, he hopes that it is a way of putting Scots on the map: “Although Scots is spoken by one-third of all Scottish children and adults, it does not receive much attention from Scottish society as a whole. The publication of a book like Harry Potter and the Philosopher’s Stone in Scots may encourage people to take Scots more seriously.” We certainly expect that the 80th translation of the wizard boy does the trick.

Harry Potter and the Philosopher’s Stane is expected to be released in October 2017.

You are reading an article from The Rowling Library Magazine Issue 10 (August 2017).
Download the magazine to read all the articles, and if you like it, you can support us to help us create more content like this.