“Imagine being a young 17-year-old boy who has everything going for him, a senior prefect, full colours, a good athlete, then imagine having all that taken away from you in a split second.” That’s how Henry Fraser starts telling his own story. In 2009, he was a 17-year-old rugby player who liked to spend hours kicking a ball around in his garden with his three brothers. But an accident in Portugal while on holiday with friends changed everything. It left Henry with life-changing injuries. He’d displaced four vertebrae in his neck and crushed his spinal cord. Eight years have passed since his accident, where he has faced countless operations and illnesses, but he has always carried with him an incredibly positive and inspiring spirit. “When I was younger, I was physically tough but not mentally strong. Now it’s the other way around,” he says.

With no movement or feeling in his hands, Henry now mouth-paints using a specially developed stylus and easel. He’s built up a large body of work, including paintings of Harry Potter, Thierry Henry, Usain Bolt and David Beckham. It was in 2015 when J.K. Rowling herself wrote back to Henry on Twitter. “Fate shoved you through an unexpected door and you lit the way for others”.

In only three months, this September, Henry will publish his first book: The Little Big Things: A young man’s belief that every day can be a good day. Mixing his own stories of facing adversity with his talent as a motivational speaker, Henry shares his wisdom and insight into finding the gifts in life’s challenges. As the book description says, “[it] will resonate with anyone facing an obstacle, no matter how big or small”. The book carries good news with it for us, because it will include a foreword by J.K. Rowling, which means we will have another text by Rowling to add to our bookshelves. Hooray! 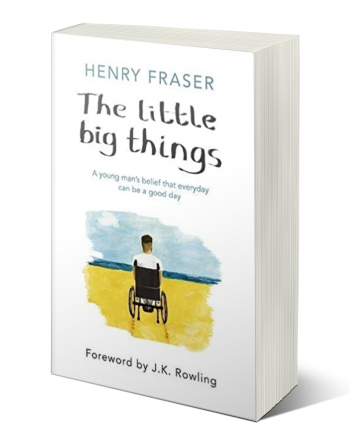 You are reading an article from The Rowling Library Magazine Issue 8 (June 2017).
Download the magazine to read all the articles, and if you like it, you can support us to help us create more content like this.