Walking into Carnegie Hall, the feeling was electric. The buzz of excitement and anticipation was contagious. Everyone in the room had that Potter craze; you could see it in their eyes, and especially in their clothes. The costumes were outrageous and amazing. I must have walked by a dozen Newts, each costume better than the last. The crowd kept growing, soon the entire lobby was filled with crazed fans, all waiting for the clock to strike six.

As everyone found their seats, you were met with a beautiful sight; hundreds of Potter fans with smiles plastered on their faces, talking animatedly to their neighbors and sharing their love for the magical world. The sense of community and togetherness was truly inspiring. As the lights began to dim, a thick silence fell over the crowd. When Eddie Redmayne stepped out of the wings, the crowd was cheering with utmost enthusiasm. Though the excitement was great for Eddie, nothing could compare to the wave of energy released when he announced J.K. Rowling. The hall instantly erupted into claps and cheers, and when she made her appearance, the entire crowd was on their feet.

Here was the woman who gave us an entire world of magic; the gratitude and love expressed by the crowd could not be contained. Eventually the crowd was settled and Eddie engaged Rowling in a conversation about her incredible organization, Lumos. She explained that it all started with a newspaper article of a child locked in a cage in a very dangerous orphanage.

She flipped past the article on the boy, trying to ignore the terrible sight, but instantly felt “ashamed.” She realized that she couldn’t let these awful orphanage situations continue; and Lumos was created. Rowling described how early childhood is a crucial time for brain development, and children in orphanages were not developing as they should. Additionally, most orphanage systems are extremely corrupt, and involve dangerous business such as child trafficking. Lumos was created to stop these systems, and to place children back with their families, or families that can take care of them.

Rowling aimed to emphasize the importance of relaying the message that orphanage systems are unhealthy and often run for the wrong intentions. She kept repeating the idea of spreading Lumos’ message about orphanages, and getting the word out about the misconduct of these institutions. With each word she said, you could feel how connected and passionate she was to this cause, and how determined she was to end orphanages.

She stated that Lumos’ goal was for the world to be completely orphanage free by 2050. Rowling stressed that while this goal seemed impossible, she holds hope that we can make this dream a reality. She ended her talk on Lumos with a video featuring actress’ Bonnie Wright and Evanna Lynch. Both young ladies had recently traveled to Haiti to aid the people there with the rebuilding process after Hurricane Matthew. The women were shocked, by not only the way people were living, but the horrible conditions of the orphanages and children. The video not only supported the message Lumos was trying to spread, but gave a voice to the orphanage problems that Lumos is fighting against.

After putting down her Lumos notes, and noticeably relaxing; Rowling and Eddie began to discuss the film. Eddie asked her about her first time writing a screenplay to which Rowling responded, “I learned how to write a screenplay, while writing a screenplay.” She admitted that Fantastic Beasts began as story for her. A story about the famous textbook author Newt Scamander; a character Rowling had fallen in love with. As she discovered Newt’s story, she turned it into a screenplay, which according to Eddie was unlike any screenplay he had ever read. She claimed that it was difficult for her to limit her descriptions, as she could see how she wanted everything so clearly in her mind. The audience was hanging on to every exchange between the two. Listening to these two important figures animatedly discuss the magical world was incredible. The room was filled with a special warmth that could only be created by such passion and love for our magical community. The discussion ended, with the entire cast of Fantastic Beasts invited on stage to greet the Potter fans and introduce this spectacular movie. Overall it was a wonderful night, filled with magical moments, and a new story for the wizarding world. 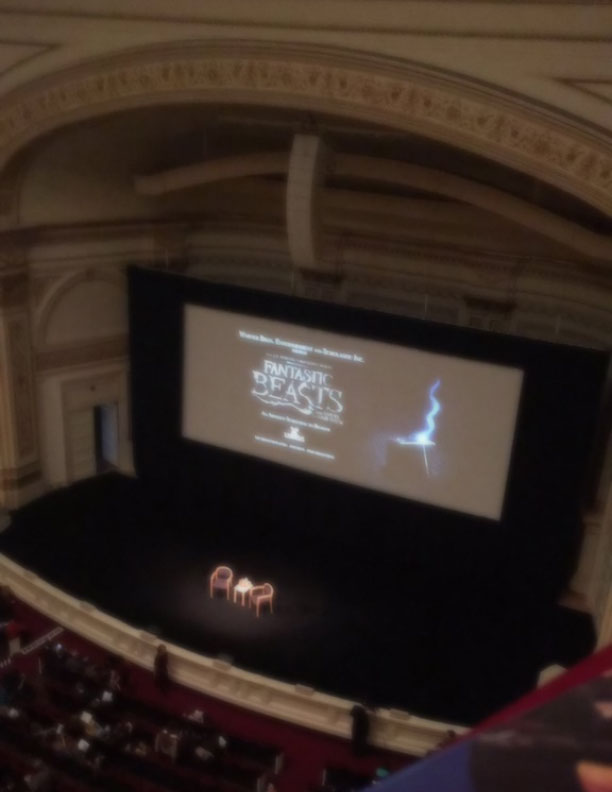 You are reading an article from The Rowling Library Magazine Issue 2 (December 2016).
Download the magazine to read all the articles, and if you like it, you can support us to help us create more content like this.

« In London with the fans
Who wrote the Ilvermorny School Song? »