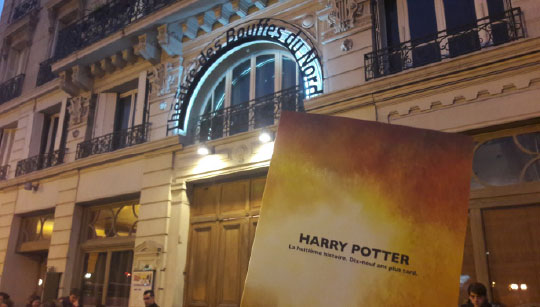 Last month, we were invited by publishing house Gallimard Jeunesse to attend the release party of Harry Potter et l’Enfant Maudit in one of Paris’ most beautiful theaters. Here is our report from the event.

To be honest with you, we weren’t totally sure what kind of event we were going to attend on the 13th of September. The invitation wasn’t revealing much. All we knew was that we had to be at the Théâtre des Bouffes du Nord at 7 pm. We arrived right on time, to see a group of 50 to 60 people waiting at the doors. They started letting us in not so long after, trading our invitations to a lightning bolt stamped mark on our hands in case we wanted to exit and come back.

We had never been in this 19th century theater and all we can say is it didn’t fail to impress us. It looks it has never undergone any refurbishment: everything from its walls to its painted ceiling carry all the markings from decades and decades of events.

Gallimard Jeunesse had the theater’s corridors decorated to look like Hogwarts. On the walls, old paintings were hiding the bricks and various kinds of mirrors were displayed. All the doors had signs on them, indicating Dumbledore’s office, the Girls bathrooms or the Potions classroom.

A glass of champagne in one hand, we started walking to the theater itself, and were amazed by what we saw. On what would be the stage itself, several things were displayed. Long pieces of fabric were hanging from the walls, with pictures of owls, does and other animals projected on them. Behind them, a few candles were flying while a pianist was playing tunes that sounded very much like Imogen Heap’s. People started queuing up here and there, either at the buffet to grab some food, or at the photo booth where we could take pictures dressed up as wizards and witches. Gallimard Jeunesse kindly left a few magical hats and Harry-like glasses for the attendants. Nearby, some kids were having a long chat with the Sorting Hat himself, who we should say was very funny and entertaining. In the middle of the stage, a paper sculpture or a man and a woman was moving magically on a small stage, making the two of them dance through the whole night. It was pretty magical.

While we were eating, and chatting with a few journalists attending the event, some guy started whistling very loud. When he had caught our attention, he started waving a plastic bag in the air. He then stopped suddenly. The thing started moving and flying by itself, apparently directed by the man who appeared to be a magician. After a few minutes of impressing everyone, the guy was soon replaced by giant Dementors who spent about a half-hour crossing the crowd and scaring everybody.

At some point during the night, we even bumped into Sybill Trelawney babbling uncomprehensive things. We decided to follow her to a room nearby, where she invited us to sit down and read our future in tarot cards. The results, wethink we are not allowed to write in here. That said, we can tell you that the Trolley Lady from the Hogwarts Express was sweet to everybody and handed out candies to almost every Muggle who went talking to her.

Around 10pm, employees from Gallimard Jeunesse started handing out books to all the attendees. With everybody gathered in the theater, we spotted a few well-known faces amongst the French Harry Potter fans. Gallimard Jeunesse’s CEO was there, and she was absolutely sweet. Though we didn’t chat for long, it was very interesting and we learnt that one of J.K. Rowling’s agents spent part of the evening with us at the theater. We also saw Jean-François Ménard, the French translator for everything Harry Potter-related who accepted to chat with us and sign the book.

We had a blast at this Hogwarts-looking Théâtre des Bouffes du Nord, thanks Gallimard Jeunesse for organizing this magical evening!

« Handwritten copy of The Tales of Beedle the Bard to be auctioned
How many students are at Hogwarts? »