In Buenos Aires, Argentina, there was also a party to celebrate the launch of the eight story, Harry Potter y el Legado Maldito. 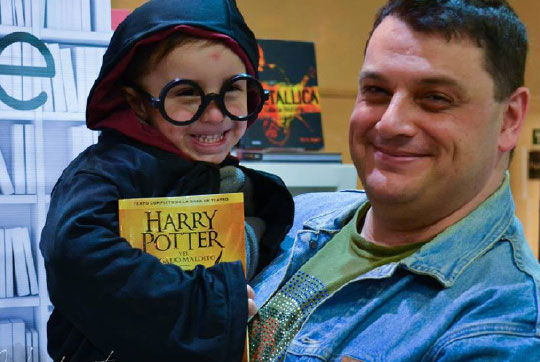 On September 27th, 2016, magic was spread to every corner of Recoleta, one of the poshest barrios in Buenos Aires, Argentina. That Tuesday night, hundreds of Argentinian wizards and witches gathered at Recoleta Mall to celebrate the release of Harry Potter y el Legado Maldito (the Spanish translation of Harry Potter and the Cursed Child).

Harry Potter fanclub CHP Argentina was the event organizer along with Cuspide bookstore, which started selling the books as soon as Tuesday turned into Wednesday. CHP Argentina is a 10 year old Harry Potter fanclub with a staff of 15 people (counting Heads of Houses and Prefects) that has been doing events for every book release, both in English and in Spanish, and several themed meetings throughout the year, such as Valentine’s Day, the Anniversary of the Battle of Hogwarts, Halloween, September 1st, July 31st, and the Yule Ball on Christmas.

Activities started at 10pm in a set stage in the middle of the mall’s hall. The first activity was the Sorting ceremony, in which both children and adults participated, anxious to hear the Sorting Hat’s decision. After a curious majority of new Gryffindors were sorted, there were 2 trivias held on stage with amazing prizes for the winners.

In the meantime, people who didn’t want to go on stage could get into the bookstore and purchase Harry Potter themed merchandise crafted by CHP Argentina, such as Deathly Hallows hats, beanies, stickers, necklaces and Snitch bracelets.
The last activity of the night was a costume contest. The judges were Madame Malkin’s not-as-famous sisters whose taste in clothes was rather… special. After several people showed their best costumes on stage, the winners were two 3-year-old kids dressed as Harry Potter and Hermione Granger, and a very sexy Dumbledore with a pantyhose underneath his robe.
Ten minutes before Tuesday midnight, while everybody started lining up in order to get their books, two people from CHP Argentina started reading the epilogue of Harry Potter and the Deathly Hallows to keep the momentum going. And at 11:59pm, the countdown started.

It was a matter of minutes before everyone who got the book left hurriedly to read it a home with a smile on their faces. Getting the chance to be part of a book release after so many years always brings back a lot of old memories, and this time wasn’t different…

We want to thank CHP Argentina for this report of the event – and Warpaint Photography for the photos.

« Order of the Phoenix: BookExpo America Edition
Handwritten copy of The Tales of Beedle the Bard to be auctioned »