TODAY Show broadcasted an interview with J.K. Rowling this morning in which she talked about Lumos and also about her most famous character, Harry Potter. While promoting her charity Lumos USA in New York City this week, Jo participated in this double interview. Watch the videso of the interview below.

On Friday, this is what she said about Harry Potter,

“No,” she said. “But even as I answer that I know that someone’s cutting this on YouTube to make it as though I gave you hope.”

So, just to be clear, she added, “I’m afraid I haven’t been writing the next Harry Potter.”

“I’m stepping back into that world, writing the script for ‘Fantastic Beasts and Where to Find Them,'” she said of her 2009 wizarding world tome that’s headed to the big screen next year. “So, you know, that door is always opened to me. But I think ‘Harry Potter 8,’ as in what happened next to Harry, Ron and Hermione — I don’t think that’s going to happen.”

“If you’re literally faced with a situation where you’re being told, ‘Well, your child can starve or we’ll put it in the institution and it will be fed,’ what are you gonna choose?” she explained of the dilemma families face. “You want your child to live, right?”

“I definitely will write for children again, ’cause I love writing for kids,” she added. “So that will definitely happen, and that will sit comfortably alongside this work [with Lumos]. And maybe I’ll get to read that new work to some of these children.”

On Monday, she talked about her upcoming birthday, fans and more:

“It’s a wonderful thing to hear,” Rowling told Lauer. “There are things I am bored of hearing. But it’s certainly not, ‘I really love your work and you taught my children to love books. What’s better? That’s an incredible thing to hear.”

Another thing Rowling said she’s proud of — her Harvard commencement speech in 2008. Titled, “The Fringe Benefits of Failure, and the Importance of Imagination.” The speech earned more than 1 million views on YouTube and an illustrated version of the speech will be released as a book later this month.

“I don’t think we talk about failure enough,” she said. “It would’ve really helped to have someone who had had a measure of success come say to me, ‘You will fail. That’s inevitable. It’s what you do with it.'”

Rowling said she was proud of the speech because it frightened her. “I’m normally proudest of myself after I’ve done something that frightens me because I, you know, believe in courage, and I think that it’s the virtue that ensures all the others, as Winston Churchill said.”

“I really mean this and, not trying to bring the mood down, I promise. But my mother died at 45,” she said. “From the heart, I mean this, you’ve gotta celebrate every year you’re here in good health.” 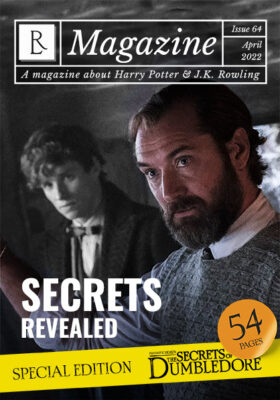 « J.K. Rowling launches Lumos USA
Do Judge A Book By Its Back Cover, by Peter Kenneth »