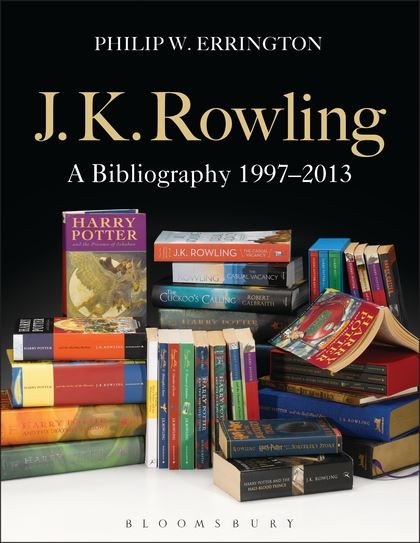 It is hard to think of someone else than Philip Errington to write this book. Dr. Errington joined Sotheby’s in 1999, and is now a Director of the broker of art and collectibles. Specialist in books and manuscripts, he is the one who broke the world record and sold the autographed manuscript of J.K. Rowling’s The Tales of Beedle the Bard in December 2007.

This bibliography reunites the details of every J.K. Rowling publication in the United Kingdom and the United States until 2013, including first and later editions, but also proof copies, pamphlets, and every publication (such as newspapers) where Rowling collaborated through an article or foreword.

Its high price ([wordery isbn=9781849669740]$94/£61 on Wordery with free worldwide delivery[/wordery]) could be because its glossy pages with photographs of the analyzed copies. I must note that though the book is very complete and a must for every Harry Potter collector, we found a missing edition on its catalog. We already reported this to the author and with a little luck it will be fixed in future editions of The Bibliography.

To be honest, Errington’s book is the book that I would have loved to write. Working alongside with J.K. Rowling’s office and her publishers, Dr. Errington reviews the various publications of Rowling’s work, explaining their details, how to identify them and telling stories about their creation. It is the definitive source for Harry Potter collectors and scholars, without a doubt.