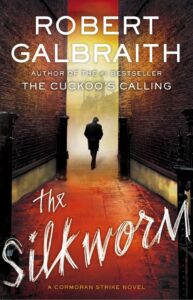 The Cuckoo’s Calling sequel has been announced: The Silkworm will be released on June 19th on the United Kingdom (Little Brown), and June 24th on the United States (Hachette Book Group). Robert Galbraith/J.K. Rowling will be taking part in the Theakston Old Peculier Crime Writing Festival in Harrogate, on 18th July at 7:30pm, in conversation with Val McDermid. This is the official website for the Festival.

« The Cuckoo’s Calling – Robert Galbraith
Was Bombyx Mori the original name of The Silkworm? »