I must admit that when Pottermore was announced over a week ago, I thought it would be something amazing and that it would change the Harry Potter fandom. Now I am not only disappointed with the final result, but also with the way the fans were treated.

Firstly, we had to wait for an announcement that wasn’t even live, simply a two-minute pre-recorded video in which JK Rowling barely clarifies what this website is about. It’ll be some sort of social network with an online store, with fan fictions and a small encyclopedia, along with never-before-seen games and new magical experiences. Not only did they have all the fans restlessly waiting for what they believed was a launch, but now we have to wait until October. They are playing with the fans’ anxiety, even if Rowling did thank them wholeheartedly in the video.

Moreover, Pottermore is not a great website for fans. It is clearly a publicity stunt (that is way too interactive) in order to introduce the Ebooks into the mass market, something that is completely new to the Harry Potter publishers. If they had been introduced into the market like any other electronic book, the sales wouldn’t have been as expected. But with the printed book sales so low right now and the publishers’ need to continue to make profit out of this worldwide phenomenon, the only solution is to create an exhaustive campaign that will eventually lead the fans to buy the electronic versions. Not to mention the online store, which will include stuff especially designed for the fandom.

In the official press release, it was promised that the game will be faithful the original plotline of Philosopher’s Stone, stating that we would start our first term at Hogwarts in October and that Year 2 would soon follow in 2012. Clearly, like any other publicity stunt, if the sales don’t improve the site will not be updated anymore and will only keep on living due to the fans’ actions and enthusiasm, and even without the promised help that Rowling initially offered.

If not, how could someone explain the thousands of dollars invested in development and promotion for something that, in theory, would only favor the fans? How to explain the hiring of professionals and the years of planning with so much precaution (they registered more than 150 domains in allusion) if they don’t expect to gain anything in retribution? Above all, the iconic Sony logo stands out at the top of the site, so that we don’t forget with whom we’re dealing.

It is a pity that after all those profitable years JK Rowling’s brand will be sold to a company that will generate a campaign that will excite fans (and for that very same reason, disappoint them,) and that, in the end, is only looking for more earnings. 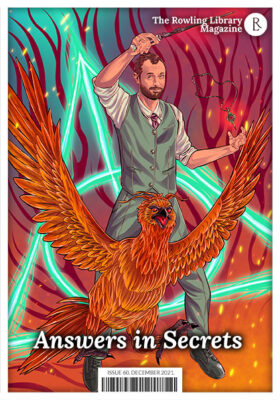 « We discovered the ten letters of Secret Street View: J.K. Rowling new Big Announcement
I owe the most to the Harry Potter fandom »